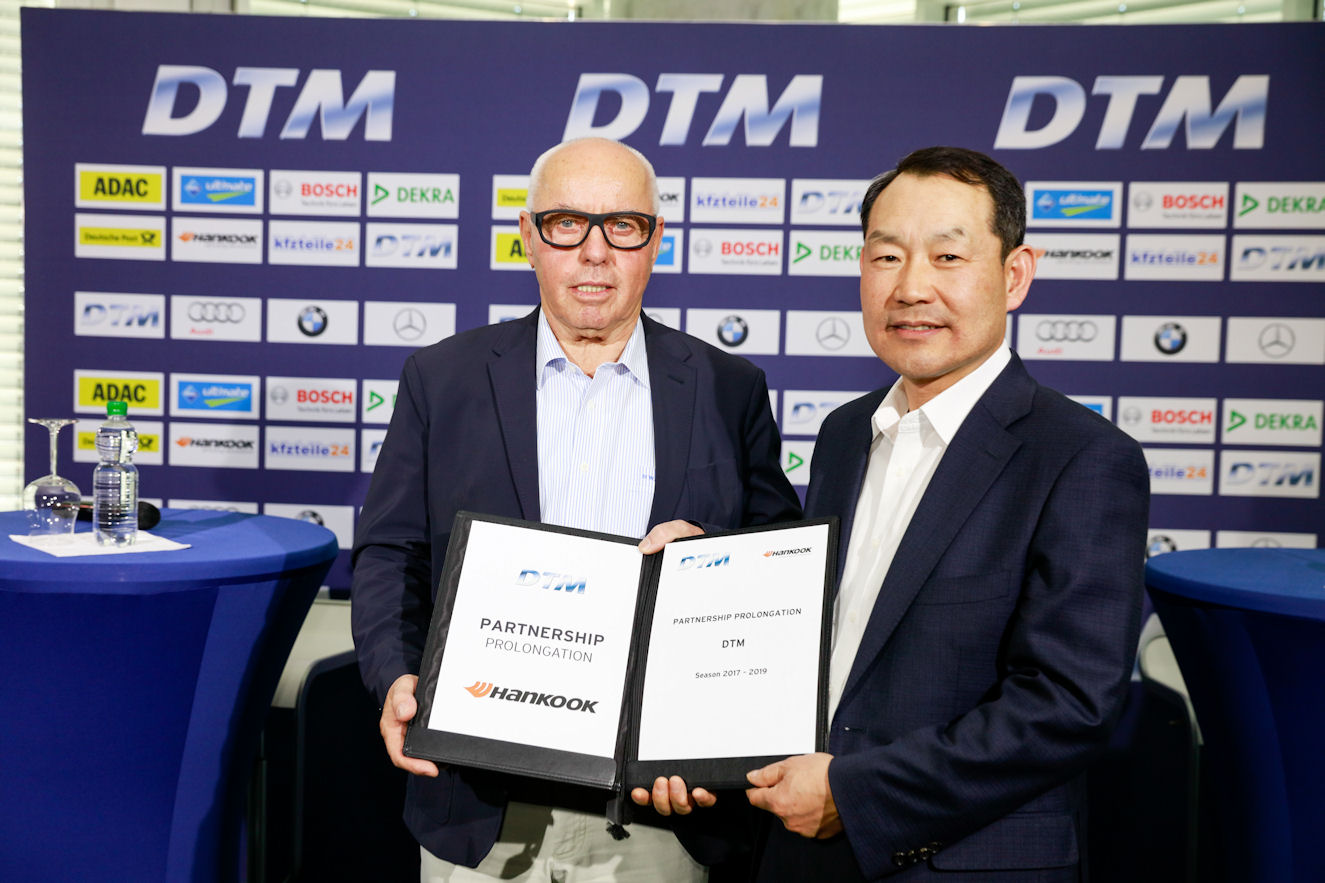 The existing partnership between Hankook Tire and German touring car championship DTM has been extended for a further three years. The tyre maker signed a new contract with DTM promoter ITR e.V. last Friday following the press conference held for the opening of the current season; under the terms of this contract, Hankook will continue to deliver its Ventus Race DTM tyres to Audi, BMW and Mercedes-Benz until the end of the 2019 season.

“The trusting cooperation with Hankook, the performance capability of the company and its tyre technology has led to us extending our partnership with Hankook,” said ITR chairman Hans Werner Aufrecht. “With regard to further internationalisation and future technical regulations, the professionalism which we have come to know and expect from our tyre partner Hankook is a major factor.”

“DTM is the most successful touring car series internationally,” added Ho-Youl Pae, head of Hankook Tire Europe. “The direct involvement of the three premium manufacturers – Audi, BMW and Mercedes Benz – means that there is no similar power density anywhere else in motor sport, particularly at the highest technical level possible. We are proud that DTM will enter a new era from 2017 with us as their exclusive tyre manufacturer. We will continue to reinforce their trust in us.”

Hankook has supplied tyres to the DTM since 2011. Regarding the contract’s extension, Manfred Sandbichler, Hankook’s motorsport director Europe, said “DTM is one of the top class motor sport series from around the world. It attracts many hundreds of thousands of visitors to race tracks every year, and it is broadcast in more than 175 countries. DTM’s extension of the contract with Hankook is testament to our technological know-how with tyres, which has been developed over 20 years of racing sport experience.”

Representatives from the three vehicle manufacturers also expressed their approval of the partnership’s continuation. “We are absolutely thrilled with Hankook’s performance. The quality of the racing tyres is always of a consistently high standard,” commented Dieter Gass, head of DTM at Audi Sport. Jens Marquardt, BMW Motorsport director, added that BMW’s collaboration with Hankook offered a “constant dialogue” that enabled the two parties to find the “best possible compromise between performance and durability.” Ulrich Fritz, head of Mercedes-AMG DTM, referred to Hankook as a reliable tyre partner, adding: “We are pleased that the contract has been extended.”