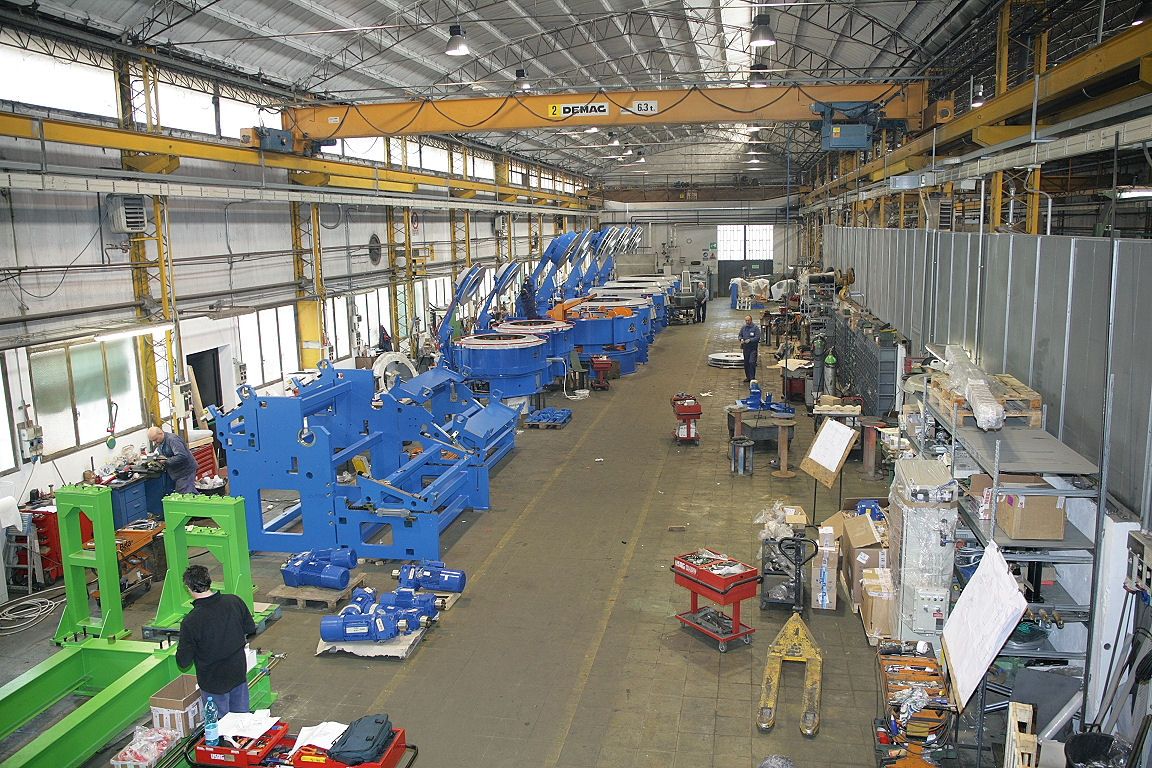 Cima Impianti – which has been headquartered in Pistoia, Tuscany since 1953 – has from the very beginning focused upon the manufacture of tyre retreading equipment, particularly presses for mould cure retreading, and, in the past decade, on CNC buffing machines for passenger car, truck and OTR tyres.

While Cima Impianti’s expertise in tyre vulcanisation has continued to grow over the years, so has the number of new tyre production facilities and plants manufacturing rubber tracks, rubberised wheels, solid tyres and other specialised products; in response, the Italian firm has successfully expanded its field of business and opened new horizons.

Through Cima Impianti’s activities in new business areas such as the construction of plant equipment, the company has drawn ever closer to a completely new sector, steel processing. Its activities here are managed by a team of business and technical staff, and over the years this business of designing, building and installing machinery and facilities commissioned by ‘third party’ customers around the world has grown into a significant proportion of the company’s turnover.

Another relatively new business area for Cima Impianti and one that now commands its own department in Pistoia is the trade in consumables. “This is a new activity for us,” comments Daniela Fanti, sales manager at Cima Impianti. “It is highly specialised and we require specifically-trained staff for it. But we can draw upon the knowledge of our other departments – such as retreading – where we precisely know our customers’ needs and requirements. We have a comprehensive product catalogue that contains a lot of items that are needed and used daily in workshops. As in other areas, the important thing for us here is the quality of the products and the partners that stand behind them.”

The aim of being aligned with customer requirements isn’t just important for these new business areas, rather it is a goal that has also transformed Cima Impianti’s production programme. Daniela Fanti explains: “Our industry increasingly demands specialised products. While products on offer in the 1990s were often a standard range, this hasn’t been the case for some time now. Customers have become more demanding and their needs and requests more specific. These days we frequently operate something akin to ‘custom manufacturing’ with the various components that go into the machinery and facilities we make. This concept covers simple aspects such as colour, but also many items such as the process control system and the choice of software. Today, 50 per cent of our production is individualised according to specific customer needs and requirements. Maintaining close contact with our customers is therefore particularly essential as it is a significant factor in our product quality and the further evolution of our products.”

Regarding markets, Fanti says that a present in numerous countries involves being confronted with “diverse conditions”. While market conditions are weak in some countries, demand in other markets is increasing. Generally speaking, the retreading of 4×4, passenger car and of course particularly commercial vehicle tyres is a significant business in Europe, with the last two of these market segments coming under pressure of late from imports of new tyres from China. Cima Impianti opines that the quality of these fast-growing imports can sometimes be an issue, for retreaders as well as for end consumers.

Of course, if pressure upon retreaders is not good for companies like Cima Impianti, the same applies when new tyre makers face pressures. To avoid such problems, the Italian machinery manufacturer has not only opened up new business areas, it has also recently focused upon geographic expansion. “As we’re globally active as a business we can balance out difficulties in one market with good results in another. Last year, for example, we grew particularly strongly in the Middle and Far East.

“We’ve observed an interesting development to this end; a growing number of large companies want to produce their own retreads and require a retreading facility tailored to their own requirements for this. We’ve even noticed this phenomenon in the USA, one of the most important global markets and a region where we’re present with distribution, installation and service structures. Very large fleet operators with thousands of vehicles sometimes decide to invest in a retreading facility that only serves its own fleet.”

Only recently, Cima Impianti announced it will in future add passenger car and truck tyre retreading moulds to its portfolio; these moulds will feature tread patterns that correspond with the patterns of a particular, renowned new tyre maker. “We’ve been working on this very important product for the last two to three years. As new tyre makers have endeavoured in recent times to protect their tread designs and constructions against counterfeiters, Cima Impianti has been able to benefit from its good relationship with the new tyre industry and gain approval to use these treads in its retreading. In this way the customer is assured that he faces no quarrel with the new tyre manufacturer.”

As expected, Cima Impianti will exhibit at this May’s Autopromotec show in Bologna. “At the moment we’re implementing a number of different projects. Therefore we haven’t yet decided what we want to display at the fair. However there will definitely be a lot for us to talk about,” concludes the sales manager.