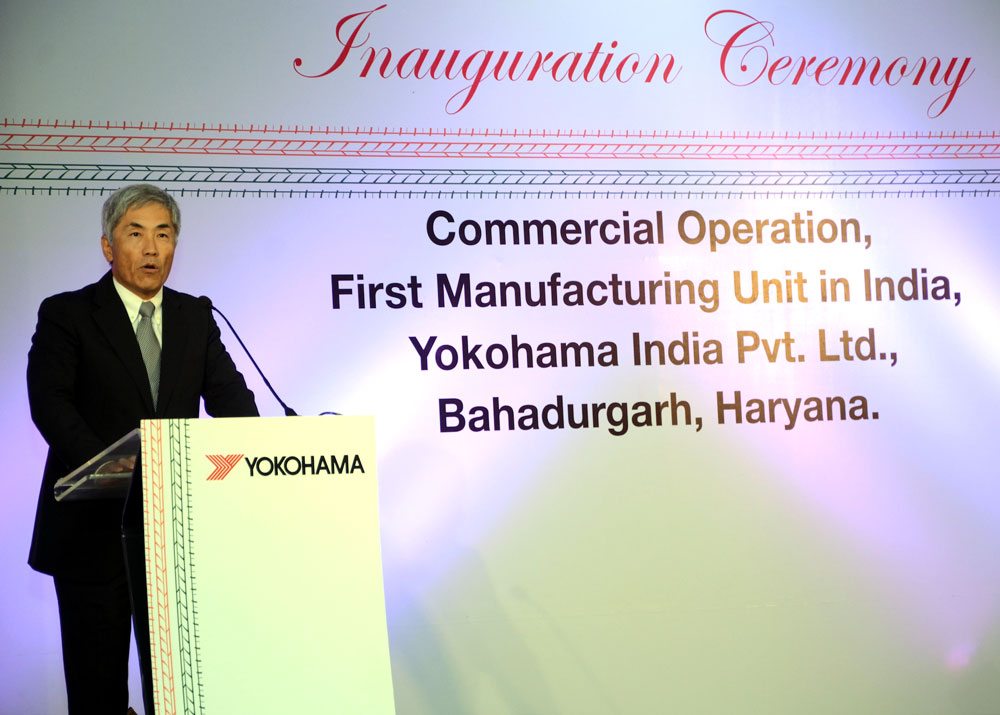 In February 2014, Yokohama India Private Limited reported the inauguration of its new factory in Bahadurgarh, with the Chief Minister of India’s Haryana State, Shri Bhupinder Singh Hooda, doing the honours. However it seems two official openings are better than one, and Yokohama Rubber shares today that an official opening ceremony was held at the plant on 1 November. And a further ceremony – the second or third, depending on who you ask – was held the following day for tyre dealers from around India.

The ceremony held on 1 November was attended by about 200 guests, including Japan’s ambassador to India, Takeshi Yagi, and representatives from vehicle manufacturers. Yokohama Rubber representatives included president and representative director Hikomitsu Noji and corporate officer Osamu Mikami, head of the overseas sales and marketing division for Yokohama’s tyre business.

Addressing guests at the ceremony, Yokohama president Noji said, “Anticipating considerable growth in demand for automobile tyres in India, our company decided to construct a tyre plant on this site back in 2012. It is with great pleasure that I join you here today for the official opening of this plant nearly two years later. I would like to express our deepest appreciation to the government of Haryana, to the HSIIDC, and to all the parties who made this plant and this day possible. Going forward, all of us at Yokohama Rubber look forward to supplying the highest quality tyres manufactured at this plant to drivers throughout India and are confident that our efforts here will contribute to the further development of Bahadurgarh, the state of Haryana, and the great nation of India.”

The plant is operated by wholly-owned subsidiary Yokohama India Pvt. Ltd., and began operations in July 2014. It was built with a total investment of ¥4.4 billion (£24.1 million) and will be able to operate at an annual production capacity of 700,000 tyres in 2015. It will produce passenger car tyres, such as the Yokohama Earth-1 and the S.drive, and these will be sold in India’s replacement tyre market.

The Bahadurgarh Industrial Estate that serves as home to the newly constructed plant is located around 40 kilometres west of Delhi, India’s largest consumption centre, and has convenient access to the Indira Gandhi International Airport at New Delhi, about an hour away by car. In addition, Yokohama expects the nearby Haryana State University of Science and Technology to provide a steady supply of high-quality employees.