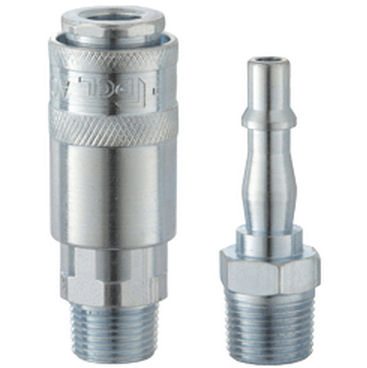 All that glitters isn’t gold – but in this case, that’s a good thing

Silver is certainly not runner-up to gold at PCL; the company reports that its famous “Made in Sheffield” couplings began the transformation from gold to silver at the start of the month for the sake of the environment. The switch to a more environmentally-friendly manufacturing process means a change of colour for the PCL couplings, however they will still be made from hardened steel to ensure extra durability.

All PCL couplings will continue to be built by hand and 100 per cent individually tested for guaranteed reliability in PCL’s factory in Sheffield. The manufacturer describes the new silver look as “sleek” and says it brings the coupling more in line with PCL’s main family branding; the only physical change to the product is the plating process – whereby the electrical plates on the couplings will be coated with Trivalent chromate to remove the associated health risks of Hexavalent chrome. The removal of Hexavalent chromates in PCL’s manufacturing process for couplings is taking place in a rolling change that began on 1 September 2014.

Although arguably the most commonly used chromate throughout most industries worldwide, Hexavalent chrome (Chrome VI) is a known carcinogen and, even though it is used in very minute quantities in chromates, its use is being eliminated by companies throughout the world. The European Union’s End of Life Vehicles (ELV) directive and Restriction of Hazardous Substances Directive (RoHS) directive both restrict the use of Hexavalent chromates.

Trivalent chromate (Chrome III) are Hexavalent chrome (Chrome VI) free and meet the more stringent requirements of today’s international specifications and are being used more predominantly. Trivalent chromates also produce a harder, scratch-resistant coating with good corrosion resistance. PCL has already successfully introduced Trivalent chromate to other products, including tyre valve connectors and its MK3 tyre inflator, so customers purchasing the company’s couplings will benefit from their prior manufacturing expertise.

The first PCL quick release couplings and adaptors were made in the early 1940s when the company set up its factory in Sheffield, and were then patented in 1944. Today’s range has developed into a world-leading collection of couplings designed for a variety of markets, from Airflow and Vertex to the common industry interchanges and safety couplings.

PCL says this latest manufacturing process advance underlines its reputation as an environmentally-responsible company committed to UK manufacturing. The company states its pride in displaying the city’s prestigious mark of quality and excellence on its “Made in Sheffield” products, which promise to meet the requirements of relevant quality standards and stringent European and other market approvals.