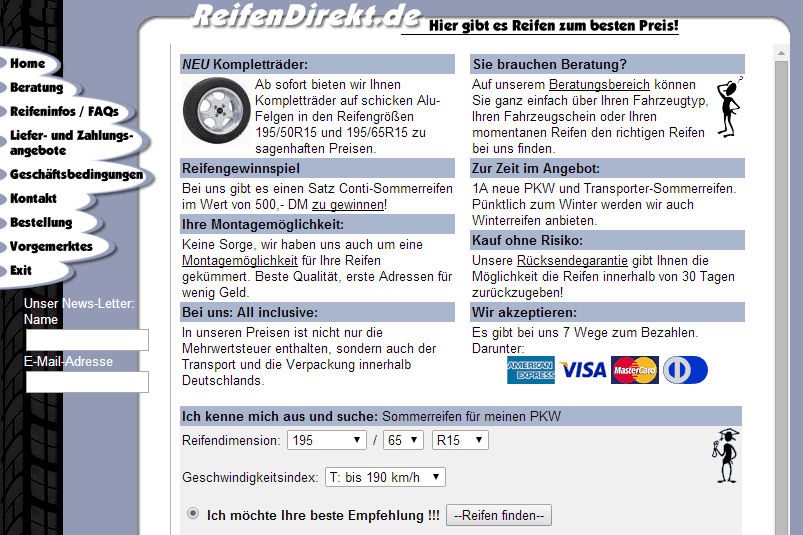 This month, online tyre dealer Delticom celebrates 15 years in the business. The company was set up in Germany on 2 July 1999 by former Continental sales managers Rainer Binder and Dr. Andreas Prüfer, together with internet expert Timon Samusch. Initial capital invested in the company was DM 60,000 (approximately €30,000 using the changeover rate), and turnover in the second half of 1999 amounted to DM 1.8 million. On 15 January 2000, the four-employee company (at the end of 2013 Delticom had 254 employees) launched its first B2C portal, the German-market reifendirekt.de site, and the following May it entered the B2B segment with autoreifenonline.de. At its absolute peak, Delticom received 600 orders a day in 2000.

Expansion into international markets got under way early on and initially involved other German-speaking countries; reifendirekt.at was set up for Austrian B2C customers in September 2000 and Swiss-market site reifendirekt went live in March 2001. In August that year, Delticom crossed the channel and launched mytyres.co.uk and mytyres.net in the UK. Today the company operates 137 online shops in 42 countries. Delticom’s turnover exceeded the €500 million mark for the first time ever in 2013.

“We thank our customers for 15 years of trusting in Delticom,” said co-founder and board member Andreas Prüfer. “All colleagues and employees work daily on making the internet tyre purchase experience as comfortable, time and money saving as possible.”