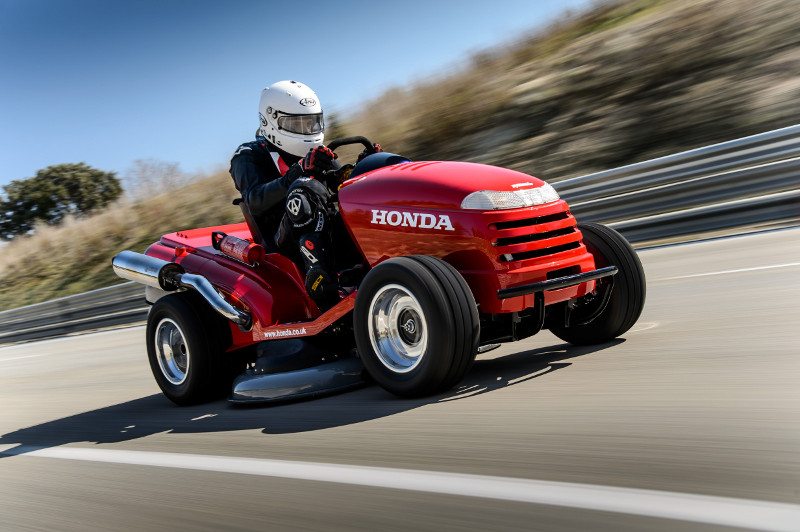 Honda (UK)’s Mean Mower is the fastest in the world

The successful Guinness World Records attempt took place under the watchful eye of a Guinness World Records Adjudicator at the IDIADA Proving Ground, in Tarragona, Spain, on Saturday, 8 March 2014. Behind the wheel was Piers Ward of BBC Top Gear Magazine, who had previously achieved a fastest speed on Mean Mower of 87mph. At around 4.20pm CET on the 2000km North Straight at IDIADA, Piers eclipsed the previous record of 87.83mph, set in May 2010.

The speed was measured through a 100 metre speed trap, overseen by official timers, Timing Solutions Limited. To meet Guinness World Records regulations the mower had to record the same run, in both directions, within an hour – with the average speed taken of these two runs. Additionally, to qualify for the record it needed to cut grass and to look like a lawnmower; both of which it did successfully. With all of these criteria met, the Guinness World Records Adjudicator officially declared the success of the record attempt just before 6pm CET on Saturday, 8 March.

The idea for Mean Mower was to demonstrate Honda’s sprit of innovation, its motor sport heritage, and that it makes more than just cars. Mean Mower was designed and built in the UK by Honda (UK)’s British Touring Car Championship (BTCC) partner, Team Dynamics.  The team re-engineered a Honda HF2620 Lawn Tractor from the ground-up, adding an all-new fabricated chassis, custom-made from 4130 chromoly, to provide a strong, safe but very light platform. A 1000cc engine from a Honda VTR Firestorm was used, along with a bespoke suspension and wheels from an ATV.

Every effort was made to retain as much of the look of the original mower as possible. The cutter deck was custom-made in fibre-glass, to reduce weight, while, in a stroke of pure genius, the grass bag provides a happy home for the fuel tank, a high capacity oil cooler and a secondary water cooling radiator.

The ability to still cut grass was also a key element of the brief, and the super-fast mower still can, admirably, thanks to two electric motors on the cutter deck, spinning 3mm steel cutting cable at an incredible 4000rpm.

Safety was paramount to the project, so every effort was made to make the mower stable and secure. To achieve optimum balance ATV wheels were used – ideal because ATV racing is held on rough off-road tracks. Super-soft tyres ensure optimum grip and excellent handling on the tarmac. Additionally, every effort was made to use Honda parts, where possible, including brakes and several motorcycle components. Almost everything else was custom-made by Team Dynamics and its partners.

You can see the video of Mean Mower in action at: http://youtu.be/DFo7ztlMlmg