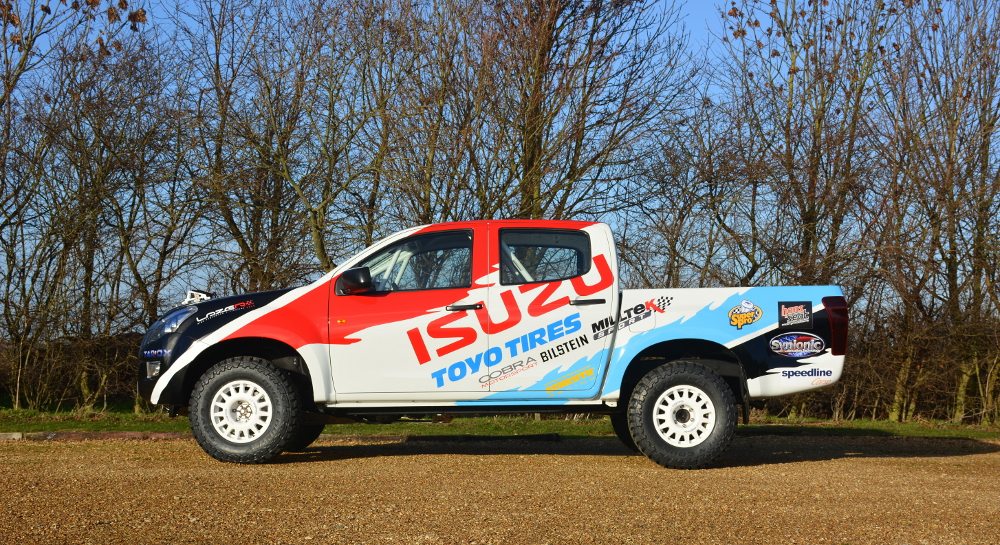 Toyo Tires will be the technical partner to Isuzu UK for the pick-up truck manufacturer’s team in the Britpart MSA British Cross Country Championship (BCCC) 2014. The deal means the Japanese manufacturer’s motorsport team will supply the Isuzu UK rally team with tyres all season, as well as advising on set-up and usage.

Toyo says that Isuzu UK has taken an innovative step in the BCCC by preparing a purpose-built pick-up truck, based closely on the production specification of their best-selling road-going D-max model. The championship regulations allow for a little ingenuity in the truck’s build specification, so in addition to the essential safety items like a custom-built roll cage, electronic fire system and custom Cobra FIA-approved race seats and harnesses, the Rally D-Max also sports custom Bilstein suspension, bespoke alloy fabrication by Forge Motorsport and a stainless steel race exhaust by Milltek. Driven by seasoned professional Jason Sharpe, a man that can count both race, rally and tuition titles to his name, the season ahead already looks very promising indeed.

Toyo will supply a season’s worth of 245/75/16s Open Country All Terrain tyres to fit the custom Speedline Wheels. Despite being one of Toyo’s most popular road-legal fitments, these tyres are also MSA ‘Blue Book’ approved, making them a good choice for the tough rally stages of the BCCC, which takes place in demanding countryside conditions in Wales and Scotland.

Isuzu also plans to campaign other one-off BRTDA and overseas rounds throughout 2014, and for these occasions, Toyo will be supplying Open Country Mud Terrain rubber.

Commenting on the sponsorship package, Toyo UK’s technical and motorsport director Alan Meaker said: “We’re delighted to be part of Isuzu’s ‘blue-chip’ technical team. The D-Max has been prepared to an exceptionally high standard, and it’s clear that Isuzu UK are looking to score points from the truck’s very first outing. We’re looking forward to working closely with Jason and the team to get the perfect set-up and hopefully, we will see some favourable results early on as the season unfolds.”