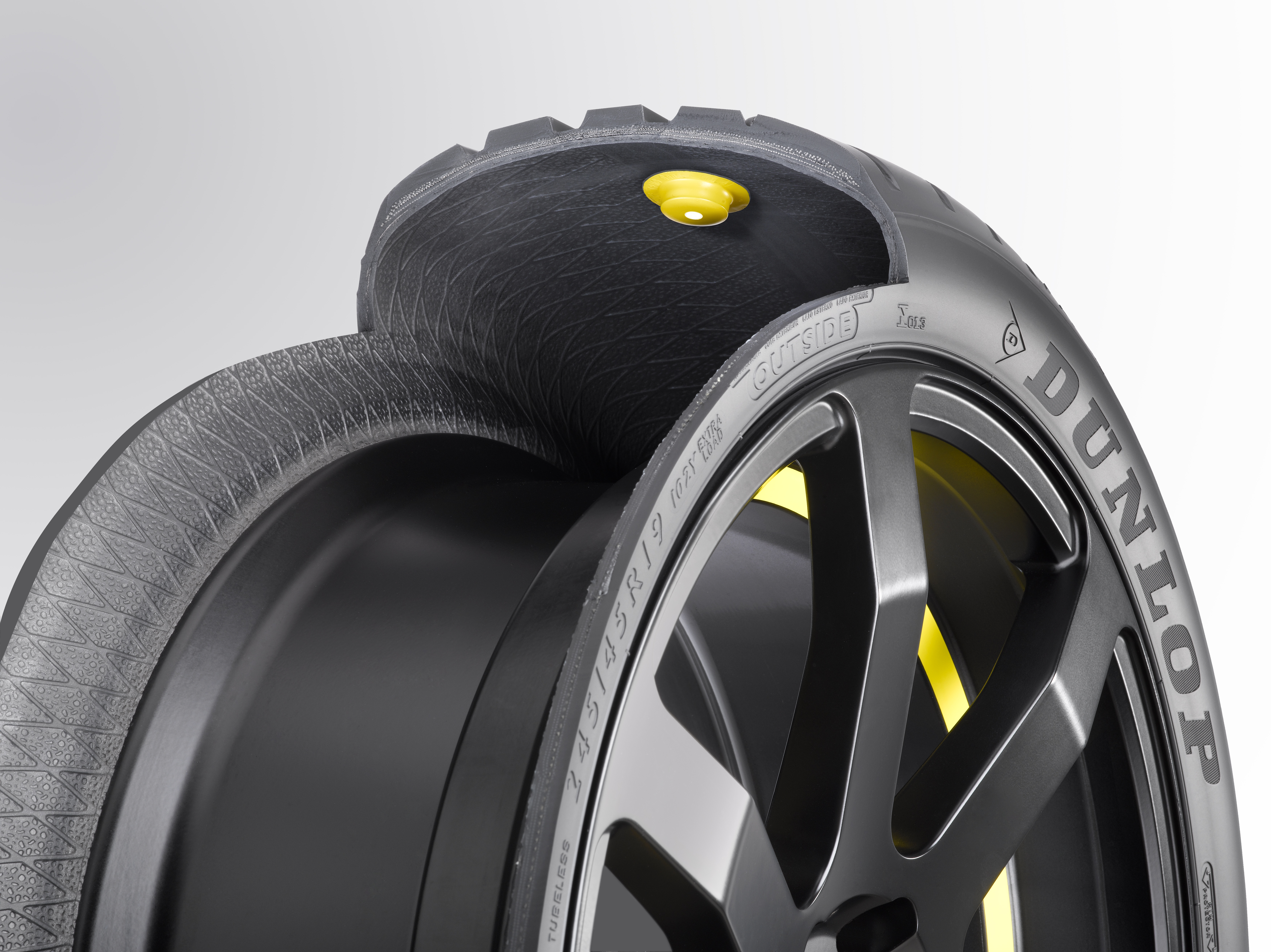 This week Goodyear Dunlop Tires Europe is offering the industry a glimpse at the future of tyre technology, exhibiting its “chip-in-tyre” sensor technology at the 2014 Geneva Motor Show. As you would expect the technology is designed to enhance the cornering, braking and stability performance of the car. What’s new is the extent to which the Dunlop chip-in-tyre offers direct link between its microchip, the car’s on-board computer and even the increasingly common infotainment screen.

The Goodyear Dunlop technology is built on a piezo-powered microchip attached to the inside of the Dunlop branded tyre. This technology doesn’t need charging as it derives its power from the deformation of the tyre as it revolves on the road. Of course the power capture technology used won’t literally last forever, but without a traditional battery the life of the chip so greatly exceed the life of the tyre, making it effectively battery-less.

Once powered, the system sends information on tyre pressure, temperature and crucially product identification details to the vehicle’s computer. It then uses this information in connection with the car’s central computer system to automatically refine the vehicle’s longitudinal and lateral control algorithms, to deliver an improved driving performance. This means the tyre could “tell” the ABS to adapt its on/off pattern to a variation that is better suited to the model and even present state of the tyre. Reduced stopping distances, improved cornering response, improved yaw stability and optimized stability control systems are all expected as a result.

“Today’s advanced vehicle control systems can greatly benefit from tyre specific information”, says Marc Engel, Senior Engineer at Goodyear Dunlop. “We have always understood that when we were able to gather this information, we could deliver new levels of driving performance to the car. Today we are showcasing a first concrete step in that direction as we begin to translate the wealth of information received by the tire back to improving and enhancing the overall driving experience – it is a major step forward.”

By tapping the data from the tyre directly into the system, the new technology helps the car improve its overall performance, including reduced stopping distances when the ABS system kicks in and improved stability delivered by more informed Electronic Stability Control (ESC) system.

“Tyre properties change significantly and tre type, inflation and temperature play a major role”, Engel continues. “If a vehicle knows those dynamic properties, its control systems can take them into account and deliver an improved overall performance.”

With this new technology the chip is cured/glued on the inner side of the tyre. The fact that it is not on the rim means tyre specific information can be embedded on the chip. The placement inside the tyre also means the chip is not liable to be damaged during the tyre mounting process. When consumers change their tyres to new ones with embedded chips, they will be able to continue to benefit from the new system.

The company has fitted the new system to its Dunlop SportMaxx RT tyres and is said to be testing the system for market implementation. There is even talk of a leading OEM partnering in this development work, but company representatives were reticent about letting too much of this out. No specific market launched date has yet been released.

The sensor system itself was developed with Huf, which manufacturers mechanical and electrical locking systems, TPMS and telematic systems for the automotive industry worldwide.

The announcement follows on from earlier RFID projects in motorsport and test tyre production.