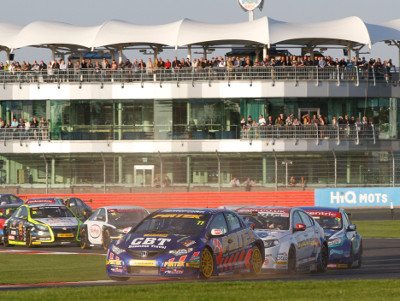 At the end of the Silverstone meeting there are five drivers in contention for the 2013 Dunlop MSA British Touring Car Championship. While Andrew Jordan is in command after extending his advantage, two wins for Jason Plato and another for reigning champion Gordon Shedden kept their respective title hopes alive. Two other former champions in Matt Neal and Colin Turkington are also in contention in the final three races of the season at Brands Hatch in two weeks’ time.

MG KX Momentum Racing produced its fourth front row lockout of 2013 during qualifying on Saturday and duly converted that into a one-two finish in the opening race. Plato took a lights-to-flag victory after thwarting an early attack from his young team-mate Sam Tordoff. From ninth on the grid Matt Neal produced a fantastic drive to complete the podium, although the eBay Motors BMW of Colin Turkington crossed the line side-by-side with the Honda, and missed out on third by just 0.008s.

Plato had to work much harder for his second victory of the day when an enthralling battle with Jordan ensued. After Jordan made his way by Tordoff shortly before mid-distance he quickly hauled in the other MG ahead of him. Jordan threw his Honda Civic down the inside of Plato on the run down to Maggotts late on and looked to have made the move stick on the exit of the tight right-hander. Both cars then ran side-by-side down to Brooklands, but Jordan held the inside line and position. No sooner had Jordan grabbed the lead, however, that Plato had dived his way back through on the inside of Woodcote Corner.

Despite coming under huge pressure for the remaining laps, Plato held on from Jordan to take his 80th BTCC race win, with the flying Airwaves Racing Ford Focus of Aron Smith following the duo home in third. Shedden produced one of his best drives of the season in race three as he surged from seventh on the grid to take the win. It was two other title contenders – eBay Motors’ Turkington and Honda Yuasa Racing’s Neal – that looked set to benefit initially as they ran first and second in the early laps.

Neal became embroiled in a fierce battle with MG’s Tordoff, however, which soon came to an abrupt end after the Honda slid wide exiting Brooklands. The three-time champion recovered well, but as Tordoff closed in the pair went side-by-side through Luffield and Woodcote and inevitable contact followed. Tordoff’s MG spun off the track while Neal dropped back, although the Honda driver fought back brilliantly to finish third behind Aron Smith.

Turkington’s day unravelled after contact with the Ford Focus of Mat Jackson on the penultimate lap, which sent the Ulsterman out of the race and seriously dented his title chances in the process.

The championship chase is still on, however, with Jordan holding a 34-point advantage with 67 still available going into the final rounds at Brands Hatch. If the 24-year-old is to secure his maiden BTCC title then he’ll have to see off the attentions of four former champions, and with seven titles between them you can be sure that Neal, Shedden, Turkington and Plato will be fighting until the finish.

Lea Wood scored another hat-trick of wins in the Jack Sears Trophy as the Vauxhall Vectra driver produced impressive displays in each of the three contests.

Championship leader Andrew Jordan said: “Coming into the weekend I had it in my head that if I left with a 15 point buffer that’d be great, and I certainly didn’t think there’d be any way we’d extend the lead so that’s a nice surprise. I’m keeping my feet on the ground – I could always get put into the gravel at Paddock Hill Bend in race one and then there’d be everything to play for again, so there’s a long way to go. I’d definitely prefer to be in my position than any of the guys behind me – I’m still going to be flat out for the last three.”

Second placed Matt Neal said: “It’s great for the team – and to see Gordon up there in the third race after a tough start to the day. We didn’t expect to get a double podium at the beginning of the weekend – and it’s fantastic to be back up to second in the championship. Plato is still in it, Turkington is still in it, and I’m only a point ahead of Flash so the race is really on now.”

Third placed Gordon Shedden said: “I’m not quite sure where that race three win came from – the guys have worked so hard all day and the car came alive. The Dunlop soft tyre made a big difference; I could brake a lot later on it. As long as he doesn’t do anything daft, Andrew is in a really strong position. That said, this is touring car racing and anything can happen – I certainly didn’t expect to win a race around Silverstone today so who knows what will happen at Brands. It’s been a great day for the team, to get both cars on the podium at the end is a nice payback to the boys at Honda.”

Title contender Colin Turkington said: “It’s really frustrating when someone who’s not in the championship battle effectively ends mine. It would have been a bit easier to accept if I’d been scrapping with the front four guys and there had been a coming together and I come off worse, but Mat had nothing to gain from the move and that’s what is hard to take. I can understand that he didn’t mean it, but a bit more sympathy about how delicate my championship situation is would have been good. Although I can mathematically do it the car won’t be significantly quicker than everybody else for me to be able to overturn that many points. I’ll be fighting back at Brands Hatch, but realistically now my aim is the top three.”

Title contender Jason Plato said: “Of all the 80 victories I’ve had – that (race two) was one of the most enjoyable. It’s been a good weekend. What’s important for me is to win and it’s maximum attack. I’m going to Brands Hatch with one thing in mind – while there are guys in front of me worrying about the championship, I’m going there to win, so they’d better get out of my way!”