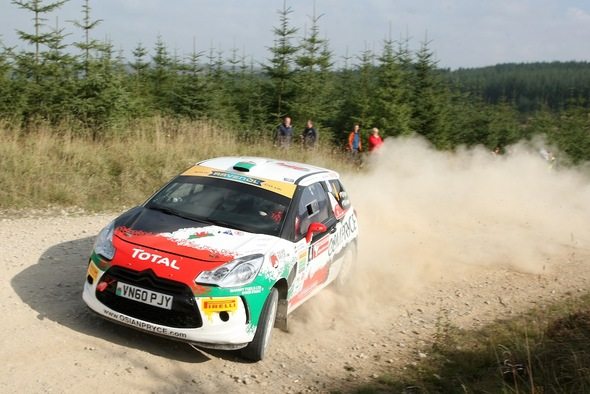 Osian Pryce won the Trackrod Yorkshire Rally, round five of the British Rally Championship, following a three-way battle that took the event to the final stage. Pirelli, on whose tyres the BRC is competed, said that the rally matched last year’s corresponding event, which staged one of the championship’s closest finishes, for excitement. The manufacturer’s supported Pirelli Star Driver Mark Donelly helped make the event for Pirelli, driving a mature rally to bring his Pirelli-backed Citroen DS3 R3T home in fifth. Meanwhile championship leader Jukka Korhonen – a former Pirelli Star Driver himself – looks likely to clinch the title in the Dorset and Hampshire forests, where the six-round series concludes with Rallye Sunseeker International (18-19 October).

Forming the penultimate round of this year’s British Rally Championship, the Yorkshire Rally marked a return to gravel for the BRC crews as they took full advantage of Pirelli’s highly successful Scorpion gravel tyres to combat the fast, flowing roads that characterised the two-day event.

Championship leader Jukka Korhonen set the pace on day one with a blinding time on Friday evening’s Staindale stage, which was held in the dark. The lead didn’t last long, however, as Pryce responded by going quickest through stage two to snatch the overnight lead.

Saturday’s stages were to prove just as competitive with Korhonen, Pryce, Fisher and Welshman Tom Cave all grappling for the top spot. Only a handful of seconds separated the crews before they took on the longest stage of the rally: the 15-mile Langdale test, which Pryce went on to win.

With less than eight seconds separating Korhonen, Fisher and Pryce going into the final test, it was all to play for. However, the pressure proved too much for Korhonen as he stalled on the finish line and Pryce went onto claim his second consecutive BRC victory. Korhonen was forced to settle for second, Fisher took third and Cave finished fourth.

Speaking at the finish, rally winner Pryce – who also took part in last year’s Pirelli Star Driver shootout – commented: “This season is just getting better and better. We’ve proved we can win on both gravel and asphalt so now we need to secure the hat-trick by winning the Sunseeker next!”

After a sterling performance at his home event in Ulster last month Pirelli Star Driver Donnelly kept his nose clean over the weekend to bring his Citroen home in a credible fifth place. “It’s been an okay rally for us,” admitted 23-year-old Donnelly who hails from Omagh. “The pace at the front has been really fast so we’ve struggled to match the pace of those guys but we’ve done a good job and I was pleased with how the last few stages went.”

Alex Parpottas was awarded the fifth Pirelli Star Driver nomination of the year after impressing the judges with his drive in the Ford Fiesta R2, which he nursed home through the rally’s closing stages after the car’s cooler pipe split.

Pirelli UK operations manager Matthew Corby, summed up the weekend: “Last year’s Yorkshire Rally was one of the closest finishes in BRC history and this year’s event proved just as exciting with the battle for the win going down to the very last stage. The boys at the front were very quick but our Pirelli Star Driver Mark Donnelly was a model of consistency over the weekend. He did a brilliant job of just driving his own rally, looking after both the car and tyres. Jukka Korhonen now looks set to clinch the series title at the Sunseeker season-closer and it’s fantastic to see how much our former Pirelli Star Driver has progressed in his career over the past 24 months. Hopefully Mark can follow in Jukka’s footsteps and continue to take steps forward in his rally career after the support and guidance he has received from Pirelli this season.”