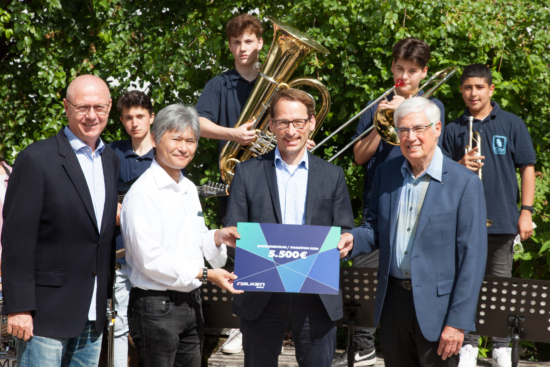 Keiichi Miyamoto, CFO of Falken Tyre Europe (front, centre-left) presents the donation, which will promote the wellbeing and musical education of children and young people in Offenbach, Germany, the brand’s European home

The initiative, represented by founder and managing director Dirk Lünzer, will support these two Offenbach organisations that focus on the wellbeing and musical education of children and young people. With the relaxation of the rules on social distancing, Dirk Lünzer and Keiichi Miyamoto, CFO of Falken Tyre Europe, were able to present the donation to Rainer Klett, chairman of the advisory board of the Mathildenschule, in person and in the presence of teachers and pupils at the Mathildenschule.

In addition to Falken’s contribution, von Herzen zu Herzen gemeinnützige also donated 3,000 euros to the Förderverein der Mathildenschule, taking its total to 5,500 euros. “Many families rely on external and professional support, not just during the pandemic,” says Lünzer. “I am very happy about the generous donation from Falken, which is of huge importance to Offenbach. This is the third time that Falken has supported us, demonstrating once again that this global company is prepared to take responsibility in the community right here in Offenbach.”

“Last year, we decided against giving Christmas gifts to our European customers and instead again donated an equivalent amount to projects supporting children and young people,” said Keiichi Miyamoto at the presentation ceremony for the donation. “During the pandemic in particular, the needs of young people have often been overlooked, and they – just like everyone else – have faced some very challenging times. We are all the more pleased if our donation has been able to put a smile on the faces of those affected and make their lives a little easier.”

Goodyear and TyreOps initiate inspection and jobs connection across Europe