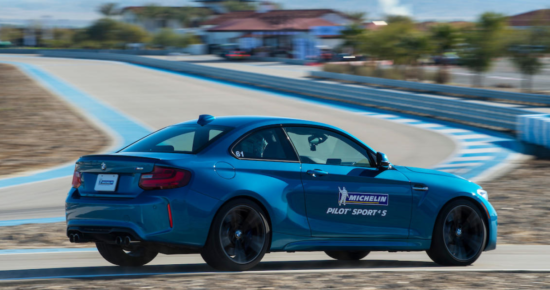 The relationship between Michelin and BMW dates back 35 years, and at present the tyre maker supplies to no less than nine ‘M’ models – the M2, M3, M4, M5, M8, X3 M, X4 M, X5 M and X6 M. Most recently, Michelin tailored two of its high performance tyre lines for original equipment fitment on the BMW M3 and M4.

“Introduced three-and-a-half decades ago, the original BMW M3 was the first of a line of cars that has since gained icon status. Like all the generations of the model that have followed in its footsteps, it was fitted with Michelin tyres. Today, BMW Group has once again put its confidence in Michelin to equip the new BMW M3 Saloon and BMW M4 Coupé, the performance and agility of which will delight fans of sports cars that can both serve as the family car and be taken onto the race-track,” says Ludovic Leguem, brands, products and technologies communication manager for BMW Group France.

Engineers from the two companies collaborated to produce tailor-developed tires for road and circuit use, work denoted by the star symbol on the tyre’s sidewalls. Testing during the development process took place on public roads and also at circuits such as the Nürburgring, as well as on BMW and Michelin’s own Miramas and Ladoux test tracks in France and at the IDIADA proving grounds in Spain.

“The ambitious results targeted by BMW M’s engineers for the Michelin Pilot Sport 4S and MIichelin Pilot Sport Cup2* Connect inspired us to channel the best of our technology into these two specific tyres,” says Pierre Chaput, the development engineer behind these Michelin solutions for the new BMW M3 saloon and BMW M4 coupé. “Thanks to their innovative tread design, they both push the envelope in the terms of the grip they deliver, while their construction ensures the high standard of precision and sporting performance that are trademarks of the BMW M range.”

Two tyres for two types of use

Acclaimed for its performance on ordinary roads and circuits alike, the Michelin Pilot Sport 4S* is a carefully balanced package that combines outstanding grip with control, driving enjoyment and long life. The technology employed for its tread band – which particularly benefits the performance of the front tyres – features a combination of four compounds selected to achieve optimal grip on dry roads, precise handling and hallmark roadholding in the wet.

The Michelin Pilot Sport Cup 2 Connect* is a racing tyre approved for road use that will “enchant drivers looking for genuine excitement and satisfaction behind the wheel.” It is the first fully-connectable production tyre and can be used in conjunction with Michelin Track Connect, an application that provides tyre pressure and temperature recommendations to ensure optimal handing and a unique experience, along with faster lap times, lower wear and greater consistency when used on a racetrack. BMW M is the first manufacturer to have specified Michelin Track Connect-compatible tyres as original equipment.

The Pilot Sport Cup 2 Connect* features a specific compound that incorporates functionalised elastomers for an even more consistent blend. Michelin says the “result is faster cornering and outstanding stability at high speeds, with no detriment to either rolling resistance or grip in the wet.”