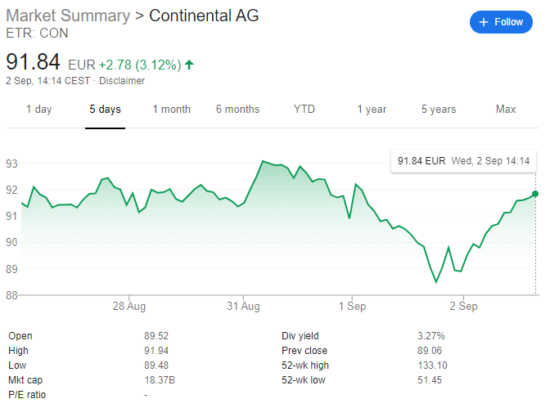 Financial analysts are reacting positively to the far-reaching restructuring measures announced by Continental AG yesterday that could cost up to 22 per cent of the 59,000 jobs in Germany alone.

JP Morgan, for example, writes that the Conti’s plans were said to be “another step in the right direction”, with the analysts adding that the supplier: “bundles parts of production and development at locations with low costs. Unprofitable activities should be closed or sold. In addition, the number of hours worked should be reduced”. As a result, the rating for Continental is left at “underweight” with a target price of 64 euros.

Goldman Sachs also thinks “that the higher savings target is definitely positive in the long term”, even if the situation for Continental remains “challenging in the short term”. As a result, they left their rating at “neutral”, with a target price of 86 euros.

Details of the Continental’s reorganisation programme can be found here.

Cooper appoints Fintyre as an exclusive distributor in Italy