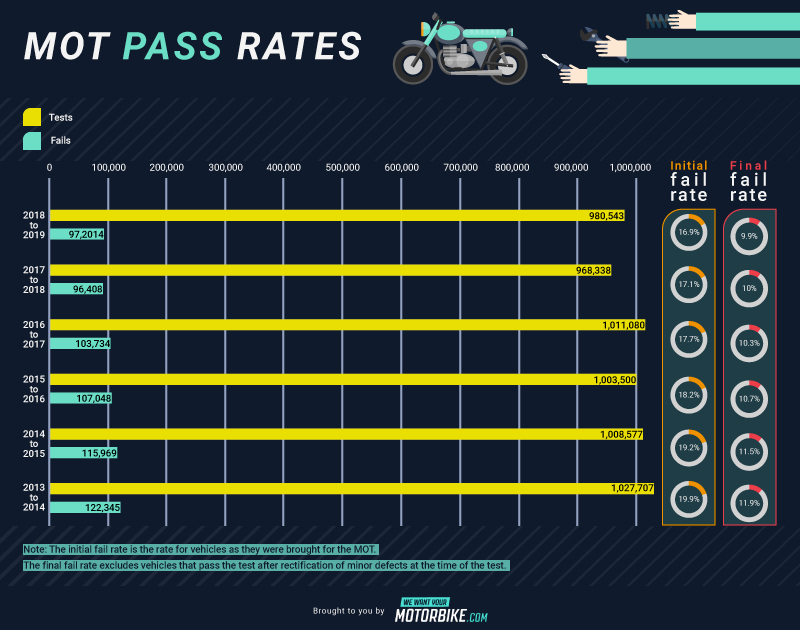 Bike MOT failure rates have decreased over the past five years

The love and attention some motorcycle riders show their machines borders on obsessive, and this dedication to keeping bikes in top working order is reflected in MOT pass rates. Only 16.9 per cent of bikes fail their initial MOT tests, compared to 33.6 per cent of cars and 42.2 per cent of goods vehicles. But when motorcycles do fail, it’s often for problems that could have easily been rectified beforehand. Tyres are the leading ‘dangerous’ defect.

The team at WeWantYourMotorbike has delved into the UK Government’s MOT testing data to find out the most common motorbike failures and the most dangerous defects.

Lamps and reflectors are the main culprit, accounting for 40.21 per cent of failures. Brakes occupy second place (16.83 per cent), followed by structure and attachments (10.77 per cent) and tyres (9.95 per cent).

Around five per cent of motorcycles – 4.71 per cent, to be precise – fail their MOT due to a dangerous defect, and when it comes to failures deemed dangerous, tyres top the list. The figures indicate that 43.18 per cent of MOT failures deemed dangerous were tyre related. Problems include insufficient tread depth – 1mm is the legal limit in the UK – as well as the presence of bulges, cuts or lumps. The next most common ‘dangerous’ failure was brakes (26.88 per cent), followed by structure and attachments (12.02 per cent), lamps and reflectors (6.02 per cent) and steering (5.96 per cent).

The number of motorcycles failing their MOT has steadily declined over the past five years, from 11.9 per cent in 2013/14 to 9.9 per cent today. This trend is encouraging, especially as stricter rules were put in place for MOTs in 2018.