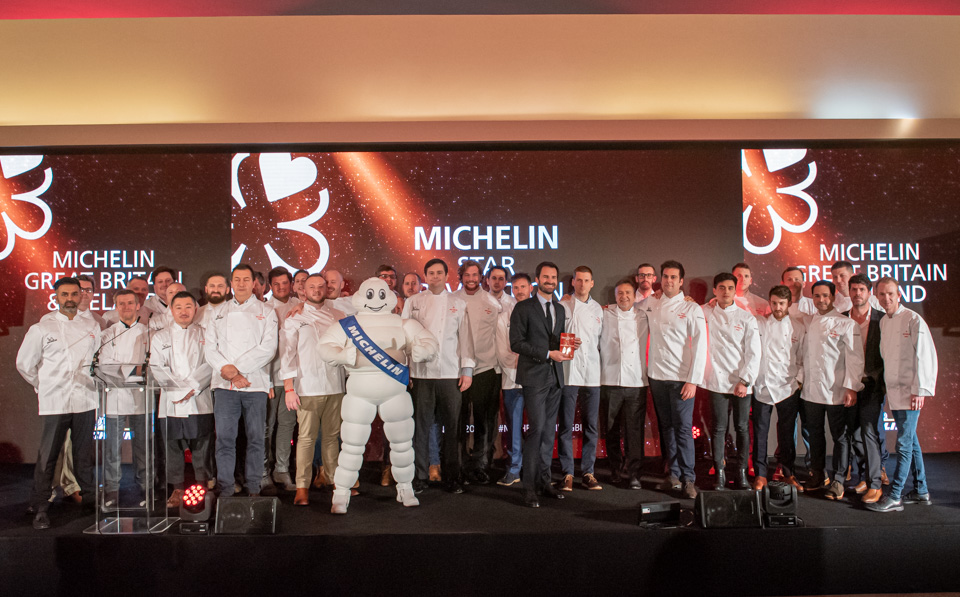 187 Michelin-Starred Restaurants are featured for 2020

The Michelin Great Britain & Ireland Stars for 2020 was unveiled yesterday at a special launch event at The Hurlingham Club in Fulham, London. One hundred and eighty-seven Michelin-Starred Restaurants are featured for 2020, including one new Three Star, four new Two Stars and 23 new One Stars.

For Michelin, this year’s highlight is the promotion of Sketch (The Lecture Room & Library) in Mayfair (Johannes Nuding) from Two to Three Michelin Stars – its highest accolade.

“Despite the obvious challenges being faced by the industry here in the UK, we are thrilled that this has been such a stellar year, and we have seen many first ventures opening and rapidly rising to success,” says Gwendal Poullennec, international director of the Michelin guides.

“With three Michelin Stars, Sketch joins four other restaurants at this prestigious level. This Pierre Gagnaire restaurant won its first star in 2005 and its second in 2013. Our inspectors judge the cooking here to be wonderfully complex and highly original, with each element of the meal excelling in terms of structure, composition and, above all, flavour,” adds Poullennec.

Three restaurants have been promoted from One to Two Stars: La Dame de Pic in the City of London (Anne-Sophie Pic); The Dining Room at Whatley Manor in Malmesbury (Niall Keating); and The Greenhouse in Dublin (Mikael Viljanen). Meanwhile, Aimsir in Celbridge – where Jordan Bailey focuses on foraged and preserved produce – enters the guide for the first time with Two Michelin Stars.

The Lake District is a big winner, with three restaurants gaining One Star: the sweet, intimate Old Stamp House at Ambleside; Allium at Askham Hall in Askham, which makes great use of produce from its gardens and estate; and hidden gem The Cottage in the Wood in Braithwaite.

One Star is awarded to Interlude in the Leonardslee Gardens in Lower Beeding and to Pensons in Tenbury Wells, which both focus on local and garden produce; meanwhile, Nottingham’s new One Michelin Star alchemilla really brings plant-based ingredients to the fore.

Michelin has been pleased to see an increasing number of restaurants run by couples – six of its new Stars are run by husband and wife teams. These include the picture-perfect Royal Oak pub at Whatcote; modest little Stark in Broadstairs, which seats just ten guests; The Angel in Hetton, which is now under the leadership of experienced owner Michael Wignall; and Laurie Gear’s Artichoke in Amersham.

London has a good geographical spread of new One Stars, with intimate Mãos in Shoreditch; Da Terra in the restored Town Hall Hotel in Bethnal Green; Dysart Petersham, set in a charming early1900s house in Richmond; and Japanese Endo at The Rotunda in the old BBC Building in Shepherd’s Bush.

Other city establishments include sophisticated Indian restaurant Opheem in Birmingham and stylish Mana in Manchester, which receives the city’s first Michelin Star in over 40 years.

Scotland brings home two new Stars in the form of understated Condita in Edinburgh and Isle of Eriska, which is set within an impressive baronial mansion on the island of the same name. Wales sees the charming Beach House at Oxwich awarded a Michelin Star and the trendy Muddlers Club brings a third Star to Belfast, Northern Ireland.

The Republic of Ireland also has much to celebrate, with intimate wine-bar-cum-bistro Bastion in Kinsale being promoted from a Bib Gourmand, and funky modern Variety Jones in Dublin and grand hotel dining room The Oak Room in Adare both receiving One Michelin Star.

“This is an amazing year for the Republic of Ireland, with five new Michelin Stars being awarded – two of them at Two Star level. This brings the total number of Starred restaurants in Ireland up to 18 and is just reward for the determination of young chefs who are keen to make their mark on the Irish dining scene,” says Rebecca Burr, director of the Michelin Guide Great Britain & Ireland.

Burr adds: “Running a successful restaurant is tough, and we know that. It takes long hours, dedication, teamwork and the support of those people closest to you. I congratulate all the teams and chefs who have won and retained Michelin Stars in the 2020 guide.”

Alongside the new Stars, the winners of the three Michelin Awards for 2020 have been announced:

“This selection is highly symbolic because it also marks a turning point in the enormous digitisation work launched by our teams, adds Poullennec. “Indeed, foodies around the world can now find the full selection on line, free of charge, accompanied by exclusive editorial content that is regularly enriched throughout the year.”

Fine-dining lovers, whether British, Irish or tourists who wish to enhance their stay with a first-rate culinary experience, will also be able to book certain tables online and enjoy exclusive offers.