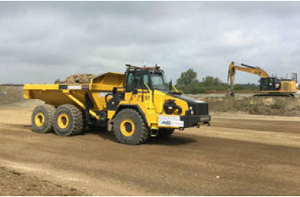 Highways England and Blackwell, the earthworks contractor, have completed work on a short trial involving an autonomous dump truck (ADT) on the A14.

The month-long project, which ended on May 1, was paid for with £150,000 from the Government’s Road Investment Strategy (RIS) innovation designation fund and took place on a section of the A14 between Cambridge and Huntingdon.

Blackwell is currently undertaking a large proportion of the earthworks on the A14 widening and improvement scheme near Cambridge.

The ADT was used to move large amounts of earth around the clock and if rolled out would help reduce the length of time roadworks are on the ground. And by being autonomous, they reduce the risk of road workers being involved in incidents on site.

A spokesman for Highways England told Commercial Fleet: “The project brought together organisations, personnel and equipment from South Africa and USA.

“The funding was used to secure use of the equipment, people, time, freight and transport costs.”

The trial put a secure wireless local area network in place to let the self-driving truck run on WiFi. This was used in conjunction with a Global Navigation Satellite System (GNSS).

Automated path planning and its execution were carried out by software running on standard computer equipment. The truck was fitted with LiDAR (Light Detection and Ranging) and radar to feed-back data to inform the self-driving software.

Cameras were also fitted to the truck for the remote operators to be able to view the area in front of the vehicle if an obstacle is detected.

It is the same technology used in the mining industry. The trucks are physically controlled by hydraulic and electronic modifications to the steering, throttle, brake, transmission and hoist systems.

The spokesman for Highways England said using automated technology means the ADTs are able to work 24 hours a day, they keep to correct speed limits and they do not need breaks (a caveat to this would be any environmental constraints around permitted working hours, noise and vibration).

Highways England said it was difficult to put a specific number on the amount of time ADTs could save verses trucks manned by an operator.

The spokesman explained: “ADTs will not move any quicker than an ADT that has an operator. However, the introduction of ADTs will increase capacity, and together with an environment that allowed extended working hours, it would therefore see the duration of activity reduced.

“There would also be a cost saving through the reduction of plant operator costs. It should be stressed once again that this is not replacing jobs, but provides much needed capacity increase for bulk earth-moving plus an opportunity to up-skill some of the existing workforce.”

Highways England said the results of the trial are currently being evaluated and reiterated that if the technology was rolled out on a wider basis, it would not mean a reduction in headcounts for those working in the industry.

The spokesman said: “The ADTs will be used to integrate with a human team and help to ensure that there is enough resource/capacity to do the work that is needed.”

PRA ‘disappointed’ by Supreme Court decision on ATMs and rates