You are here: Home1 / News2 / Company News3 / Fire Fences in red hot form to win Firestone’s Battle of the Bands 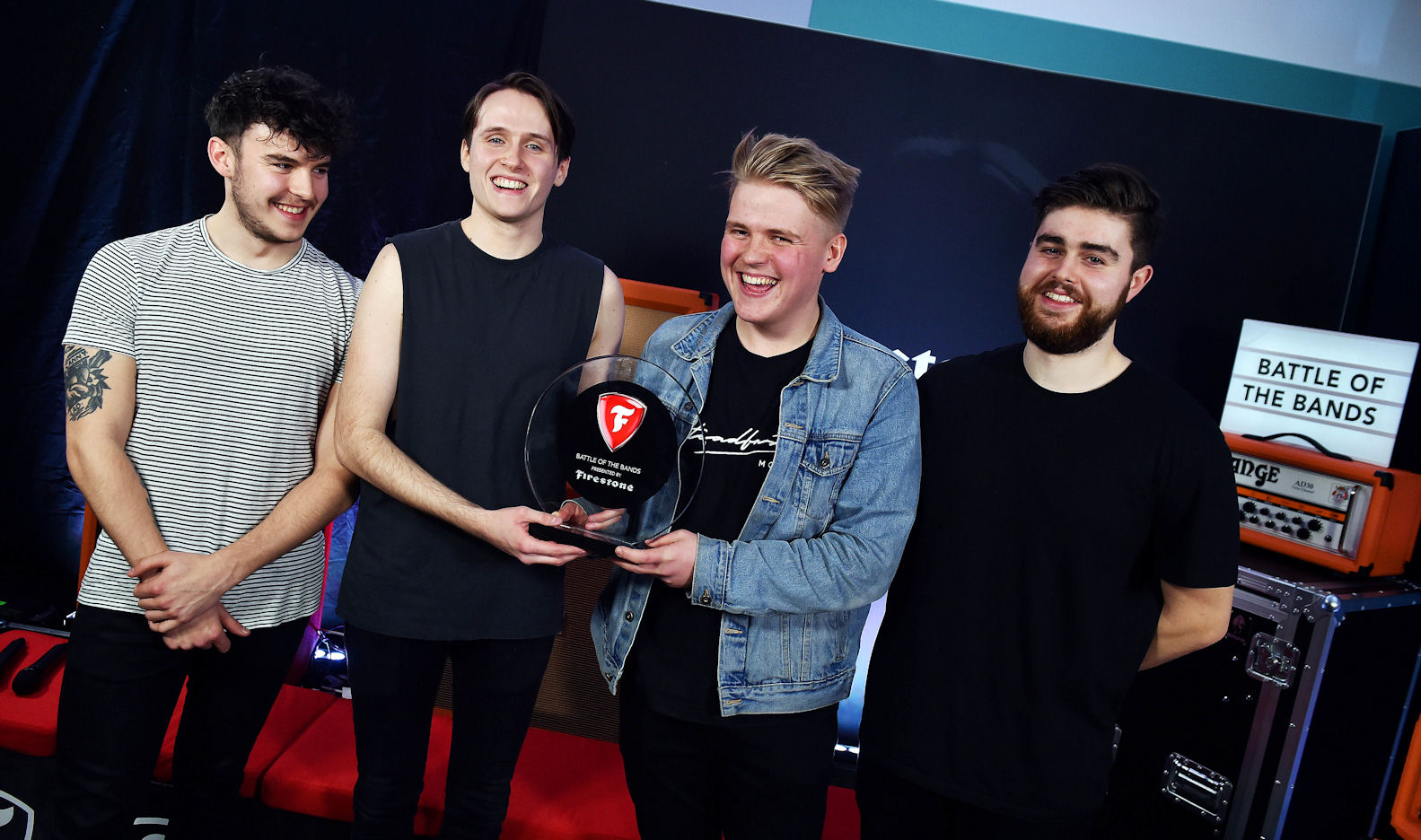 An unsigned Cardiff rock band is dreaming of a massive fan-base and headline gigs at the Millennium Stadium after beating more than 300 grassroots entries to win Firestone’s Battle of the Bands competition.

Fire Fences, formed by four Bridgend Brynteg School mates in 2013, have made their biggest breakthrough to date by triumphing in the nationwide competition, beating Worcestershire band Nuns of the Tundra and Suffolk hip-hop act EL-Emcee. The final, at the British and Irish Modern Music Institute (BIMM) in Birmingham on 14 December, was screened live on Firestone’s Facebook page to 50,000 people, with a five-strong judging panel from Orange, Professional Music Technology, BIMM, Arena Birmingham and Firestone agreeing on the winning act.

Fire Fences can now look forward to more than £2,000 worth of Orange Amplification equipment and studio time worth £1,500, along with the honour of being Firestone’s Battle of the Bands champions.

The band, comprising Cardiff University students Dylan Wictome (bass), Will Davies (lead guitar), Aaron Nicholas (vocals/guitar) and James Lee (drums) have already played in the Millennium Stadium before Wales’ autumn international with Australia and wants to go back there again one day, in front of a sell out crowd.

Aaron Nicholas said: “Every band started somewhere, so why not? To win Battle of the Bands is a huge confidence boost for us, as so many people voted for us along the way and a huge audience tuned in on Facebook to see us. We couldn’t be happier – we feel we are on people’s radars now and feel like we’re being appreciated for what we are doing which is a nice feeling.”

Abbie McCarthy from BBC Radio 1 presented the Battle of the Bands final and was fulsome in her praise for the three acts. “Competitions like these are vital for aspiring musicians,” she said. “Firestone have provided unsigned artists with a platform to perform, along with the opportunity to gain some valuable experience. Any event that helps some stars of the future to make a name for themselves can only be a great thing. After seeing the three finalists play, they should all be extremely proud of themselves.”

Fire Fences played two tracks – ‘Can’t Keep Up’ and ‘House of Cards’ – and wowed judges with their vibrant energy and toe-tapping sound which has been compared to the Arctic Monkeys.

The Cardiff University students released a new single on 15 December are another will come out in January. The plan is to release a total of six singles in 2018.

“We have been so impressed with the quality of entries and the decision was an extremely difficult one to make,” said Firestone brand manager, Stuart Attfield. “Each act offered something completely different but Fire Fences’ performance was extremely impressive and their sound was so catchy. We can’t wait to hear more from them in the future and hope that we’ve put them on a journey to the big time.

“The competition underlines why Firestone is so committed to music and promoting grass roots talent,” Attfield added. “Back in 1928, founder Harvey Firestone, brought together musicians and music-lovers on the Voice of Firestone, which gave known and unknown musicians a platform to perform on and an audience to perform for. This show was the first sponsored radio programme and quickly became the most successful entertainment broadcast of its time. Just as its tyres support drivers on the road, Firestone supports these rising talents on their road to the main stage.”

Watch Fire Fences, EL-Emcee and Nuns of the Tundra’s performances at the final here.

UK commercial vehicle manufacturing declines by a third in November