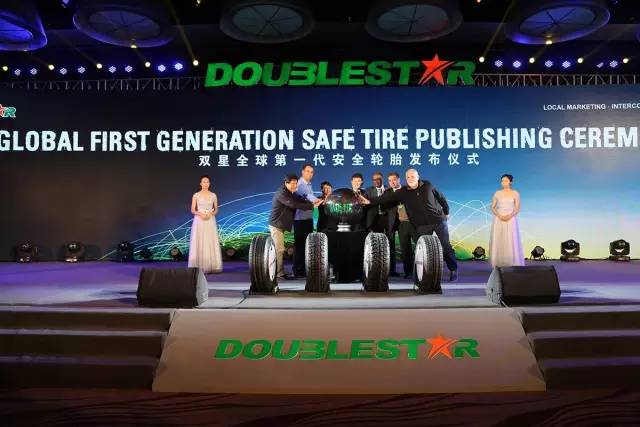 Qingdao Doublestar’s machinery division is a regular exhibitor at the RubberTech exhibition in Shanghai and the 2016 edition was no different for the factory equipment supplier. However, while the Reifen China exhibition was taking place in the neighbouring hall to RubberTech, Doublestar’s tyre manufacturing operation was hosting its “PCR Tire Industry 4.0 Intelligent Factory Completion & Safe Tire Global Strategy Conference” on 3 December in Qingdao, Shandong Province.

People present at the conference included: Deng Yali the leader of Rubber Industrial Association, Chai Yongsen – Chairman of the Board, the secretary of the party committee and other leaders of Doublestar. In addition key overseas dealers from around the world also attended.

According to the company, Deng Yali gave a speech about the current situation in the tyre industry along with an update on Doublestar’s upgrading with transition. This centred on Doublestar’s introduction of a global strategy and an industry 4.0 factory. Yali commented: “This conference is an achievement due to the development of Chinese Rubber’s innovation. Doublestar follows the change of time, so it provides more reliable products to global consumers.

Doublestar’s industry 4.0 factory features advanced information technology, digital control technology and intelligent equipment technology all of which is said to make intelligent rubber mixing, building, curing with nitrogen, classifying, examining, storing possible. In total the system investment is said to have brought with it “more than 30 kinds of upgrading”. As a result of the investments and upgrades, labour costs are said to be 60 per cent lower; while productivity has been upped three-fold.

Doublestar has won a number of key awards in 2016 including: “Top 500 Brands in Asia”, which it has won as the leading brand in China’s tyre industry for the last two years.

Doublestar is one of the oldest rubber enterprises in China and it is currently the only state-owned listed company in Shandong Province. The firm’s strategy is to: accelerate its upgrade process; invest in branding and marketing; develop market segmentation and organization. At the same time, in order to respond to the call of the Party Central Committee, the firm aims to “speed up the supply side of the pace of reform, create demand and [develop] the brand”.

Furthermore, Doublestar has been awarded for “Green Tire Intelligent Manufacturing Pilot exemplary enterprises” (something that is said to be unique in tyre industry); “National Quality Benchmarking”; and “Industrial Brand Cultivation Model Enterprise” as well as “Technological Innovation Model Enterprise”. In the past five years, Doublestar is the only one attaining all the four national honours.