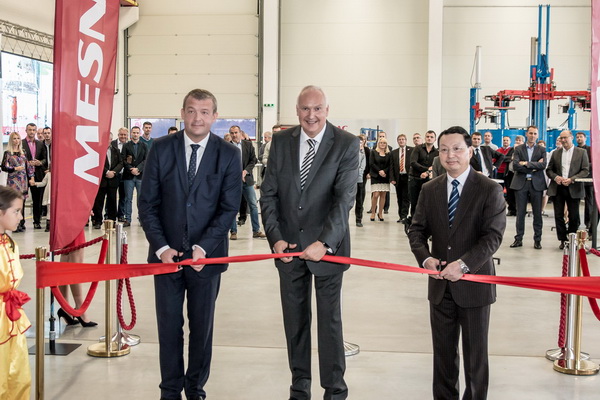 Seven years after a company bearing its name was established, the Mesnac European and Research and Technical Center (MERTC) is now up and running. The Chinese machinery manufacturer’s new European development and production facility is located in the Trencianska Tepla region of Slovakia. The site’s grand opening took place on 1 October, the anniversary of the MERTC company’s founding.

At the opening ceremony, MERTC general director Karol Vanko stated: “By opening this new plant, Mesnac will strengthen its activities in Europe, as the new facilities will improve the entire process of developing and testing new machines, providing warranty and post-warranty services and spare parts supply. It will provide a fully equipped production facility which will enable Mesnac to supply machinery that meets the performance, quality and safety standards of the European based global and regional tyre companies. The location and capability of this new facility will allow Mesnac to provide a very competitive commercial and service package to its European customers.”

The facility in Slovakia will develop and test new machines, and also produce a range of tyre builders and curing presses

Mesnac will produce its latest passenger car tyre building machines, the P-Pro, P-Pro N as well as the newest, fully-automatic machine, the P-Pro XT, in the MERTC facility. Other products that will be made in Slovakia include the T-Pro truck tyre builder and the CP and CPS hydraulic car tyre curing presses. The company states that a “number of these tyre building and curing press models have already been accepted by some of the world’s top five tyre manufacturers.”

The MERTC company was founded on 1 October 2009 and created by the engagement of senior managers and engineers from the former Matador Machinery Division (later Continental Machinery), which closed down in 2009 during the economic crisis.