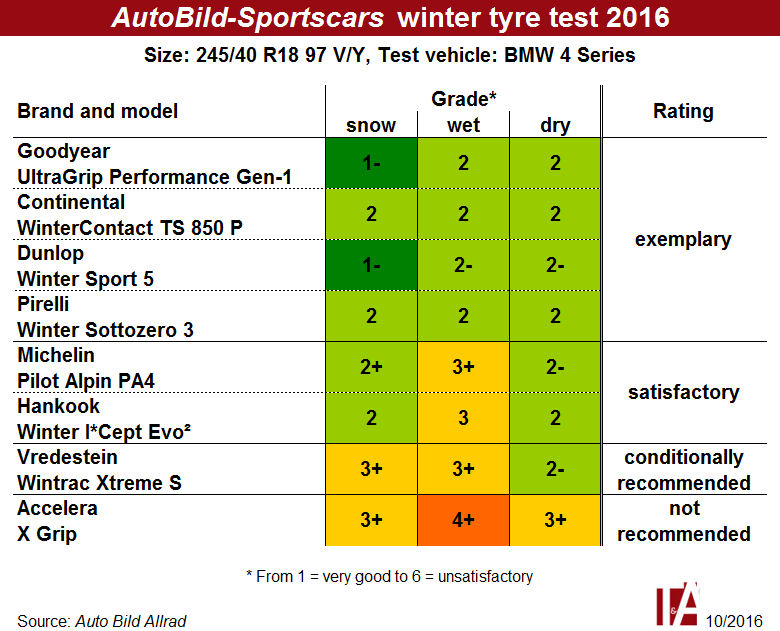 Anyone browsing the results of two of the latest Auto Bild group tyre tests would be forgiven for suspecting a copy/paste malfunction, as the ranking tables for both the Auto Bild Sportcars and Auto Bild Allrad winter tyre tests bear more than a passing resemblance to each other.

The respective evaluations of eight cold-weather products for performance cars and SUVs were conducted by experienced testers Dierck Möller und Henning Klipp, who also performed the same honours for sister magazine Auto Bild in its recent test of 50 car tyres. The wide size 245/40 R18 was selected for the Auto Bild Sportscars tyre test, and these products were fitted for a BMW 4 Series for evaluation, while the SUV tyre test involved size 255/55 R18 products and a BMW X5 test vehicle.

Victory in both tests went to Goodyear, with the UltraGrip performance gen-1 landing first place at Auto Bild Sportscars and the UltraGrip Performance SUV gen-1 gaining the same honour in the 4×4/SUV publication’s test. Second place was strictly a Continental affair, with the WinterContact TS 850 P and WinterContact TS 850 P SUV respectively occupying both runner-up positions. Dunlop rubber ranked third in both tests; these were the Winter Sport 5 for the high performance tyre test and – you guessed it – the Winter Sport 5 SUV in Auto Bild Allrad. All the above tyres gained a rating of ‘exemplary’ from Klipp and Möller. The ‘exemplary’ rating was also awarded to the holder of fourth place in the Auto Bild Sportscars test, the Pirelli Winter Sottozero 3. Tyre number four on the 4×4/SUV test table also came from the Pirelli stable, however the Scorpion Winter was only considered ‘good’ – a rating that, incidentally, wasn’t awarded to any tyre in the Auto Bild Sportscars test.

Fifth place in the performance winter tyre test went to the ‘satisfactory’ Michelin Pilot Alpin A4, while at Auto Bild Allrad this spot was occupied by the Michelin Latitude Alpin LA2, which was rated ‘good’. We return to doppelgangers in sixth place, with the Hankook Winter i*Cept Evo² (rated ‘satisfactory’) holding this position at Auto Bild Sportscars and the Hankook Winter i*Cept Evo² SUV (‘good’) the same place in the sister title’s test.

It is only when we reach seventh place that the two tests go their separate ways – the Vredestein Wintrac Xtreme S holds this spot in the high performance tyre test with a ‘conditionally recommended’ rating, while the ‘satisfactory’ Nokian WR SUV 3 was ranked seventh in the 4×4/SUV tyre test. Auto Bild Sportscars awarded its wooden spoon to the Accelera X Grip, which it declared ‘not recommended’, and last place in the Auto Bild Allrad test was reserved for the equally ‘not recommended’ Gripmax Stature M/S. In both cases the testers marked the last-placed tyres down for their limited performance in wet conditions.