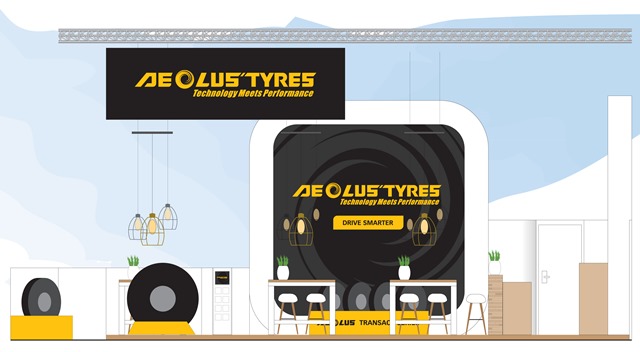 An artist’s impression of the Aeolus stand

Aeolus is set to showcase the first tyres in its new NEO series, while also presenting a range of Transace tyres for light commercial vehicles and vans at IAA 2016. Both Aeolus and Heuver have recently celebrated their 50th anniversaries and for over a decade, they have worked together to claim an important place in the European truck and trailer sector. But, partly due to the takeover of Pirelli, this position will no doubt be reinforced in the coming years.

Bertus Heuver, director at Heuver Tyrewholesale: “We worked very closely with Aeolus when developing the NEO series, which means the tyres comply with the latest European requirements. The factory is actually very flexible, and production processes and machines were modified very quickly. This means the first tyres will become available very soon. Their thorough approach also ensures that tyres are of the highest quality. Initial experiences with this NEO series have been positive, and customers are very satisfied with the technology featured in the already available first model (ATR33).

“We will also be using IAA to display tyres from our Transace series for light commercial vehicles. This part of the market is growing rapidly due to increasing internet orders and the accompany deliveries. We have now made things even easier for transport companies that have a mixed fleet of vehicles. This means they can order tyres for their whole fleet…”

Manufacturing in the spotlight for STARCO at GaLaBau