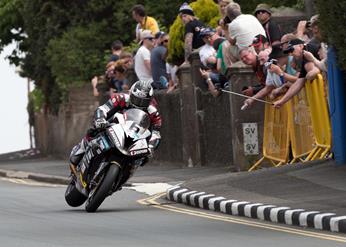 The opening race of TT race week, the RST Superbike race, saw Michael Dunlop demonstrate the performance of the Dunlop race tyre with a 133.369mph lap from a standing start. His next lap was even faster, a time of 16:58.25, and a 133.393mph average speed establishing the absolute record as he recorded his 12th TT win.

Starting the race from the #1 spot, John McGuinness finished third aboard his Honda Racing Fireblade, to secure a record-breaking 45th TT podium. Just outside the podium places was Kawasaki rider Peter Hickman, the fastest ever newcomer around the TT course, who finished a career-best fourth, with a 132.465mph lap.

David Johnson on the British-built Norton recorded a 130.872mph lap on his way to seventh. While Bruce Anstey took the Padgett’s Motorcycle Honda RCV213S to eighth place, and record his first 130mph lap, on the MotoGP replica. Daniel Hegarty took the TT Privateer’s win with 13th overall, on his Kawasaki. And Lee Johnston rounded out the top ten on a BMW.

As a result of the company’s impressive record at the most famous road race in the world, Dunlop tyres have now led the way in claiming the speed records over the past few years with John McGuinness the first to lap in 127, 128, 129, 130, and 131mph, Bruce Anstey topping 132mph for the first time in 2014 and now Michael Dunlop’s first 133mph lap.