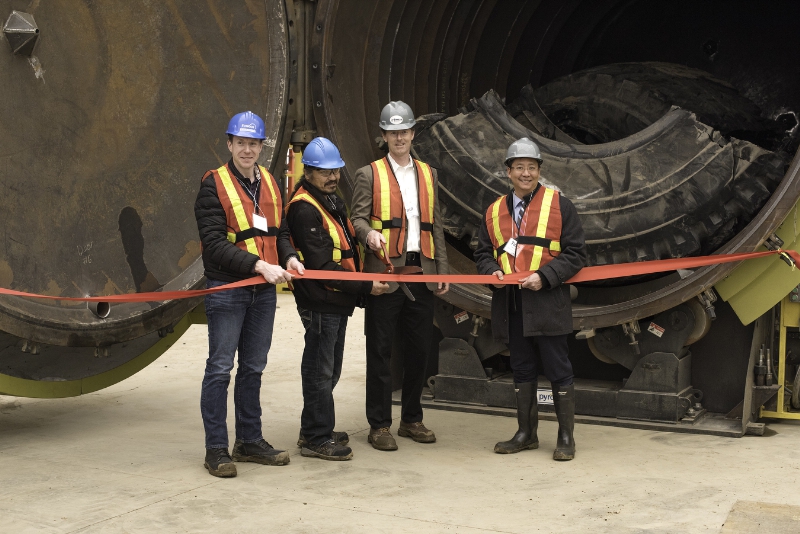 Cutting the ribbon on Titan Tire Reclamation on 29 March

Scrap tyres have accumulated in the oil sands as, until now, the size and density of mining tyres has prevented their recycling. The system Titan International has launched in Fort McMurray utilises a process originally developed by Green Carbon and is described as the product of “years of research and development.” The tyre maker partnered with Acden Paul Newton, Green Carbon and Suncor to bring the facility to the oil sands. The materials gained through recycling will be used in new products, and Titan International claims that the system applies 85 per cent of the gas it generates to heating the vessel containing the scrap tyres.

At the opening, Titan International chairman and CEO Maurice Taylor shared the company’s plans to expand the Titan Tire Reclamation operations to Chile and Australia. “This system is not just the only one of its kind in the Canadian industry, it’s the first of its kind in the world,” stated Taylor. “This venture has taken over seven years to complete from the day Titan first met with Shell Oil, but it’s been two years to get it here today with Suncor. I want to thank everyone who has worked on this project and for what they have done to make this new chapter at Titan successful.”

All four of Canada’s major mines were represented at the opening, with several mine contractors also present. Chief Allen Adam of the Athabasca Chipewyan First Nation was also in attendance, showing its support of the new technology and their partnership with Titan Tire Reclamation.

Currently 15 people work at the Fort McMurray facility, however Titan states that the workforce may expand to as many as 40.