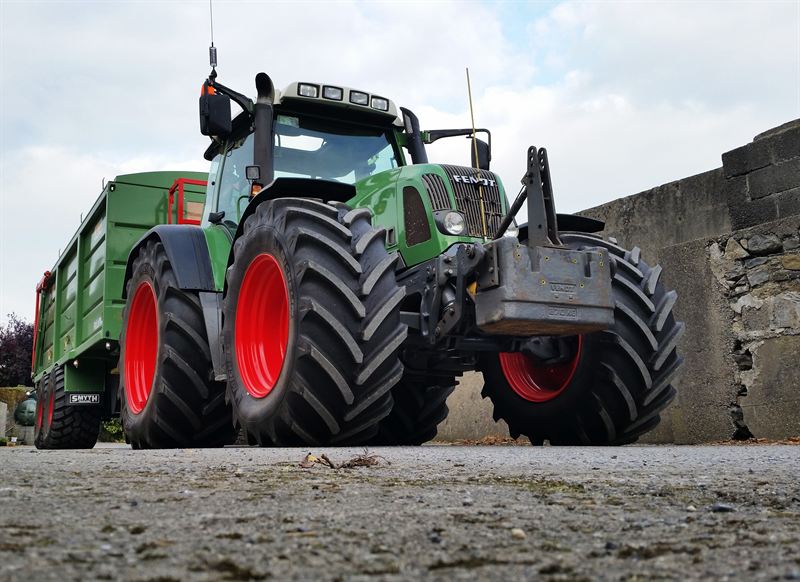 According to Neil Thornton, fitting XeoBib tyres gives the flexibility needed to ensure operation at the optimum pressure for each application

A South Kildare farmer is reportedly benefiting from minimum ground compaction after becoming the first to specify a combination of VF 710/60 R42 and VF 600/60 R30 Michelin XeoBib tyres on a Fendt Favorit 716 – believed to be the largest set of Michelin tyres ever fitted to this model of tractor in Ireland.

Neil Thornton, who farms more than 300 acres of land with his two sons David and Luke, chose the fitments following extensive research both on agricultural forums and through consultation with his local Michelin account manager, Chris Eakin. The Fendt is one of four tractors shod with Michelin tyres and will be used primarily for seasonal work, including stubble cultivation, crop establishment, ploughing, drilling, grain transportation and contract work.

“Running our tyres at the lowest recommended pressure is key to limiting soil damage and maintaining the health of our fields. Fitting XeoBib tyres gives us the flexibility we need to make sure we are running at the optimum pressure for each application, whether we’re in the field or on the road,” comments Thornton. “We’ve specified Michelin tyres as original equipment for more than a decade because they deliver excellent traction spread across a wide contact area with the ground. Michelin also seems to be one step ahead when it comes to tyres, both in terms of research and development and the technology they contain.”

As well as delivering minimum ground compaction, the XeoBib tyres feature Michelin’s patented Ultraflex Technology and very flexible (VF) sidewalls which enable the tyres to run at pressures lower than one bar, both in the field and on the road. With a 24 per cent larger footprint than a conventional tyre of the same size, pressure is distributed across a greater area, limiting rut formation and soil damage. Wheel slip is also reduced, saving the customer time and money.

The Thornton family is no stranger to Michelin tyre innovations, as in 1997 they became the first customer in Ireland to specify Michelin’s pioneering new XM108 tyres as replacements on a Ford tractor.

“The XM108s were a real eye opener for us. We used to be involved in slurry spreading, which usually took place in less than ideal weather. We couldn’t believe the difference between the XM108s and the standard tyres at the time, for traction and soil protection,” Thornton concludes.