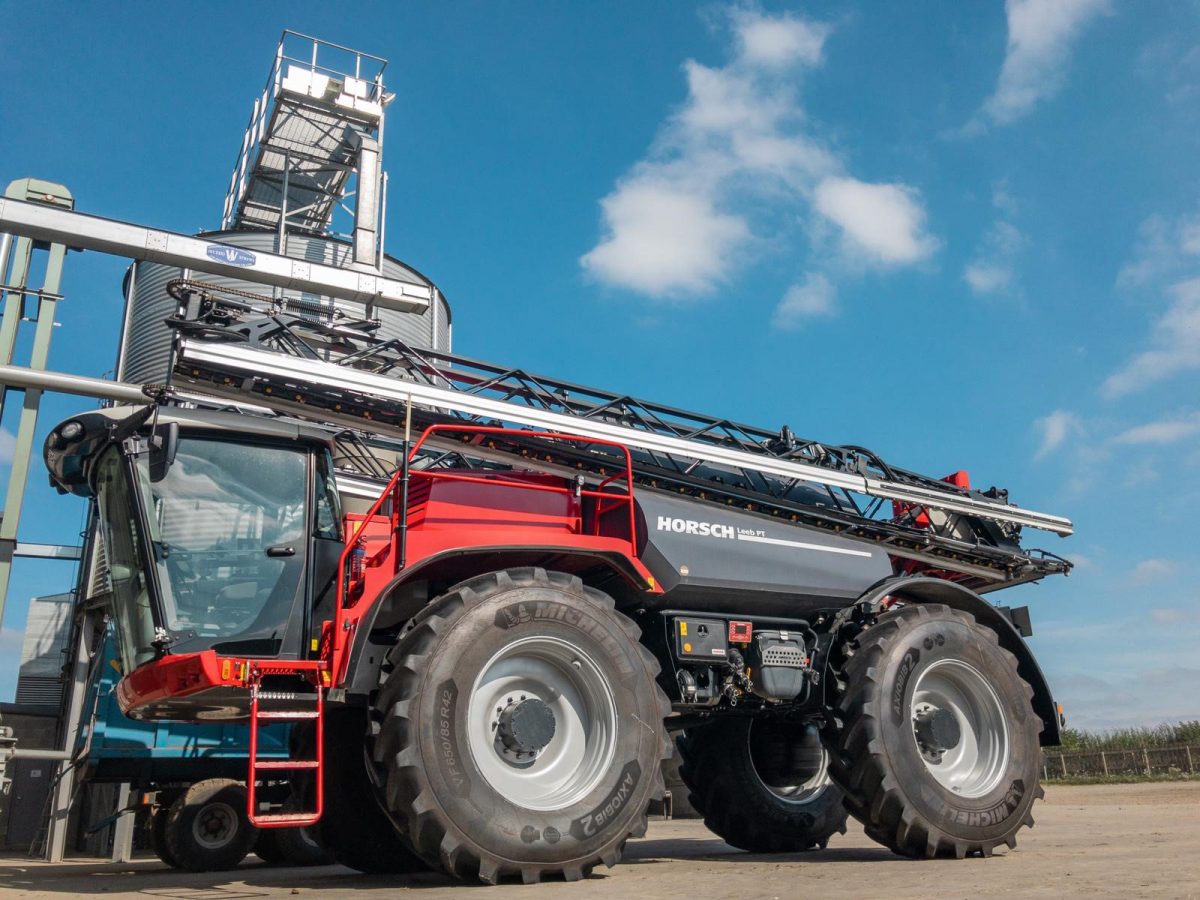 The family-run business, in Nottinghamshire, took delivery of the UK’s first Horsch Leeb 8.300 PT last summer. The sprayer arrived as a prototype from Horsch’s headquarters in Germany fitted with a competitor’s rubber, but Flawborough Farms has since switched to Michelin VF 650/85 R42 AxioBib 2 183D tyres to unlock the machine’s maximum performance.

Supplied and fitted by Michelin Exelagri dealer Bush Tyres, the large high-flotation tyres are designed to provide excellent traction for high-horsepower heavy farm machinery. They can run at very low pressures, minimising soil compaction and crop damage in the field.

Tom Hawthorne, partner at Flawborough Farms, says: “The AxioBib 2 was the best tyre available to do the job we needed. I wanted a tyre that can carry the most weight and acts as a very good flotation wheel, but also one that I can use as late as I dare when growing the crop.

“This AxioBib 2 is the biggest tyre we can have, without going too crazily wide for the road or for the crop in the field. We do have to move to a narrow row-crop wheel eventually, but we want to keep this tyre on as late into the spring as possible, so the 650 width is ideal.

“Because these tyres are so tall, they give me the clearance I need when spraying the crop. They can carry heavy weights at very low pressures, while the speeds they can give me are as good as you can get.”

The Horsch Leeb 8.300 PT is being used for spraying Flawborough Farms’ combinable crops, including wheat, barley, beans, hybrid rye and maize. It is fitted with an 8,000 litre fertiliser tank and a 36 metre boom.

Despite the wet weather in recent months restricting its use, Hawthorne is delighted with how the sprayer has performed since pairing it with its Michelin AxioBib 2 fitments.

The tyres benefit from Michelin’s patented Ultraflex technology and can carry considerably more weight than standard farm tyres – making them particularly desirable given the increasing weight of modern farm machinery.

“I’ve been brought up on Michelin. They are a premium product but, when you factor in the longevity and reliability they deliver, they work out to be very competitive in our experience,” adds Hawthorne.

“We also get great support from Michelin. Our local account manager comes out to visit us regularly, weighing the tyres, setting them up and making sure everything works as it should. We’re a big Michelin farm and have never been let down.”

With more than 15 years’ experience in contract farming, Flawborough Farms has expanded steadily and now manages a substantial acreage around the Nottinghamshire, Lincolnshire and Leicestershire borders.