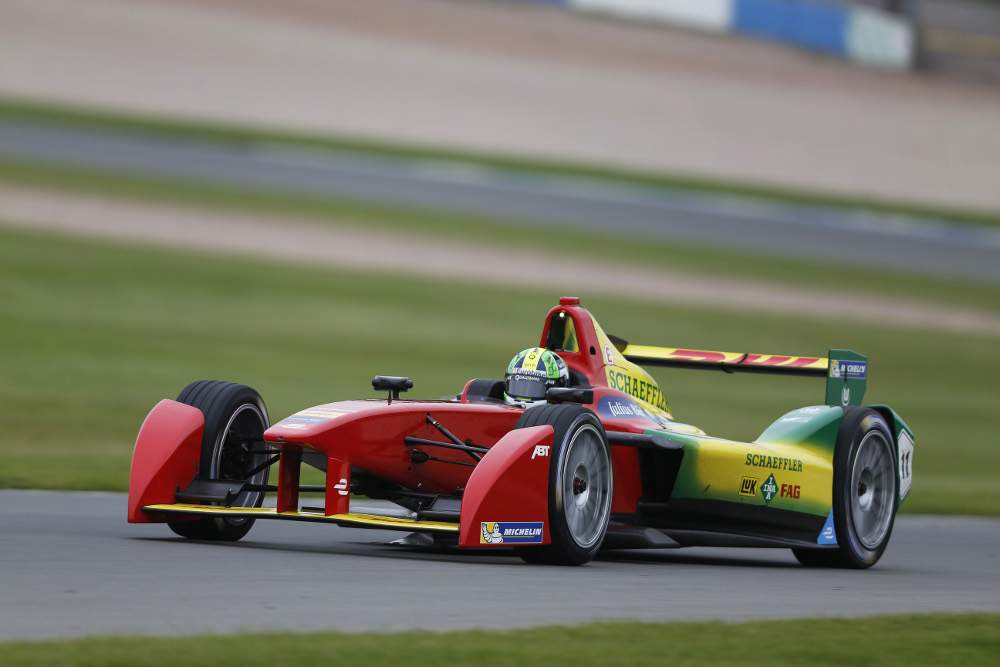 Lucas di Grassi became the first driver to record a time in the 1:29s on day four of pre-season testing at Donington Park. The Abt Schaeffler driver used the 200kw qualifying mode to post a lap of 1:29.920 to break the new lap record his team-mate Daniel Abt set yesterday. The Brazilian was well clear of his rivals, who were headed by Renault e.dams’ driver Sebastien Buemi.

“I have to say that going for the time is not as important as working on the reliability of the car,” said di Grassi. “Of course working on the performance is important, but we know that performance here doesn’t necessarily translate to what we will see at the other tracks. I think the lap time shows promise and it’s good to know that our package is running well at 200kw.”

Buemi said: “To be honest we focussed on race simulations or at least 150kw stints and we learned a lot of things. We feel like there are things we can still improve on the car in terms of performance and reliability. We trust our people and our system and we will work hard to get the most out of the car for the rest of testing. Clearly we don’t want to show our hand but you also need to experience what you are capable of doing. You try to play the game and see what happens. Abt look strong which is good but I’m confident with the people we have we can do a good job.”

Bruno Senna was third fastest after an encouraging test for Mahindra Racing: “Today has gone not too bad; we tried a few things and were happy with what we learned,” he said. “The new package seems good and most of all has been reliable, although we’re perhaps not the quickest out there at the moment. Next week we need to focus on maximising our efficiency and it will be interesting to see where everyone is in the final session.”

GP2 race winner Nathanael Berthon had his first run in the Formula E car as he took to the track for Team Aguri. The Frenchman was one of the busiest drivers on track, racking up 68 laps as the team continued to work on the set-up of its car.

It was another tough day for Andretti, although Simona de Silvestro did manage to complete a full lap without stopping. However, she was unable to set a representative time and the team remains on the backfoot with just next week’s test remaining before the cars are packed up and shipped to China.

Trulli finds itself in a similar situation, with neither of its cars appearing on track once again. All the teams have one last chance to get prepared for the Beijing ePrix on October 17. The final pre-season test takes place at Donington Park on August 24 and 25.