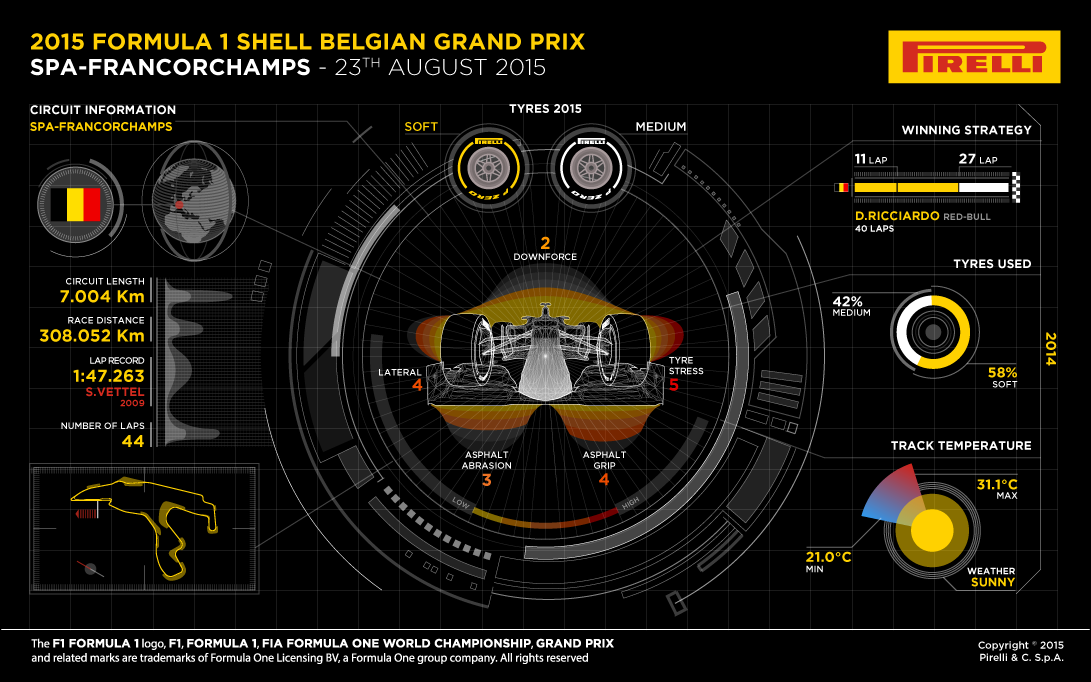 Pirelli has nominated the most versatile tyres in its range, the P Zero White medium and P Zero Yellow soft, to combat the Belgian grand prix’s fast Spa circuit. Supplying the same tyre nomination for Spa as it did for the Hungaroring, despite the differences in the two tracks, shows the range provided by Pirelli’s middle two Formula One P Zero compounds. Motorsport director Paul Hembery comments that the “two circuits present a very marked contrast.

“Whereas Hungary was tight and twisty, Spa is open and flat-out, making it a favourite among all the drivers. We’ve got plenty of high-energy loads going through the tyres in many directions due to all the different forces at work, but ambient temperatures still tend to be quite low, so the soft and medium tyres represent the best compromise between performance and durability.

“Spa is a race where anything can happen, with a high incidence of safety cars and changing weather, so tyre strategy is important, as well as each team’s ability to constantly read the race and react quickly to any opportunities that present themselves. The recent Spa 24 Hours – which is our biggest event of the year – featured more changes of lead than you could count, as well as a succession of incidents and safety cars in the first half of the race. That showcases just what a spectacular and unpredictable competition this amazing circuit can regularly provide.”

Pirelli says managing the amount of energy going through the tyres is one of the keys to success at Spa. This consists of not only forces exerted through cornering, braking, and acceleration but also the loads generated by the huge changes in elevation, typified by the famous Eau Rouge-Raidillon complex (which subjects the tyre structure and shoulder to an unparalleled 1g compression).

The biggest difficulty with the variable weather in Spa is that many variations exist over the course of just a single lap, making it hard to identify the correct tyre when it rains. It’s possible for one part of the circuit to be completely soaked, but another part to be a hundred per cent dry. Drainage is an issue, meaning that it’s easy to be caught out by streams of water running across the track surface.

Last year at Spa, Daniel Ricciardo won his second consecutive race for Red Bull (the third victory of his career) using a two-stop strategy for the 44-lap race from fifth on the grid. He did two stints on the soft tyre and a final stint on the medium tyre, stopping on laps 11 and 26. He set the fastest lap of the race on the final tour with the medium tyre, underlining the consistency of the compound even over a long stint.

Pirelli expects a performance gap between the two compounds: 1.8 – 2.0 seconds per lap.