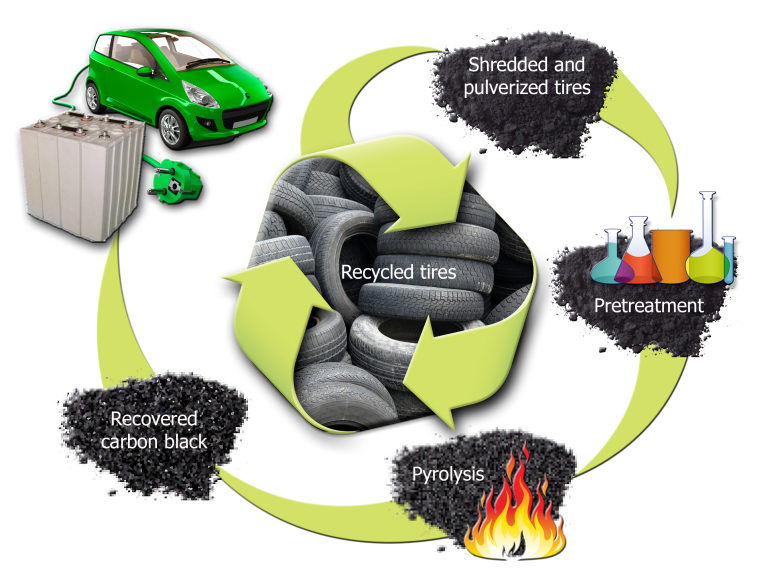 Researchers at the US Department of Energy’s Oak Ridge National Laboratory are aiming are advocating tyre pyrolysis as a way of recovering carbon black for use as a graphite substitute in lithium-ion batteries. The goal is to scale up the recovery process and demonstrate applications as anodes for lithium-ion batteries in large-format “pouch cells”. These batteries could then be used in plug-in electric vehicles and to store energy produced by wind and solar sources.

By modifying the microstructural characteristics of carbon black recovered from discarded tyres, a team led by scientists Parans Paranthaman and Amit Naskar is developing what they believe is a better anode for lithium-ion batteries (an anode is a negatively charged electrode used as a host for storing lithium during charging).

The method, outlined in a paper published in the journal RSC Advances earlier in 2014, suggests advantages over conventional approaches to making anodes for lithium-ion batteries.

“Using waste tyres for products such as energy storage is very attractive not only from the carbon materials recovery perspective but also for controlling environmental hazards caused by waste tyre stock piles,” Paranthaman said.

The ORNL technique uses a proprietary pre-treatment to recover pyrolytic carbon black material, which is similar to graphite but man-made. When used in anodes of lithium-ion batteries, researchers produced a small, laboratory-scale battery with a reversible capacity that is higher than what is possible with commercial graphite materials. According to ORNL, after 100 cycles the capacity measures nearly 390 milliamp hours per gram of carbon anode, which exceeds the best properties of commercial graphite. Researchers attribute this to the unique microstructure of the tyre-derived carbon.

“This kind of performance is highly encouraging, especially in light of the fact that the global battery market for vehicles and military applications is approaching $78 billion and the materials market is expected to hit $11 billion in 2018,” Paranthaman said.

Anodes are one of the leading battery components, with 11 to 15 per cent of the materials market share, according to Naskar, who noted that the new method could eliminate a number of hurdles.

ORNL plans to work with US industry to license this technology and produce lithium-ion cells for automobile, stationary storage, medical and military applications. ORNL posted a solicitation for this which closed in mid-September.

In addition to Paranthaman and Naskar co-researcherse Zhonghe Bi, Yunchao Li, Sam Akato, Dipendu Saha, Miaofang Chi and Craig Bridges are working with David Wood and Jianlin Li on a pilot manufacturing process to scale up the recovery of material and demonstrate applications as anodes for lithium-ion batteries in large-format pouch cells. Researchers expect these batteries to be less expensive than those manufactured with commercial carbon powders.

The research on conversion of recycled tyres to graphite powders was funded by the laboratory’s Technology Innovation Program while the research on battery fabrication and electrochemical testing was sponsored by DOE’s Office of Basic Energy Sciences, Materials Sciences and Engineering Division. Transmission electron microscopy research was supported by ORNL’s Center for Nanophase Materials Sciences, a DOE Office of Science user facility.