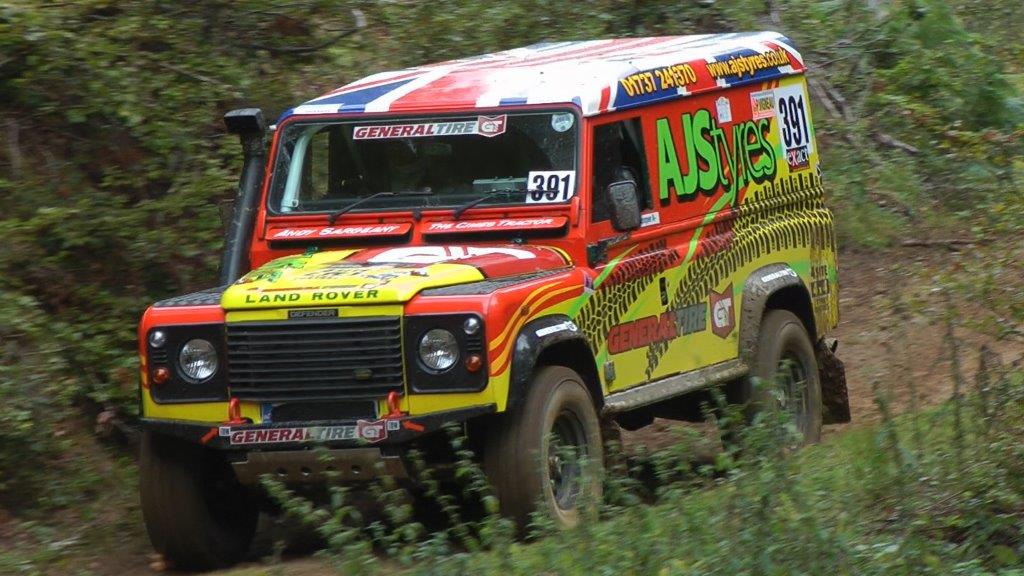 The proprietor of AJS Tyres and specialist AJS 4×4 in Lower Kingswood for over 35 years, Andy Sargeant was British Off Road Champion in 1989 and has competed in more off-road rallies than he cares to remember. He says the most important thing in any form of motorsport – or indeed in general driving – is to keep a full set of inflated tyres under your vehicle to have full control. So when he defeated the tough conditions of the recent Rallye des Cimes in his Defender 110 TD5 – the self-styled “Cimes Tractor” – the fact that he did it on the new General Tire Grabber MT made quite an impression. Sargeant says he will now pass on this experience to Land Rover owning customers.

Sargeant says he expected a tough race against some top French and British off-road drivers in some expensive lightweight buggies, and set his sights on getting to the end of the rally. Conditions over the weekend went from bad to worse quickly with some torrential rain. Sargeant says he felt the driving conditions were the worst he had ever come across in his 40 years’ experience of off-road driving.

Classifying safely on the Friday afternoon in Maule, Sargeant then headed off to D’Iraty to tackle the six steep, rocky stages, which presented no major problems except visibility. All six stages were completed with a very clean car just before a massive downpour of huge raindrops and a thunder and lightning display. The only servicing required on the Defender was to keep the washer bottle full and wash the outside of the Defender, ensuring every stage was started with a clean car. The Defenders TPMS system also proved invaluable – Sargeant said it gave him total confidence, knowing his tyre pressures were spot on.

Steady overnight rain did not bode well for the next morning as the production vehicles ran first ahead of the special 4×4 and 4×2 buggies. The first stage was Esquiule, which found Andy more than a tad worried, aware of the dangerous double steep downhill hairpin and how the huge 110 Defender was going to cope. He needn’t have worried, as the Defender slipped round the double hairpin with relative ease to huge cheers, but 250 metres further down on a left hand curve the 110 slipped into a huge tree with no tyre ruts to keep it in check, stopping it dead with branches falling on the roof. Sargeant’s first thoughts were that the impact must have ended his rally, but after carefully limping to service in pouring rain, the damage was far less than feared. The Grabber MT’s three-ply sidewalls were unscathed, despite serious rock contact.

The second stage, Ambeltze, was in a heavy wood with a very wet and slippery clay-like surface, on which many struggled for grip. Having reached the end Sargeant made for Barcus Suhola where many struggled to reach the start of the stage because of the steep uphill off camber climb. With the rain starting to ease, the 110 finished well.

Trois Villes Madeleine was the next stage. Normally finishing at the top of La Madeleine, the stage was terminated at the bottom of the final climb due to the incessant rain and an almost ice like surface. The 110 again slid and slipped its way round but got through to the finish line in fair time. Sargeant then completed the last two stages, effectively a repeat of Barcus Suhola and Trois Villes Madeleine. By now the rain had stopped and the conditions improved with the Defender 110 performing well and crossing the finish line to great relief of Andy and his co-driver.

Sargeant’s goal was to enter, compete and finish the Rallye des Cimes with a vehicle fully prepared in his own workshop, which the team did with great pride. Their Defender 110 TD5 was the biggest and heaviest vehicle competing in the Rallye, presenting a mighty challenge which was successfully overcome.

Sargeant said the one set of General Grabber MT tyres fitted to the 110 proved that it is “a truly fantastic tyre” that he would recommend to anyone: “Thank you so much General Tire. Without doubt a super tough tyre with great levels of grip which we will use with total confidence on the last two rallies of the season.”