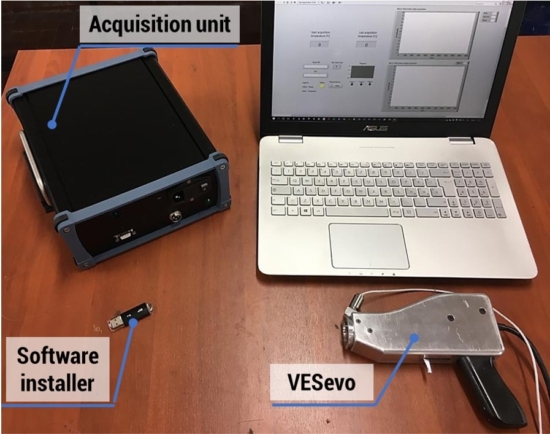 VESevo, which is derived from the Latin name of the iconic volcano and symbol of the Neapolitan territory, is the result of the research activities of the Vehicle Dynamics group of the Federico II University of Naples in collaboration with the Academic Spin-off 'MegaRide - Applied Vehicle Research'. (Photo: Vesevo; Megaride)

Vesevo has been awarded Hardware Innovation of the Year in the Automotive Testing Technology International Awards. According to the company, the VESevo system won thanks to its hardware which offers detailed analysis of the quality of tyres and predicts their interaction with the vehicle – offering advantages, above all, in safety, performance, and quality control.

The device, which is the result of research carried by the Vehicle Dynamics group at the Federico II Department of Industrial Engineering and partner company MegaRide, is aimed at applications in the automotive and rubber production industries, including consumer goods.

In February 2021, VESevo was used in Formula 1. In June, the company became partner to half of the teams in Formula 1 as well as those in WRC, Formula E and Moto GP. All of this culminated in the technology’s November recognition Automotive Testing Technology International Awards.

VESevo came out top of the category against stiff competition from automotive industry giants including Volvo, CSM, Messring and AB Dynamics, for its “innovativeness” – as underlined by the jurors – in the tyre sector which represents a frontier for simulation and sustainable development of the entire automotive sector.

“This remarkable new device takes an unprecedented approach to non-destructive tyre testing and characterization,” judges stated. Underlining the company’s achievement, and the uniqueness of the device, the judges noted that VESevo “was conceived with the aim of analyzing the tyre’s tread viscoelasticity, overcoming the usual issues related to the removal of samples, which make them unusable. This type of information makes it possible to predict the behaviour of the tyre and the whole vehicle in variable operating conditions and progressive wear conditions. As the viscoelastic properties of tyres are still not well understood, the hardware has been welcomed by the automotive, tire and motorsports industries.”

Awards judge Marc Noordeloos affirmed, “VESevo’s device is yet another reminder of the development advantages of motorsport in the tyre world. The ability to analyze viscoelasticity and predict tyre behaviour is key in the world of racing and will surely be a huge advantage to future tyre development for road cars.”

Francesco Carputo, VESevo chief technical officer, added: “Innovation in the automotive sector increasingly passes through tyres, which are the only point of contact between the vehicle and the road surface: in a space of a few square centimetres, numerous physical and chemical phenomena take place which deeply affect the behavior of the entire vehicle, with important implications in terms of safety. VESevo is the only system that allows you to analyze the quality of the tyres and predict the behaviour of the tyres themselves and the car in advance, not in the laboratory and in an abstract way, but just before their use, without damaging them”.

VESevo, which is derived from the Latin name of the iconic volcano and symbol of the Neapolitan territory, is the result of the research activities of the Vehicle Dynamics group of the Federico II University of Naples in collaboration with the Academic Spin-off ‘MegaRide – Applied Vehicle Research’.

VESevo has been adopted by 6 teams in Formula 1, 4 of Formula E, 2 of the World Rally Championship, 2 of MotoGP, 1 of NASCAR and by numerous companies in the automotive sector.