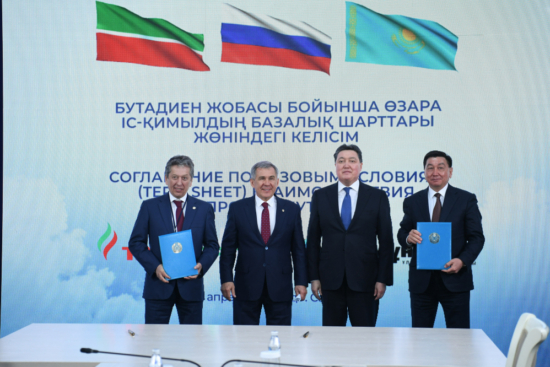 Russian oil and gas company Tatneft intends to produce butadiene rubbers in Kazakhstan, and the recipients of plant output include Tatneft’s own tyre production businesses.

Under a recently-signed agreement, Tatneft will jointly set up a facility with Kazakhstan’s state-owned oil and gas company, KazMunayGas, in the Atyrau region. The facility is expected to be completed by 2025 and have a capacity for 186 thousand tonnes of butadiene rubbers and 170 thousand tonnes of isobutane.

The raw material for the factory will be butane produced by Tengizchevroil, a joint venture that KazMunayGas holds a 20 per cent share in. Finished products will be supplied to the KamaTyresKZ tyre manufacturing factory in Kazakhstan’s Karaganda region, as well as for export to markets such as Europe, Russia, China and Turkey.

The agreement outlining the basic terms of interaction on the butadiene project was signed by Nail Maganov, general director of Tatneft, and Alik Aidarbayev, chairman of the KazMunayGas Management Board.

“Tatneft has a long-standing good partnership with Kazakhstani colleagues. The new joint butadiene production project is closely related to the construction of the tyre manufacturing complex in Saran. We will provide local raw materials to ensure tyre production in Kazakhstan,” said Nail Maganov.

“This event is another evidence of close cooperation between our countries,” added Alik Aidarbayev. “We actively cooperate with Tatneft in the areas of enhanced oil recovery, efficient development of mature fields and in many other areas. And now we are jointly starting the implementation of a large gas chemical project in Kazakhstan for the production of butadiene, the future products of which will also be supplied to the tyre manufacturing factory. Tatneft is one of the leaders in the production of butadiene and processing the products thereof. We are confident that the experience and the existing competencies of Tatneft and KazMunayGas will make it possible to successfully implement this project.”