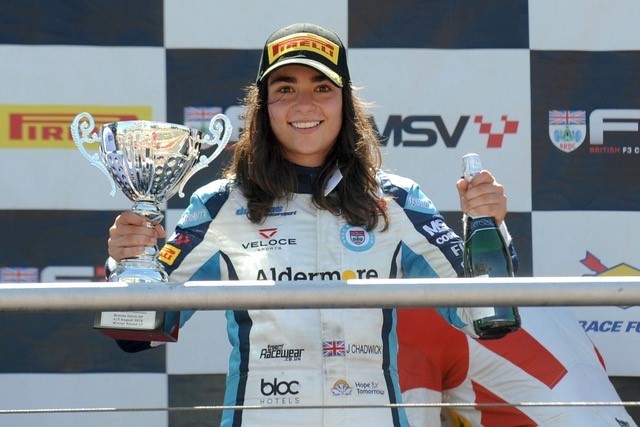 Jamie Chadwick, the only female driver to win a British Formula 3 Championship race, will make a high-profile test debut with ABB FIA Formula E Championship team NIO in Riyadh, Saudi Arabia, on Sunday 16 December – the day after the opening e-Prix of Season 5. NIO said that it is determined to help provide key opportunities on the international stage for the best young female racing talent, confirming 20-year-old Chadwick for the six-hour test at the Ad Diriyah Street Circuit. The British Racing Drivers’ Club (BRDC) ‘Rising Star’, from Tetbury in Gloucestershire, will pilot the NIO 004 chassis.

Making her car racing debut in 2013 in the UK-based Ginetta Junior Championship, after winning a coveted scholarship, Jamie made the leap into endurance racing in the British GT4 Championship in 2015 sharing an Aston Martin V8 Vantage with Ross Gunn. The pairing went on to win the title, with Jamie becoming the youngest and first ever female GT4 Champion.

Moving into single-seater competition in 2017 in the BRDC British Formula 3 Championship, in her sophomore F3 season this year Jamie made national headlines as the first ever lady racer to win a British F3 race with a superb victory at Brands Hatch Grand Prix Circuit.

Away from on-track competition, she has recently been confirmed as an ambassador for the Dare to be Different initiative which seeks to inspire the next generation of female racers and boost participation of women across all forms of motorsport.

Jamie Chadwick, test driver, NIO Formula E Team: “I am delighted to be teaming up with NIO for the official Formula E test in Riyadh. Formula E is fast becoming the future of our sport and the Gen 2 car looks fantastic. I am incredibly grateful to NIO for the opportunity and I’m excited to work closely with the team to ensure we have a successful test.”

Gérry Hughes, team principal, NIO Formula E Team: “At NIO we are extremely proud to be promoting and nurturing ‘home grown’ female driver talent and what better way to demonstrate that than putting Jamie into one of the Generation 2 NIO 004 race cars for the aforementioned test event.

“I have only known Jamie for a short period of time but, in that time, she has exhibited a very mature and methodical approach to the task in hand and, as such, I am very interested to see how she fairs out on track.”

The opening round of the 2018/2019 ABB FIA Formula E Championship season will take place on Saturday, 15 December, at Ad Diriyah Street Circuit in Saudi Arabia. Official testing will follow at the Riyadh track on Sunday, 16 December.