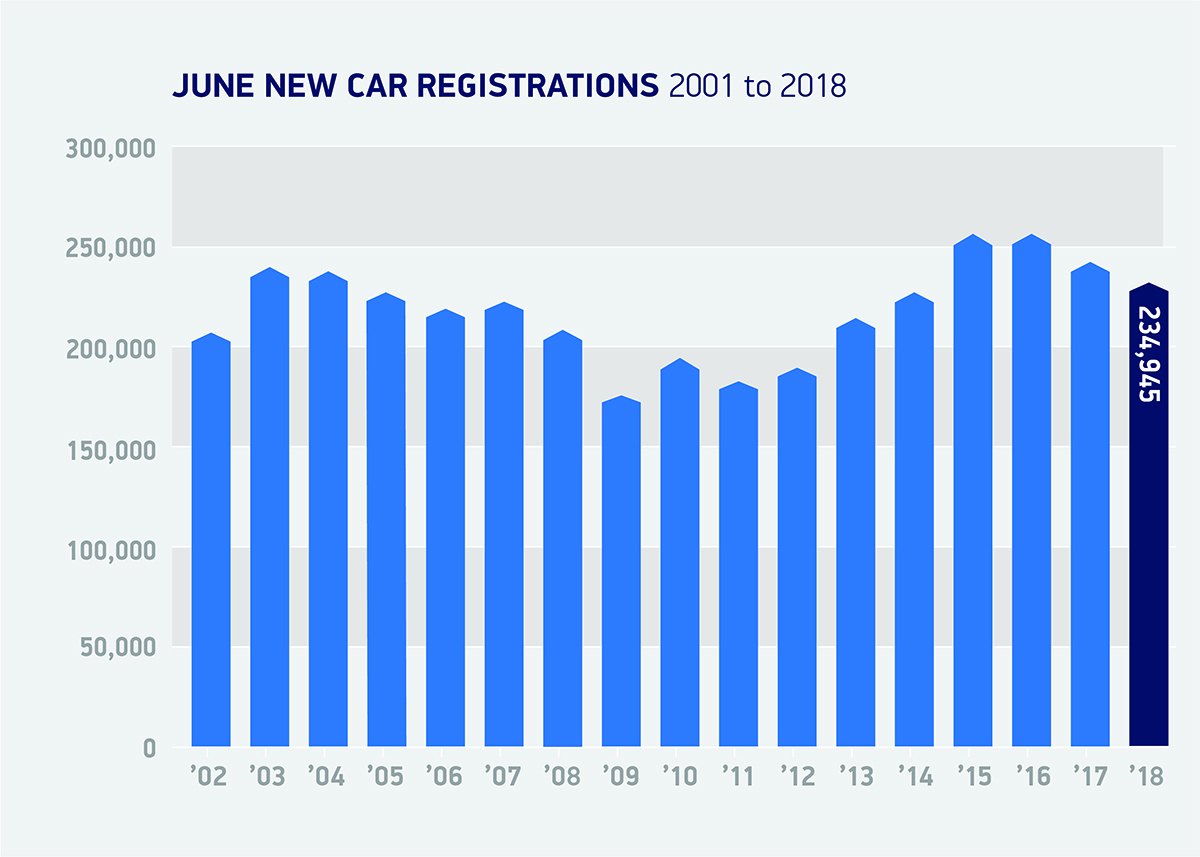 The Society of Motor Manufacturers and Traders (SMMT) is urging the UK government to act to support the sale of traditionally fuelled vehicles following the news that the UK new car market declined moderately in June. Year-on-year demand fell by -3.5 per cent, the SMMT stated, as 234,945 new cars joined British roads, representing relative stabilisation considering recent turbulence over the past year or so. While alternatively fuelled vehicle sales continue to rise, they are not yet at a level that can relieve the decline in traditionally fuelled vehicle sales, and the SMMT argues for government to provide increased support for petrol and especially new technology diesel vehicles.

Demand from larger fleets fell -6.4 per cent, but business buyers with fewer than 25 vehicles on their books returned to showrooms, registering an uplift in demand of 11.3 per cent after an 11-month long hiatus. Private demand was largely flat, at -0.6 per cent.

Smaller cars remained most popular, with Supermini and Lower Medium vehicles taking a combined 57.4 per cent market share. However, Dual Purpose was the fastest growing segment, with demand up by some 16.4 per cent, 6,710 more than in the same month last year. Dual Purpose, Executive (+4.3 per cent) and Luxury Saloon (+1.3 per cent) were the only segments to register growth in June.

There was good news for the alternatively fuelled vehicle sector, with a 45.0 per cent increase in plug-in and hybrid registrations as consumers responded to a growing range of models. Petrol cars also attracted more buyers, with demand up 12.3 per cent. However, this growth was not enough to offset continuing decline in diesel registrations, with a -28.2 per cent fall a result of continuing consumer uncertainty over future policy towards this technology. June capped off a turbulent first half of the year, distorted by the previous year’s VED hikes, with the market experiencing a severe double-digit decline in March followed by a stronger April and May, when year on year demand grew. Year-to-date, overall demand remains down, by some -6.3 per cent to 1,313,994 units.

Mike Hawes, SMMT chief executive, said: “Despite a rocky first six months for the new car market, it’s great to see demand for alternatively fuelled vehicles continue to rise. Given these cars still represent only one in 20 registrations, however, they cannot yet have the impact in driving down overall emissions that conventional vehicles, including diesels, continue to deliver. Recent government statements acknowledging the importance of petrol and diesel are encouraging. However, we now need a strategy that supports industry investment into next generation technologies and puts motorists back in the driving seat, encouraged to buy the car that best suits their needs – whatever its fuel type.”