You are here: Home1 / News2 / Bohnenkamp growing in range and reach

Bohnenkamp growing in range and reach 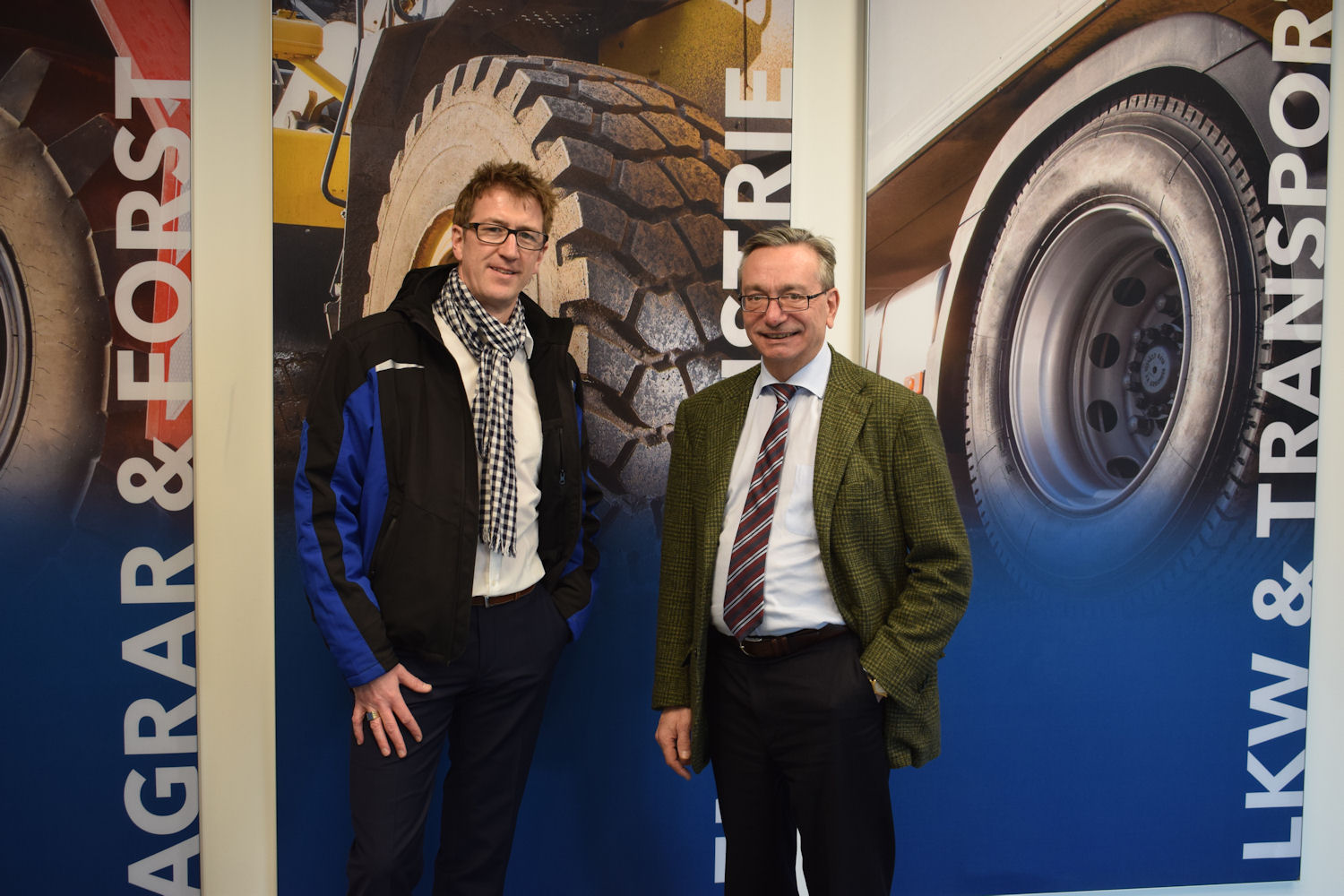 The Bohnenkamp name has been a familiar one to us for some years now, not least through its acquisition of the divested STARCO aftermarket business in 2016, and when we visited the wholesaler’s headquarters for the first time recently we were welcomed by a company that is still growing: Vast two-storey warehouses are currently being erected alongside the existing warehousing complex, and when we met with Gregor Rüth, chief executive officer of the Bohnenkamp Group, we did so in an administrative building so new it was still receiving the finishing touches. Growth at Bohnenkamp hasn’t just been physical, either – rather, the construction work occurring there parallels a wider expansion of the company’s presence in Europe and a broadening of the range of products it offers. Yet this growth hasn’t changed Bohnenkamp’s focus on being close to its customers.

“After acquiring the STARCO aftermarket business we’re better represented as a full-range supplier, we’ve gained stronger representation in Scandinavia and are well positioned for growth in Eastern European markets,” states Rüth. Indeed, with a presence now stretching eastwards to central Russia and Kazakhstan, north to Finland and south into Hungary, it’s easy to see why Bohnenkamp considers itself “Europe’s leading marketer and wholesaler for agricultural tyres and one of the leading suppliers for industrial, earthmover and truck tyres.” The company has come a very long way from its humble origins as a firm helping farmers get back on their feet in difficult times.

Bohnenkamp was founded in 1950 as a supplier of vehicle axles to customers in Germany’s north. Speaking about the firm’s earliest days, Gregor Rüth explains that the only vehicles available in any quantity back then were ex-military vehicles, and company founder Friedel Bohnenkamp filled a gap in the market by supplying the parts needed for their conversion to agricultural applications. Tyres and wheels – now the company’s main focus – followed later on.

The Bohnenkamp we know today is the product of steady growth over seven decades. The company moved to its current headquarters location in Osnabrück in 1974 and since then has significantly enlarged its operations there, most notably through expansion programmes in 1992 and 2000. Growth outside Germany first came in 2005 with the opening of Bohnenkamp s.r.o. in Slovakia and was followed by further internationalisation from 2010 onwards with the founding of subsidiaries in the Netherlands, Austria and Switzerland, and later with new businesses further north and east.

With more than 50 per cent share of total turnover, tyres are Bohnenkamp’s bread and butter. Until quite recently these tyres were almost exclusively products for the agricultural and forestry segments, where its main brands were and remain BKT and Alliance, but now Bohnenkamp sells products for all off-road segments.

“Starting five years ago, we’ve followed two key strategies,” Rüth elaborates. “The first is to introduce Bohnenkamp into new markets. The second is that we’ve become active and grown in product segments outside of agricultural and forestry. We entered the earthmover and industrial tyre segments with the addition of port, forklift truck, large quarry and excavator tyres to our portfolio. We also built up our truck and transport segment to offer a complete truck tyre programme that, with brands such as Windpower and Nokian, covers budget to premium. Later, with the acquisition of STARCO’s businesses, we significantly expanded our previously limited business with small tyres; Kenda and Deli make up 70 to 80 per cent of procurement volume in this segment.”

Sales of complete wheels account for around 30 per cent of Bohnenkamp’s turnover; these are primarily sold to OE2 customers such as agricultural machinery manufacturers. Several of these companies
– Grimme and Amazone are but two – are located within a 100-kilometre radius of the main Bohnenkamp warehouses. “These manufacturers’ close proximity has helped us to strongly grow our complete wheel business,” says Rüth. Other products, such as tubes, rims and vehicle parts (including axles) account for the remainder of turnover. Sales are more or less evenly divided between tyre trade, agricultural machinery trade and original equipment customers.

The expansion that followed the STARCO deal in 2016 transformed Bohnenkamp into a full range supplier. “This has helped us a great deal, even with our existing clients. When someone visits our webshop they don’t need to visit further webshops – we’ve become a one-stop shop for specialty tyres,” says Rüth. The warehouses in Osnabrück contain some 10,000 individual product articles, and incoming orders suffice to empty and replenish the 80,000 square metres of storage space there six to seven times a year. As well as supplying customers in Germany, rarer sizes and products are also shipped from Osnabrück to Bohnenkamp’s 24 sales locations in 17 countries, including the 15 sites that came into the fold in 2016.

“We’ve made large investments in our subsidiaries, building new sites in Austria and Switzerland and expanding in Holland, Belgium and Slovakia to help these sites facilitate their own growth,” says Gregor Rüth. “Nonetheless, when offering 10,000 articles you can’t store these in 5,000 square metres. All subsidiaries therefore depend upon our central warehouse so they can also offer a full portfolio. Availability is everything in our business – stocks and availability are decisive in Bohnenkamp’s success. You can’t expect customers to wait a week for a tyre needed to get a machine up and running again.”

While the Bohnenkamp head office supplies subsidiaries with rarer tyre sizes and also takes ultimate responsibility for these businesses, the chief executive officer’s preferred approach is to give the subsidiaries their own operational responsibility for activities such as warehousing and sales. “Local teams can best appraise their own business and can implement measures appropriate to this. They make their own day-to-day decisions autonomously, even if we have a say. We want to keep the local flavour in each region and avoid long decision-making channels.”

Bohnenkamp is market leader for specialty tyres in Western Europe and the Western Group generates around 70 per cent of all company turnover, yet the tendency is towards greater percentage growth outside this region. Gregor Rüth considers Eastern Europe, where “white patches still exist on the map,” the most promising region for expansion. In countries such as Ukraine and Russia, today major export markets for agricultural machinery, the main competition has historically come from local manufacturers. “We’ll set up in new locations if we see a strategic potential. The business model we now follow is the same in all new markets – it is based upon availability and closeness to customers.”

Bohnenkamp already distributes the BKT brand throughout its new Eastern Group territory and it is the favoured partner for Windpower in all areas. The second of these is a truck tyre range manufactured in China, and when the talk turned to European Union tariffs on such products, the chief executive officer referred to tariffs as “a temporary fact.” Tariffs or no tariffs, the wholesaler intends to proceed further with Windpower as it foresees and has already seen that fundamental market price levels will rise for truck tyres, both premium and budget.

“The measure will provide retreaders with a benefit again for a certain time, but not permanently,” he adds. “Affordable tyres will continue to come from China, and then there are tyres from Thailand and other countries that have a cost advantage. Tariffs have been in place in Russia (and the entire Eurasian Economic Area) for some time, however they haven’t stopped the development of Chinese brands there.”

Another factor to consider when looking at tariffs on truck tyres is that within the mid segment where Bohnenkamp is active, tyres aren’t solely sold according to price – quality also plays a role. The market for such tyres will remain, regardless of whether they come from China or somewhere else. But as Gregor Rüth comments, it takes time to set up production within a new country, and if tyres suddenly stopped arriving from China it would lead to a vacuum of at least 500,000 tyres a year. “There is de facto no alternative to these tyres from China.”

Last year, Bohnenkamp achieved a group-wide turnover of 340 million euros, a year-on-year increase of 29.8 per cent. This top-line result was helped by the inclusion of a full year of former STARCO aftermarket segment turnover (the result for 2016 contained only half a year) and it also reflects price increases in the market that followed the rise in raw material costs. Nevertheless, Rüth stresses that Bohnenkamp experienced growth even when leaving STARCO and price rises out of the equation.

Developments in the first half of 2018 have been positive so far, with brisk demand from OE2 customers propelling turnover along nicely. An ever-larger proportion of Bohnenkamp’s business also involves parcel shipments. This has been the case since the STARCO deal, and during peak times the wholesaler now ships around 1,000 parcels a day. As for the rest of 2018, Gregor Rüth says we’ll have to wait and see. In closing, the chief executive officer comments that Bohnenkamp has its hands full looking after its newly-enlarged geography and sees “many opportunities to grow” in Eastern Europe.