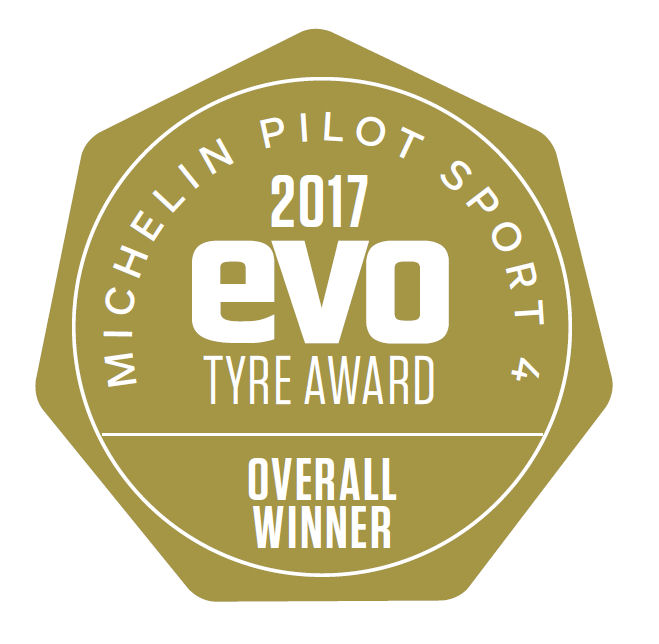 In the preamble to its 2017 tyre test, Evo magazine observes that “all tyres are black and round and keep your alloys off the ground, but all tyres are not created equal.” Well said, and true. To help its readers find the rubber that best suits their budgets and requirements, evo has tested nine tyre brands in the popular 225/40 R18 size. The results can be found in the current issue (evo #238), and they’re good news for Michelin.

Overall victory went to the Michelin Pilot Sport 4 thanks in no small part to a “clean sweep of subjective ratings.” Testers John Barker and Kim Adams considered its feel “peerless in the wet” and also praised its performance in dry conditions, concluding that the Pilot Sport 4 is “simply a great tyre.”

The swiftest tyre around both the wet and dry circuits was the Pirelli P Zero PZ4; its solid performance, including best in dry braking, was let down a little by a poor result in the curved aquaplaning test, yet it scored sufficient points to end the day as runner-up. At £94.00 (evo took prices from blackcircles.com where possible), it was also the most expensive of the nine tyres.

Continental rounded out the podium, with its PremiumContact 6 finishing in third place. Evo wrote that the while the Conti tyre was the third-fastest tyre in the wet and second in wet braking, it displayed “no outstanding traits” in the wet handling test. In the dry handling test the PremiumContact 6 was the slowest of the nine tyres, however the evo team commented that it “felt better than that,” being “biddable and responsive.”

The fourth-placed tyre was the heaviest of them all, the least refined on the road and the tyre with the highest rolling resistance. On the positive side of the balance sheet, the Falken Azenis Fk510 “performed well in both wet and dry measured tests and was particularly strong in curved and straight-line aquaplaning.” The tyre’s “precise, accurate steering” was also commended.

Finishing fifth, the Dunlop Sport Maxx RT2 was described as a “tyre of contrasts.” Its good performance in the dry handling test was counterbalanced by mediocre results in the wet, yet it scored the best in the curved aquaplaning test. It also delivered the lowest rolling resistance.

“The highlight of the Bridgestone’s performance was its subjective feel in the wet handling test, where it ranked third thanks to good steering feel and a fragile but exploitable grip,” wrote evo in its summary of the Turanza T001 Evo. The tyre also fared well in the rolling resistance test, and was found to have “crisp, tactile steering.”

Neither outstanding nor poor in any one area of the measured tests. This was evo’s lukewarm verdict on the Hankook Ventus S1 Evo ². Although holding its own in the dry, its performance in the wet, particularly the curved aquaplaning test, was weaker. Positive qualities included steering response and ride comfort.

Evo voiced surprise at finding “such a big brand and previous strong performer” in eighth place. While the Goodyear Eagle F1 Asymmetric 3 did well in the wet handling, aquaplaning and dry braking tests, and scored well for refinement, it was slow on the dry circuit and subjectively was the lowest scoring tyre.

We’ve reached last place, and here we meet a “tyre with few redeeming qualities.” The team at evo had little positive to say about the Toyo Proxes Sport. Although at £72.00 the cheapest tyre of the bunch, and delivering a respectable result in curved aquaplaning and rolling resistance, the Toyo tyre finished last in all other objective tests. Evo thought the Proxes Sport’s subjective performance “woeful,” too.

British GP: Raikkonen incident caused by external damage, not “tyre issue... Europe will overtake the US in the electric and hybrid cars market, says Ma...