You are here: Home1 / News2 / Motorsport3 / The excitement is electric at London ePrix double header

The excitement is electric at London ePrix double header 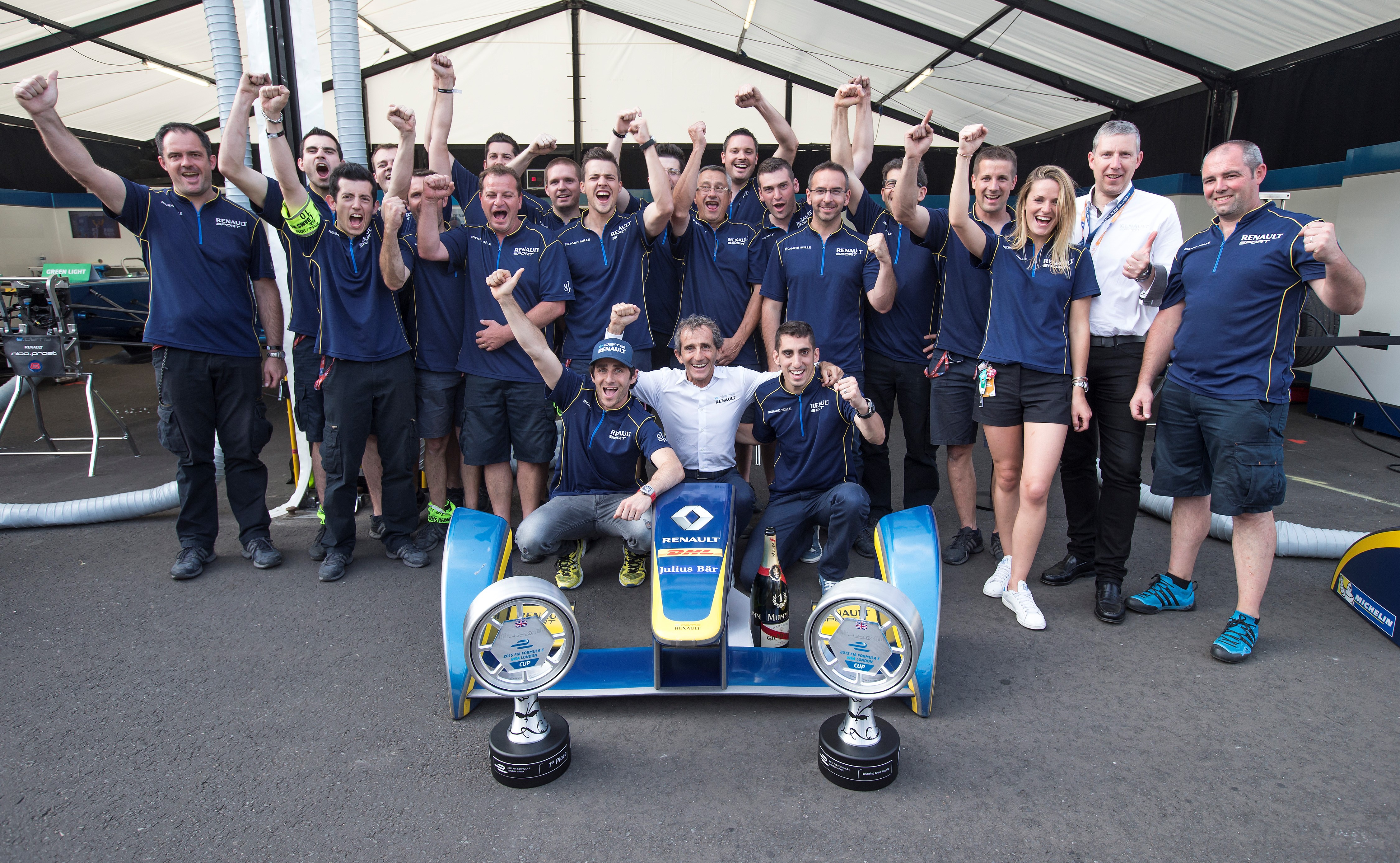 The outcome of the FIA Formula E Championship was decided at the final round in London. Sam Bird (Virgin) won the last ePrix of the season, whilst the all-electric series’ inaugural titles were won by Nelson Piquet (Nextev TCR) – Drivers’ championship – and e.dams-Renault – Constructors.

At the end of the London double-header, the team led by Alain Prost and Jean-Paul Driot saw its drivers Sébastien Buemi and Nicolas Prost finish in second and sixth position respectively. All the drivers and teams will now be stepping up their preparations in order to be ready for the start of the second season, which kicks off this coming autumn in Beijing.

For the first time in Formula E, two ePrix were held on the same weekend. After Saturday’s race had seen e.dams-Renault cap a fine season by becoming the category’s first ever winner of the Teams’ title, Sunday’s contest would determine the outcome of the first ever Drivers’ Championship.

Technical partner of the all-electric series, Renault Sport Technologies saw the 40 Spark-Renault SRT01_E – the architecture of which it has supervised throughout the year – conclude their campaign in London’s Battersea Park. Renault has done its job to perfection this season, demonstrating time and again its expertise in ensuring all ten teams benefited from an equal chance of winning in reliable, safe and fast single-seaters. It has also supported the stewards in getting to grips with the unprecedented procedures related to this new technology.

An incredible start to the season had seen six different victors in the first six races, with Lucas di Grassi (Audi Sport Abt) winning the inaugural race in Beijing. Later on, Sébastien Buemi became the first to win a second race, a feat subsequently matched by Nelson Piquet (Nextev TCR). Piquet started the second and final London race as championship leader, trailed by Sébastien Buemi and Lucas di Grassi.

Stéphane Sarrazin (Venturi) took pole position after the final qualifying session of the season was disrupted by rain. Sébastien Buemi started sixth on the grid, ahead of his title rivals Lucas di Grassi and Nelson Piquet, who were eleventh and sixteenth respectively. Stéphane Sarrazin crossed the finish line first, but he was handed a time penalty for exceeding his energy allowance, meaning that the race win went to Sam Bird. Most attention was however focused on the three title contenders.

Running fifth when the drivers came in for their mandatory pits stops to change cars, Sébastien Buemi looked on course to secure the title, but a spin on his out lap cost him a place. Despite making a number of attempts to regain his position right until the final lap, the Swiss driver was unable to find a way past Bruno Senna. Nelson Piquet finished seventh to win the championship by a single point.

The first FIA Formula E Championship titles were therefore won by Nelson Piquet and e.dams-Renault. Sébastien Buemi finished as runner-up and Nicolas Prost ended the season in sixth position. All the drivers and teams now turn their attention to testing in the summer, where they will be able to put their cars and their powertrain systems – which are open to development on certain points – through their paces.

“Congratulations to Nelson Piquet on claiming the drivers’ title which means he joins e.dams-Renault as the series’ first winners!” commented Patrice Ratti, managing director of Renault Sport Technologies. “This season has been a very successful one for three reasons. First of all, from a technical point of view, with Spark, we have managed to achieve an unprecedented level of performance and reliability for this technology. And secondly, from a sporting point of view, with the teams’ title win for e.dams Renault, brilliantly led by Alain Prost and Jean-Paul Driot. Finally, it has been a success for the teams of Alejandro Agag, CEO, Formula E, who has given us this magnificent championship. Sébastien has missed out on the drivers’ title by a point but both he and Nicolas can be proud of the superb season that they have had and which has enabled us to win the teams’ title. We’re already thinking about the future of the series. We are determined to come back stronger next season thanks to our expertise in the field of electric vehicles, against new rivals in an open formula.”