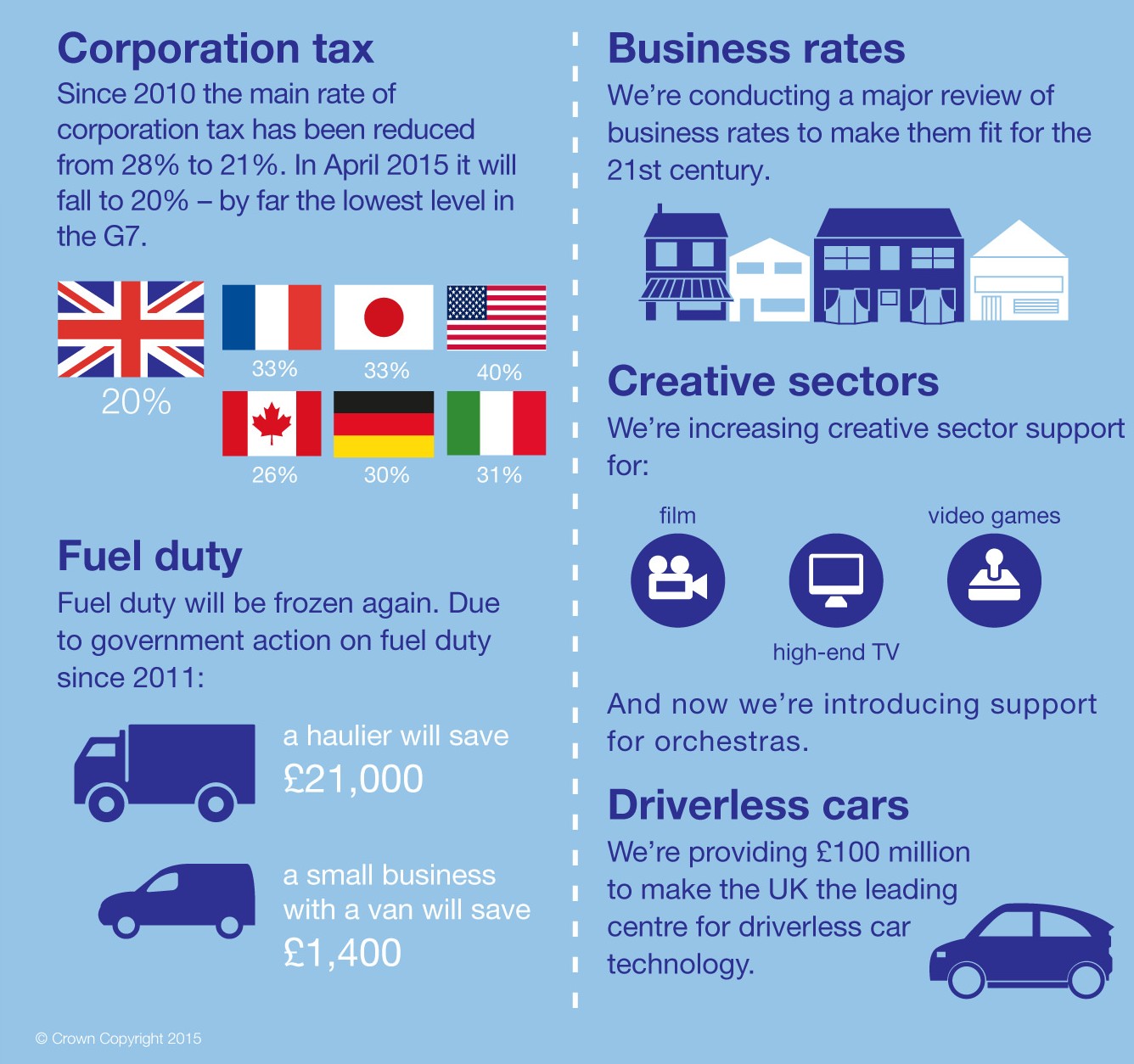 Chancellor George Osborne’s 2015 brought a number of headlines to the automotive industry this time round. With relevant decisions focusing on autonomous car development and fuel duty freezes, this year’s budget went some way to underline the importance of the UK automotive sector to wider economic growth.

In a move that will affect many in the tyre industry – both directly and indirectly – the chancellor also confirmed that he will raise company car tax “more slowly than previously planned”, and particularly will use the tax to encourage taking on ultra low emission vehicles (ULEV) by fleets. However, while “more slowly” sounds positive, Fleet News pointed out that company car drivers will face a three percentage point year-on-year hike in their company car tax from 2019/20.

Perhaps the biggest single figure announced was the £100 million five-year funding programme George Osborne announced for connected and autonomous car development. But it didn’t end there for the UK’s healthy car manufacturing sector. The chancellor also doubled UKTI funding for exporters to China.

Commenting on these points, Mike Hawes, SMMT chief executive, said: “The £100 million injection into connected car research, development and testing – to be matched by industry – will provide a vital boost to the UK automotive industry and put us ahead in the global race to build the cars of the future. It is tremendous news that government has adopted SMMT and industry’s call for this investment – it lays the foundations for the UK to become a centre of excellence in intelligent mobility, and underlines the importance of automotive engineering to the UK economy.

“In addition, we’re pleased that government has recognised the importance of China, which is now the automotive industry’s biggest export market. Sales of British-built cars there have grown seven-fold in the past five years. This funding will help us to further capitalise on this opportunity, and strengthen the significant work SMMT is doing to grow the UK automotive presence in China.”

Something else that George Osborne flagged up in the budget was that the UK government would look at speeding up the rate at which Heavy Goods Vehicles (HGV) driving tests and driver medical assessments currently take place. This means considering options to accelerate this procedure in order to help address the shortage of qualified HGV drivers. This way well received by Justin Zatouroff, at analysts KPMG: “The industry will be pleased that the government is stepping in and recognising the problem and taking action to review driving tests and driver medical assessments speeds. The government working with road haulage firms on an industry-led solution to the driver shortage will also be well received. Looking at the right level of access to, and funding support for, training is good for all but will take time to change a long term problem given the average age of HGV drivers is so high.”

The Chancellor’s rejection at this stage of the RHA’s call to support the cost of getting UK residents licenced and qualified to drive heavy goods vehicles was described as “a poor one for the economy, for tax receipts and for the industry. But we note his commitment to finding an industry-led solution with the right level of funding support and we look forward to further discussions.”

Continuing the measured tone, the RHA added: “We note the continued, freeze on fuel duty which was expected. Had he reduced duty (as he did with alcohol) he would have boosted growth and employment as demonstrated through the independent, RHA-funded, NIESR research.  The continued freeze on HGV vehicle excise duty is an appropriate recognition of the vital role trucks play throughout the economy”.

On the other side of the petrol pumps, petrol retailers spoke of the continued pressure such decisions put on margins: “Independent petrol retailers are struggling to survive as fuel prices and margins shrink, and so the PRA welcomes the government’s pledge in the 2015 Budget to overhaul both the level and methodology applying to business rates”, Brian Madderson, chairman of the Petrol Retailers Association (PRA) commented.

Over 35 per cent of these retailers have now developed symbol brand convenience stores on their forecourts to provide an income stream which supports low margin fuel (70 per cent of the pump price is government tax).

However, the current methodology employed by the Valuation Office Agency (VOA) is to assess forecourt stores for the ratable value on a turnover basis. In direct contrast their competition, local standalone convenience stores often owned by one of the “big four” supermarkets, is assessed on an area basis (ITSA). Thus a forecourt may have up to 4 or 5 times the level of rates to pay for the same business activity.

Madderson continued, “This is clearly an unfair and anti-competitive tax regime which must be tackled by this promised overhaul.

In car retail, the National Franchise Dealers Association (NFDA) highlighted the chancellor’s decision to increase personal tax allowance which will raise the personal income allowance to £11,000 in and will see a rise to £10,500 from April 2015. Employees with an annual salary below this amount are exempt from taxation. The NFDA also welcomed an increase of The National Minimum Wage to 3 per cent for adult workers, as this is the biggest rise in seven years. The rise by 20p an hour to £6.70 will offer more financial security to workers. By 2020 the minimum wage is set to be £8 an hour. The corresponding increase in the minimum wage for apprentices will be offset by the abolition of national insurance. Sue Robinson, NFDA director, welcomed these measure on the basis that they are an investment in the next generation of staff in the sector. In addition, to the abolition of National Insurance for apprentices, the chancellor has confirmed that from April 2015 National Insurance will be abolished for under 21’s – which is a similarly supportive gesture to future market entrants.

And finally, in a detail that is applicable to all businesses, the chancellor confirmed that from 1 April 2015 Corporation tax will be 20 per cent. This will be one of the lowest rates in Europe.

Reports: Pirelli being sold to an Asian partner