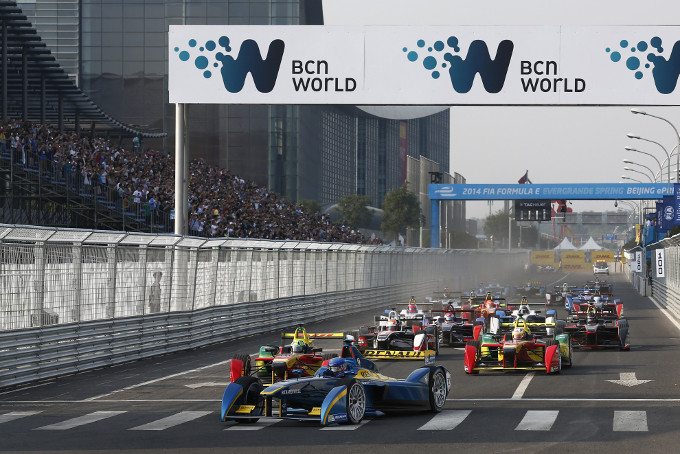 History was made this weekend (14 September) as the world’s first ever fully-electric single-seater race took place in Beijing, marking the successful season opener of the FIA Formula E Championship. The race – Beijing Evergrande Spring ePrix – was held on a spectacular temporary race track built around the city’s iconic Olympic ‘Bird’s Nest’ Stadium and was won by Audi Sport Abt’s Lucas di Grassi.

Some 40 million are believed to have watched the race worldwide on television with 75,000 attending on site and one billion social interactions recorded around the race.

Brazilian di Grassi stole victory after race-leader Nicolas Prost (e.dams-Renault) and Venturi’s Nick Heidfeld touched on the final corner of the final lap in the battle for the lead, sending Heidfeld into a spectacular crash which he walked away from unharmed.

Andretti driver Franck Montagny finished runner-up nearly three seconds adrift of di Grassi with team-mate Daniel Abt crossing the line third, only to later have it taken away from him after failing short of the required 28kw power consumption usage. Virgin Racing’s Sam Bird was eventually promoted to claim the final place on the podium.

Lucas di Grassi said: “Firstly, I’m happy Nick [Heidfeld] is ok and it shows how safe these cars are. I didn’t see what happened myself. The win is like a dream come true. I was lucky to be in the right place at the right time. The team did a great job all through practice and qualifying, yes we made a few mistakes but overall I’m extremely happy to be the first ever winner of a Formula E race.”

Alejandro Agag, CEO of Formula E said: “Two years ago the FIA had a vision of creating a championship which has close racing, entertainment and sustainability at its heart. This weekend, that vision became a reality. To see 20 fully-electric cars racing towards the first corner was a very special moment for me and for everyone involved. We truly believe this weekend marks a new era of motorsport that embraces sustainable mobility and we are incredibly grateful to all our investors, teams, drivers, partners, event operators, personnel, and of course the FIA, for helping us make this such a success. Of course, I’d also like to congratulate Lucas di Grassi on being the first Formula E winner.”

He added: “What is more important to us is that Formula E is the biggest digital race in the world with real racing. We’re proud to announce that during this ePrix we’ve had a live worldwide television audience of 40 million, 75,000 people on site and more than one billion social interactions.”

Formula E is the FIA’s new fully-electric single-seater championship designed to appeal to a new generation of motorsport fans. Competing entirely on city-centre circuits all over the world, it uses cars capable of speeds in excess of 150mph (225kph). Its 10 teams feature some of the leading international names in motorsport including Alain Prost and Michael Andretti, along with high-profile environmental supporters including Sir Richard Branson. Meanwhile, it’s driver-line up boasts an array of former Formula One stars such as Jarno Trulli, Jaime Alguersuari, Sebastien Buemi, Lucas di Grassi and Bruno Senna – nephew of the great Aryton. Organisers hope the new series will also help increase the interest in electric vehicles and promote sustainability, as well as accelerate the technology available which, over time, will filter into the road-going electric vehicle market.

Round two of the new Formula E series takes place in Putrajaya, Malaysia, on November 22 2014.