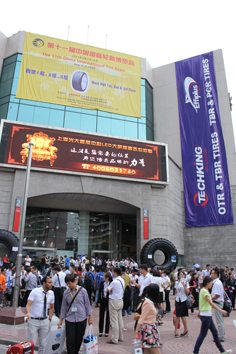 This year's CITExpo is aiming to set new records

When the twelfth China International Tire Expo (CITExpo) kicks off on 10, 11 and 12 September 2014 the organiser (Reliable International Exhibition Services Co, Ltd.) hopes to be able to claim the title of “largest Far Eastern tyre trade show”. And in order to do this the company is increasing available floor space by some 20 per cent.

In practice this means booking an additional hall at the Shanghai Everbright Convention and Exhibition Centre and also doing the work necessary to fill it. The new hall (referred to as “hall D”), joins the original three halls (halls 1-3) and brings total exhibition space to 28,000 square meters this year. The company reports that over 400 quality international and domestic exhibitors will occupy, which is a 20 per cent increase from the last year figures. This means the firm is all set to fill the newly expanded area – demonstrating a considerable growth rather. Key exhibitors in occupying space in the four full halls include well known domestic and international brand names such as Cooper, Apollo, Double Coin, YHI, Stamford, Techking, Guizhou, Triangle. According to the company, in addition “many domestic and foreign manufacturers and suppliers in the tyre related industry, including tyres, tubes, wheels, tyre and wheel maintenance equipment, tyre accessories, tyre production products etc, will showcase their latest products and services to the buyers coming from over 100 countries worldwide.”

Despite the fact that there we are still roughly two months away from the show’s opening, the number of booked stands and floor space is already said to have hit record levels. Indeed this year the company expects achieve its highest exhibitor numbers and floor space totals in the 11 year history of the show. Furthermore the show organisers report that “it is encouraging to achieve the fact that CITExpo has been growing every year in the past eleven years since its first show launched in 2003, along with the fact that there have been a few global economy crises happening in the past decade.”

Their hope is that the show could become one of the most attended show in the worldwide tyre industry not only because it is held in the largest tyre production and consumption market in China, but also because the highly internationalized buyers of this show are of high quality and quantity that has been exceeding the exhibitors’ expectation. However in order for CITExpo to achieve the truly global goal it desires there will need to be a greater emphasis on the country’s, and the world’s largest tyre manufacturers, something Tyres & Accessories’ journalists are interested in experiencing first hand at this year’s show. Even without them the show will no-doubt continue growing in size, but will at some point hit a glass ceiling when it comes to the prestige attached to the event.

That said, the fact that the show is already one of (if not the) longest running tyre exhibition in China, not to mention one of the fastest growing, stands it in good stead for achieving its global goals. Indeed it of the increasing number of similar events in China (there are already roughly five annual events seeking CITexpo style size and status) there is probably only one that is even comparable either in size or longevity and that show arguably has the opposite challenges of those that are facing CITExpo in its bid for truly global significance and success. In any case the continued buoyant interest in CITExpo is ably demonstrated by one more statistic. According to Reliable, CITExpo 2014 already has the largest number of pre-registered visitors in its history, which of course represents another increase on last year’s show.

Moreover, the event organizer will continue to bring one of the most famous events in the automobile manufacturing industry into the country from Germany: Automotive Testing Expo. Automotive Testing Expo will be held in the week immediately after CITExpo and continues to draw crowds and interest. Once again, the fact that this show now runs separately (for a number of years this and CITExpo ran in parallel covering different halls at the same exhibition) demonstrates the kind of progress that has taken place at this international tyre event.