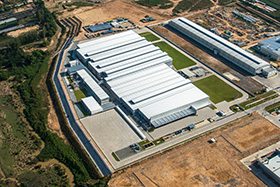 Aerial view of the new factory

A total of approximately THB 4 billion (£73.4 million) has been invested in the new 130,000 square metre plant project. The facility manufactures tyres and rubber crawlers for agricultural equipment and solid tyres for forklifts. Production began in April and is expected to reach a monthly capacity of around 800 tonnes, or 50,000 tyres, by the end of 2017.

During his opening ceremony speech, Ikuji Ikeda expressed his hopes for the new factory: “As part of our long-term Vision 2020, the Sumitomo Rubber Group has designated ‘expansion into Asia with tyres for agricultural machinery’ as an important growth engine toward the accomplishment of our group’s goals. It is our hope that, with this factory producing a great number of high-quality agricultural equipment tyres, our group will be able to contribute to agricultural development in Thailand and, by extension, also play a part in eliminating world hunger.”

Rising global food requirements is driving increasing demand for agricultural tyres in Thailand, the country likely to be the world’s number one rice exporter in 2014, with exports expected to reach 9 million tonnes. Sumitomo Rubber says its aim with the new factory is to enhance its ability to supply tyres for agricultural equipment in the growing Thai market while also taking a major step toward further expanding its overall agricultural equipment tyre business.