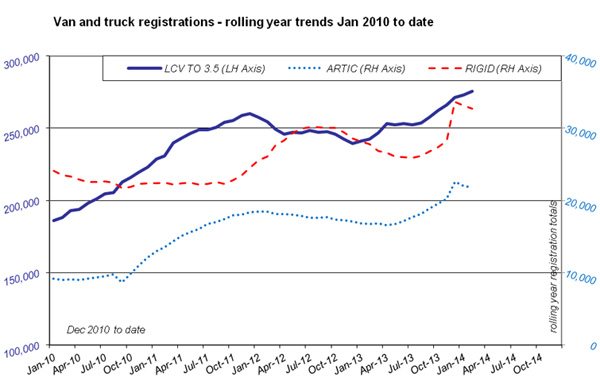 Yesterday the Society of Motor Manufacturers & Traders released its commercial vehicle market registration figures for February 2014, commenting that growth during the month was powered by strength in the van segment. Total commercial vehicle registrations in the UK grew 17.5 per cent in February to 13,320, rolling 15.1 per cent year up to 330,283. A 28.2 per cent year-on-year rise in van registrations to 11,731 registrations boosted the rolling 12 months by 13.8 per cent. The Euro-6-induced dip in truck volumes continued in February but the rate of decline slowed from January’s 37 per cent drop. The 12 months to February remained 22.4 per cent higher.

“Growing van registrations supported the February vehicle market as middle and heavy-weight vans enjoyed healthy rises, reflecting improving economic activity,” said SMMT chief executive Mike Hawes. “Registrations of trucks over six tonnes continued to decline as the market adjusts to new Euro-6 legislation. We anticipate this rebalancing act to be a factor for some months yet, while van volumes should remain on an upward trend.”

Clever tyres – how tyres, TPMS and RFID are combining