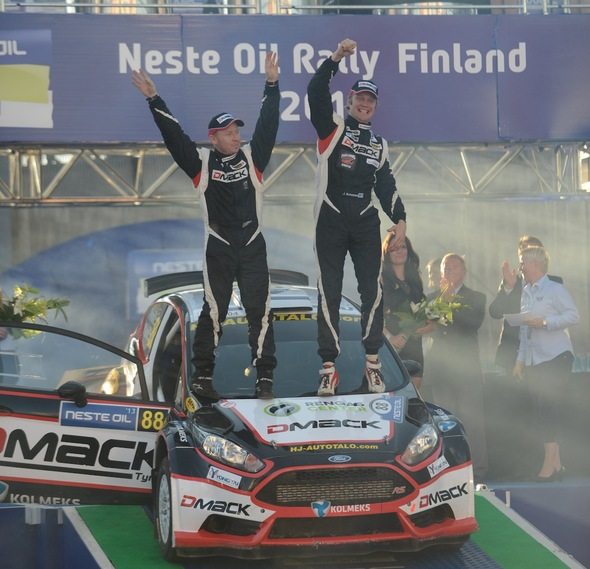 Dmack is hoping to help four Ford Fiesta R5 drivers challenge for WRC2 honours at the revived Wales Rally GB round of the FIA World Rally Championship. Jari Ketomaa used the DMG+2 gravel tyre at Rally Finland in August to drive to victory, and he will challenge again when the championship kicks off on Thursday in North Wales. Norwegian Eyvind Brynildsen will join him, driving a pair of Autotek-run Fiesta R5s in Dmack livery. Two local British drivers will also use Dmack in attempting to make home advantage count in the north and mid-Wales forests.

Triple British Rally Champion Mark Higgins returns to tackle his home event after a five-year break. The 42-year-old resident of mid-Wales boasts an impressive set of results from Rally GB and finished sixth overall and top privateer driver in 2002. Higgins, a professional rally coach and stunt driver on the last two James Bond movies, has been attracted back to the event due to its revised location and format – which now takes in a host of refreshed, demanding gravel stages.

British Rally front-runner 21-year-old Tom Cave completes the fab four. From Aberdovery in mid-Wales, this is Cave’s fifth attempt at his home event and last year he finished second in the SWRC category. He revealed that the event represents a number of firsts for him: “the first time in an R5 car, the first time running with MSL MotorSport and the first time on Dmack tyres.”

With its traditional position at the end of the rally season, Rally GB is renowned for its slippery, muddy forest roads mixed with wet, cold and sometimes foggy weather. Dmack tyres have their strongest history in these cool conditions: in 2011 Ott Tanak scored a top-three WRC stage-time on this event and in 2012 Dmack claimed its first-ever fastest overall time on a muddy stage at Rally de Espana.

An evolution of that tyre has been nominated for next week’s showdown. The new S6 soft compound DMG+2 gravel tyre was introduced in August and immediately set a series of fastest times to seal WRC2 victory at Rally Finland. If the stages are dry and the weather warms up next week, then competitors can choose to switch to the medium S3 compound. A maximum of 24 tyres are permitted for the event.

Dick Cormack, DMACK motorsport director, said: “The new-look Wales Rally GB is hotly anticipated and has attracted some top-class British drivers. Dmack has a strong driver line-up for the championship finale and we’re confident that the nominated S6 tyre will be perfect for the traditionally wet conditions. Our aim is to score another WRC2 victory and prove how well-suited the Dmack range is to competitors in this category.”

No ‘buyer’s remorse’ – court rules Apollo not in breach of agreemen...