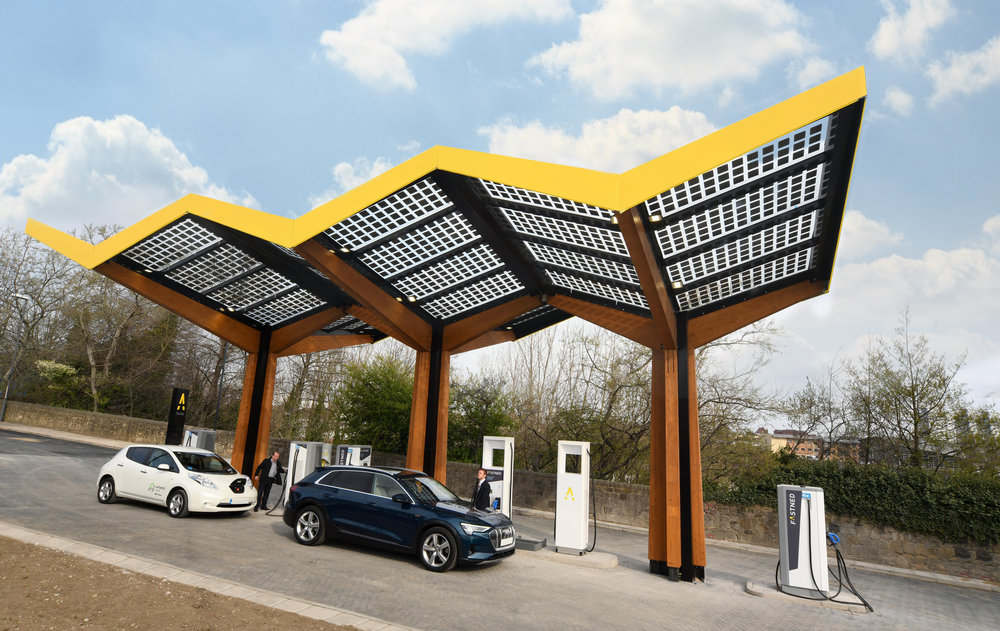 Fastned has opened its first fast charging station in the United Kingdom.

Fastned’s mission is to give freedom to electric drivers and thereby accelerate the transition to electric mobility. Fastned currently has over 90 stations in the Netherlands, Germany and the United Kingdom. Fastned is also expanding to Belgium, Switzerland and France.

The new fast charging station is designed, built, and operated by Fastned and is owned by the North East Joint Transport Committee and funded through the Go Ultra Low Cities Grant and the European Regional Development Fund. The station is centrally located on West Wear Street, which is one of Sunderland’s busiest central routes. Last month Fastned announced it had won another tender for five locations for fast-charging stations in the North East of England, organised by the North East Joined Transport Committee.

Michiel Langezaal, co-founder and CEO of Fastned: “We are pleased to have built this fast charging station where FEV’s can charge up to 350 kW in the United Kingdom in cooperation with the North East Joint Transport Committee. Local and regional electric drivers can now use this charging facility. Sunderland is a symbolic city for electric driving, since the factory where the Nissan Leaf is produced is located here. With the Leaf, Nissan was one of the first manufacturers to launch an affordable, mass-produced electric car.”

Councillor Martin Gannon, Chair of the North East Transport Committee, said: “This is a tremendous asset for the North East. With another fast charging station under construction and five more smaller stations planned, we are making it easier for motorists who already drive electric vehicles and those who want to go green and make the switch to a more sustainable form of transport.”

Councillor Graeme Miller, Leader of Sunderland City Council: “As host to the UK’s first purpose-built high-power fast charging station, Sunderland continues to lead the way in the electromobility industry. Along with other private and public charge-point developments currently underway, these rapid charging stations will help further establish the North East of England as a leader in electric mobility. And it’s also very good news for the electric drivers in this region. The stations can provide electric freedom and ease of travelling for local commuters, commercial fleets, and travellers passing through the region.”

At Fastned, all full electric cars can fast charge. The station canopy is covered with solar panels. All electricity supplied to drivers comes from the sun and wind. The station has four 50 kW fast chargers and two 175 kW fast chargers that are already enabled for 350 kW charging. Initially, charging at the station in Sunderland will be free. The free charging will end during 2019 as soon as the payment system is activated, from that moment an introductory price will be charged. Charging and paying will then be possible with a EV charge card, debit/credit card, Apple Pay and Android Pay. Later in the year it will also be possible to charge with the Fastned App, making automatic charging (Autocharge) possible in the United Kingdom for the first time.