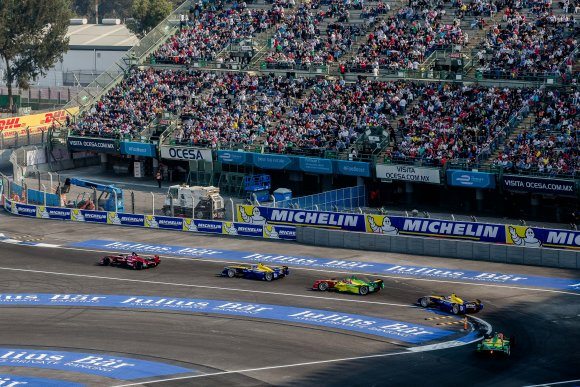 The Mexico City ePrix saw the Michelin Pilot Sport EV face a very different challenge of competing around a permanent circuit, instead of at a temporary city-centre facility, as has been the case since the inaugural Formula E race in Beijing, in September 2014.

Previous venues have ranged from street tracks to public parks (as in London) and airfield runways (Berlin), but Mexico City chose the Autodromo Hermanos Rodriguez and in the infield of a baseball stadium to stage its round of the FIA Formula E Championship.

Although the competition’s all-electric cars and their Michelin tyres have been tested previously at conventional tracks like Donington, England, and Issoire, France, purpose-built circuits are very different to street circuits, notably in terms of the grip they provide, as well as the abrasiveness and dirtiness of the surface. For example, the exhaust fumes of ordinary traffic leave grimy deposits on city streets, which are also covered in painted road signs, or crossed by tramlines. Permanent tracks have other hallmark characteristics.

“Until now, Formula E has tended to race along streets where thousands upon thousands of vehicles are driven every day,” notes Serge Grisin, manager of Michelin’s Formula E programme. “In Mexico City, we were faced with an initially ‘green’, partially soiled track which took some time before it delivered maximum grip. Also, the temperature was initially quite cool in the morning before climbing very quickly. There were steady improvements in lap times as the surface started to rubber up during the free practice sessions.”

For example, Sébastien Buemi (Renault-e.dams) topped the timesheets in the two free practice sessions and improved his times by more than three seconds between mid-morning and the end of Free Practice 1 to set the benchmark at 1m3.341s. The other drivers improved to varying degrees, too, to illustrate the evolving conditions.

As lap times tumbled, any lingering doubts concerning the tyres’ ability to deliver around a race track were soon dissipated. “This was effectively unknown territory for us because we needed to take account changes in grip in places, as well as changes in the type of asphalt,” added Serge Grisin. “We were confident, though, thanks on the one hand to Michelin Motorsport’s experience of circuit racing and, on the other, because of the versatility the Michelin Pilot Sport EV has shown in the Formula E Championship to date. It performed impeccably in Mexico City and the way it evolved matched our predictions. Today, I think we can say that whatever the weather or surface type, the Michelin Pilot Sport EV is a match for all types of conditions, with no detriment to either wear or performance.”

The next round of the 2015/2016 FIA Formula E Championship will take teams to Long Beach, California, USA, on April 2, ahead of the inaugural ePrix in Paris, France, on April 23.