Medium-sized businesses get a raw deal from UK tax system 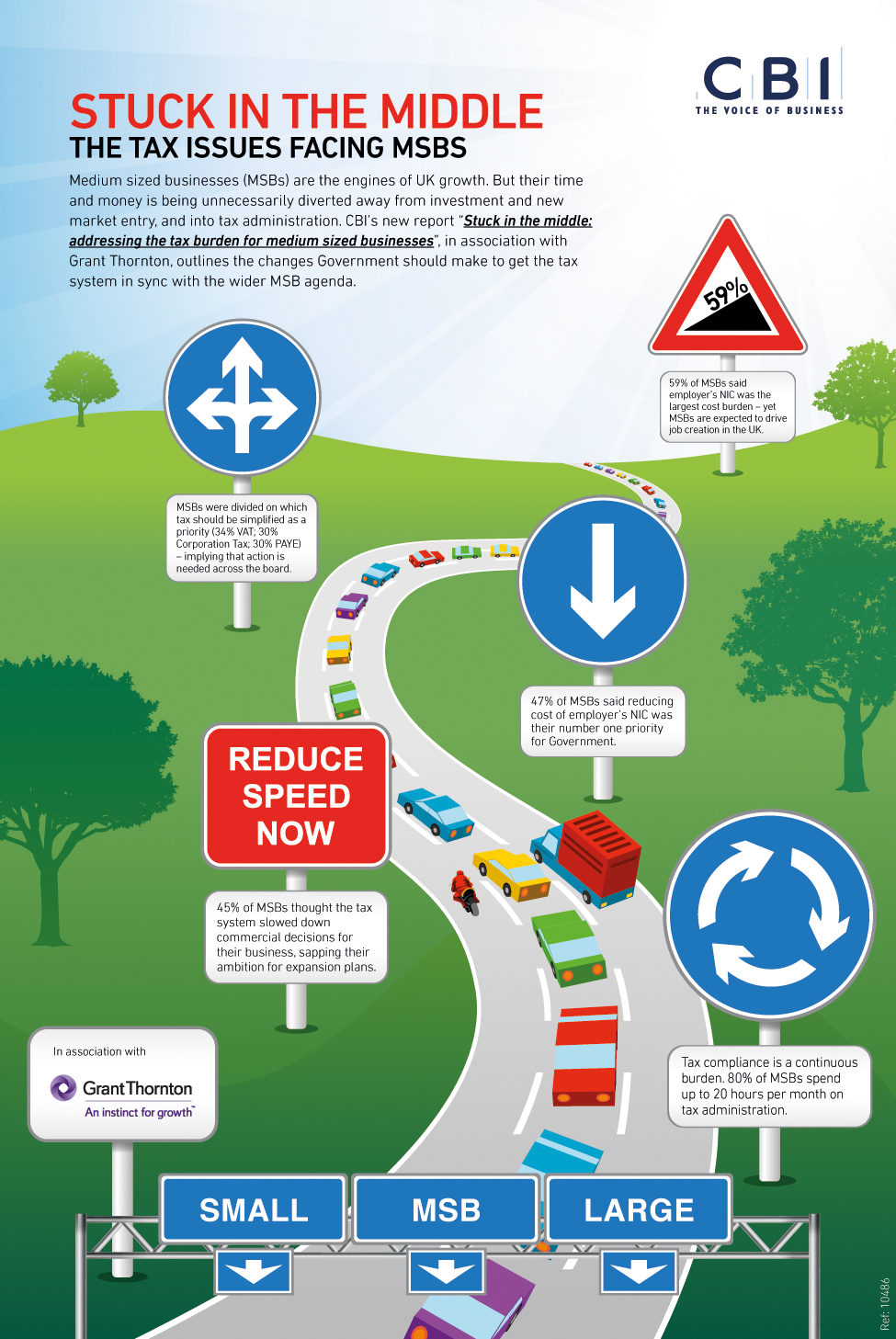 Economic growth and job creation are being held back by a UK tax system the particularly hinders medium-sized businesses (MSB). A new report published by the CBI and Gran Thornton (“Stuck in the middle”) suggest that the tax system is acting as a brake on growth by disrupting cash flow, absorbing management time and dampening export ambitions. Therefore the CBI and Grant Thornton are calling on the Government to make a number of changes to the tax system, including to improve cash flow, widen access to R&D tax relief and to make it easier for MSBs to export.

Specifically they are calling on the powers to that be to: Raise the threshold for the Quarterly Instalment Payments system from £1.5m to £5m. Under the current tax system, when a business’ annual taxable profits reach £1.5 million it has to pay tax up front on a quarterly basis instead of annually. Many MSBs are caught by these rules even though they don’t have the cash reserves to manage them, diverting their finances away from investment.

Change the SME R&D tax relief to allow all growing businesses to benefit as long as they do not have a controlling investment stake from a larger company. Equity finance is an important alternative finance product for MSBs to be able to access, but growing firms are sometimes deterred from using it. Under the current tax rules if a business is more than 25 per cent owned by another company, despite not being a controlling stake, they do not qualify for the SME R&D relief so the government should raise this level to 50 per cent.

Raise the threshold for exemption from transfer pricing rules from firms with less than 250 employees to firms with up to 500 employees. We should be encouraging MSBs to break into new markets to export their goods and services abroad but as businesses become more established in overseas jurisdictions, the tax burden increases, particularly transfer pricing requirements.

Roll out HMRC proposals to provide a designated named HMRC official to the largest MSBs, on a demand basis, as soon as possible and in the meantime improve digital communications through emails and live chats. According to Grant Thornton research, 45 per cent of MSBs said tax was a factor in slowing down their commercial decision making, while half of respondents (51%) said they spend ten hours a month (120 hours per year) on tax management. In particular, MSBs report difficulties in getting through to HMRC on the phone and then finding the correct person to deal with their request.

John Cridland, CBI Director-General, said: “Medium-sized businesses have the most potential to drive business growth and job creation. But all too often their resources, management time and ambitions are being sapped by a tax system which disproportionately hits firms of this size. We need our growing businesses to invest, innovate and break into new markets to secure the long-term health of our economy. The UK’s tax system should support these entrepreneurs to do this but in many cases it is actually working against them.

“Medium-sized firms are not able to benefit from the incentives that small firms do and at the same time most cannot afford to have an army of tax consultants on speed dial to help them wade through the complexities of the system.”

Jonathan Riley, Grant Thornton UK LLP, National Head of Tax, said: “[Medium sized businesses] face particular challenges in coping with tax law. They are not so large that they can self-resource the skills needed to resolve complex tax legislation, or to have the dedicated support that the HMRC CRM affords; neither are they so small that many of the complexities highlighted in this report are not relevant to them. The MSB community often struggle to find a voice, yet when asked they have a lot to say, with tax complexity regularly cited as a major barrier to their growth.