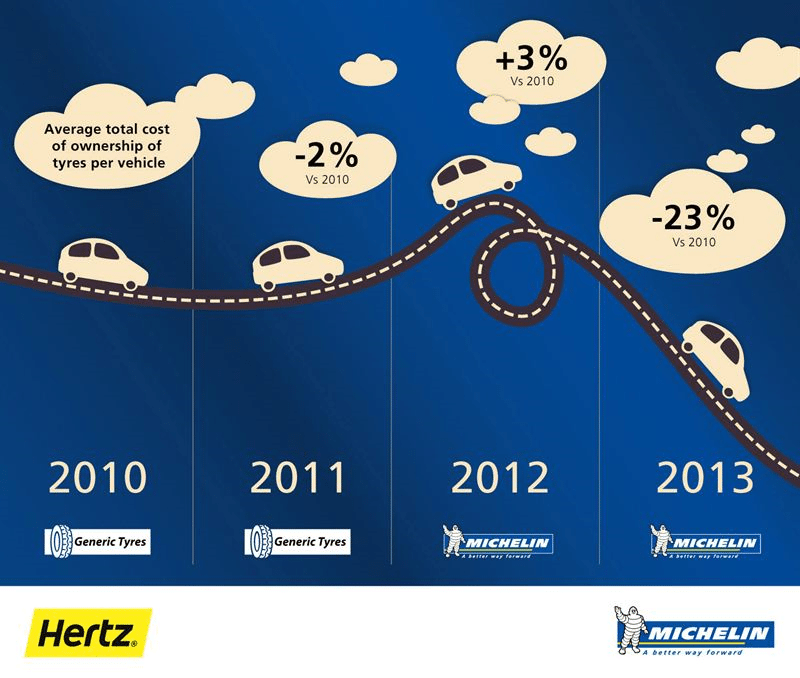 Car rental company Hertz UK has recorded a 23 per cent drop in its average tyre spend per vehicle, two years after adopting a Michelin tyre policy. Latest figures show the average total cost of ownership of tyres per vehicle has dropped by almost a quarter since 2010.

Hertz UK’s General Manager Neil Cunningham attributes the considerable reduction in average cost per vehicle to the longevity and durability of Michelin tyres which has meant that fewer replacements are needed.

He said that the saving was particularly important as over the same time period the size of Hertz UK’s fleet increased significantly. In addition Hertz’s customers renting any vehicle on its fleet benefit from the improved performance on the road provided by Michelin premium tyres.

“Our business has been growing at a substantial rate year-on-year both in terms of the number of vehicles we have on fleet, and the number of individual rentals our customers have made. Yet at the same time our average cost of tyres per car has come right down because the tyres we buy last so much longer.”

He added: “We were also very impressed with the safety track record of Michelin tyres, and that the company shares in our sustainability values.”

Michelin’s Key Account Manager for Hertz UK, Peter Wood, said: “We are delighted that Hertz UK have been able to record such strong results in a relatively short period of time.

“As a company we are very proud of the research and technology that goes into our tyres, and it’s really rewarding to see this brought to life for our customers when their bills are reduced.” pg