You are here: Home1 / News2 / Product News3 / Then there were four – staying mobile minus the spare

Then there were four – staying mobile minus the spare 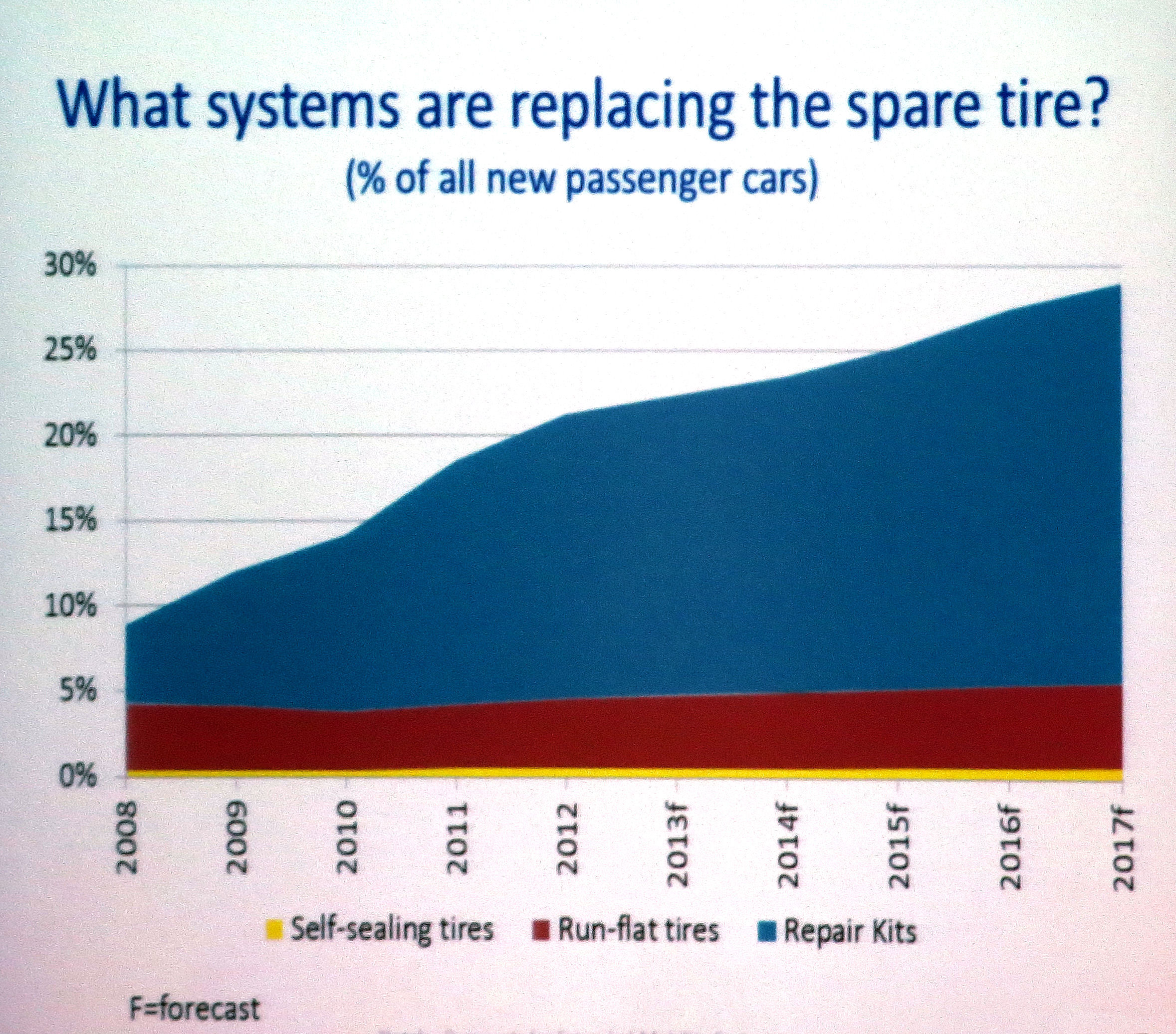 If you’ve needed to change a tyre lately, you may have been confronted by a space saver in the boot – or no spare tyre at all. Pressure to reduce vehicle weight, combined with increasing tyre reliability and a growing reluctance (or inability) amongst motorists to actually change a flat tyre, has seen the number of new cars equipped with a full-size spare fall dramatically in the past few years. Previewing a new market research report during last month’s Tire Technology Expo conference, Notch Consulting Inc president Paul Ita noted that while 68 per cent of cars produced in 2008 came with full-size spares, this number had slid to 48 per cent four years later, and he projects that by 2017 only 41 per cent of new cars will still be sold with a full-size spare.

These statistics introduced the topic of Notch Consulting’s new research report, titled ‘Prospects for Extended Mobility Systems: Run-Flats, Tire Repair Kits and Self-Sealing Tires’ and due for release in March 2014; the report and Ita’s conference presentation cover the alternatives to the traditional spare, their respective market presence and where Notch Consulting believes the market is trending.

“In number terms, we’ll be down to about 30 million full-size spares in 2017,” Ita shares. “As you look forward this number will remain relatively flat at about 30 million units but the percentage will decrease as tyre production is increasing, based on a forecast that global car production will reach 74 million units as of 2017.” Ita also foresees a limited future for what is now the most prevalent full-size spare substitute, the space saver tyre. He notes that while its adoption rose from 23 per cent in 2008 to 31 per cent four years later, the space saver is now topping out as it possesses similar drawbacks, albeit to a lesser extent, as its full-size counterpart.

So if weight and space pressures, not to mention motorist habits, are putting the squeeze on the spare, what about the main substitutes available to tyre and vehicle manufacturers? At present, motorists setting out without a spare and not wishing to risk being stranded can put their trust in one of three systems – run-flat tyres, self-sealing tyres or tyre repair kits.

The run-flat is arguably the best-known spare tyre alternative, even though only a fraction of the 21 per cent of cars sold without a spare in 2012 were fitted with these. Ita describes the market for run-flats as small but fairly steady and increasing in market share, rising from around four per cent in 2008 to an estimated five per cent in 2017. The run-flat has been with us for almost two decades now, being first introduced as original equipment on the Corvette in 1997, two years before BMW first fitted run-flats on its 7-Series. The self-supporting SSR variant now dominates the run-flat market and accounted for the vast majority of the estimated 13.5 million run-flat shipments in 2013.

But while run-flat shipments enjoyed a compound annual growth rate (CAGR) of 34 per cent between 2002 and 2012 and a CAGR of around six per cent in the downturn years of 2008 to 2012, and Notch believes new Mercedes fitments plus BMW and Mini’s continued use of the technology will drive a CAGR of 8.5 per cent between 2012 and 2017 (with 18.5 million units shipped that year), Ita points out that not all vehicles are a good match for run-flats. “SSR is most appropriate for low aspect ratio tyres, such as UHP and UUHP. Attempts to move run-flats into family vehicles such as minivans have not been successful.” In addition, run-flats continue to be held back by a purchase price around 30 per cent above a comparable standard tyre while delivering a shorter service life and increasing fuel consumption by one to two per cent.

Run-flat tyres’ limited utility for family and micro cars leave the field open for another alternative, the tyre repair kit. These OE-supplied pump and repair material kits are suited for sealing punctures up to 6.35 millimetres in diameter and offer 200 kilometres of post-repair driving. Tyre repair kits have been supplied to OEM customers for 20 years now but greatly rose in popularity in 2009/10 – “Perhaps due to realisation that run-flats weren’t going to be a solution for economy cars and another solution had to be found,” Ita comments. He adds that tyre repair kits are a “natural fit” for economy cars, especially micro cars and hybrid-electric cars, where there really isn’t room for a spare. Shipments of these inexpensive kits (Ita shares that prices range from 13 to 27 euros) rose from around 200,000 units in 2002 to approximately 1.5 million five years later and 10.5 million in 2012 – a CAGR of around 50 per cent between 2002 and 2012. The Volkswagen Group is the largest single customer and accounts for 18 per cent of all original equipment tyre repair kit fitments. In terms of regional demand, the EU region took 50 per cent of all OE-supplied kits in 2012. Notch Consulting forecasts that original equipment fitments of tyre repair kits will rise to 17.3 million units in 2017, a CAGR of about ten per cent. “Going forward the growth rate will be a bit slower, I believe many of the easy conversions have already been done, the new growth will come in the sub-compact, city car and hybrid markets,” Ita adds.

Ita opines that tyre repair kits offer the greatest growth potential from the three spare tyre alternatives covered by the Notch Consulting report, despite current levels of motorist unfamiliarity with how they function. As for the third and by far least-used alternative, self-sealing tyres, Ita anticipates that original equipment demand will rise from 1.5 million units in 2012 to around 2 million units in 2017. About 390,000 vehicles were fitted with self-sealing tyres as original equipment in 2012 – about 95 per cent of these were Volkswagens, which uses the technology for two European models, and Hyundai accounted for most of the remainder. Continental’s ContiSeal is the dominant self-sealing technology and makes up about 90 per cent of the market. ContiSeal can be applied to any tyre post-production in any size, with application carried out in plants in the Czech Republic and Portugal. The ContiSeal layer of viscous rubber can instantly seal punctured up to 6 millimetres in diameter and adds about half a kilogramme to a tyre’s weight, but Continental says this has no discernible affect on rolling resistance.