You are here: Home1 / Goodyear: Protect our good name – Bad year for the White House t...

Don’t buy GOODYEAR TIRES – They announced a BAN ON MAGA HATS. Get better tires for far less! (This is what the Radical Left Democrats do. Two can play the same game, and we have to start playing it now!). 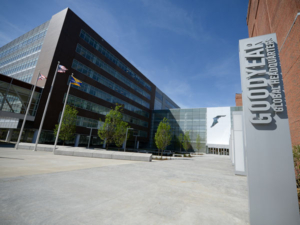 No nasty trick is off limits in the run-up to the US presidential election. With his call to boycott Goodyear,  President Trump has disavowed and repudiated the corporate culture nurtured by the tyre maker over decades. A culture distilled into a concise slogan, ‘Protect Our Good Name’. These four words guide the actions of Goodyear employees worldwide and can be seen in their interactions with customers, suppliers and the general public, in their strict adherence to laws and honest business practices. The group followed these rules long before most companies even talked about corporate governance or diversity. But some interpret rules any way they like, dismissing facts as fake news and packaging untruths as ‘alternative facts’.

The plant manager at a Goodyear facility in Kansas wanted to provide clarity within an in-house presentation and produced a visual explaining that movements such as Black Lives Matter and Pride can be advocated under the umbrella of the Goodyear Group as they  respectively stand against racism and gender discrimination. Racism and LGBT stigmatisation are problems of a general social nature that decency demands we confront. The visual also clarified that statements in support of political or partisan campaigns aren’t welcome within the factory or during work hours, as their presence may jeopardise the company’s industrial peace. 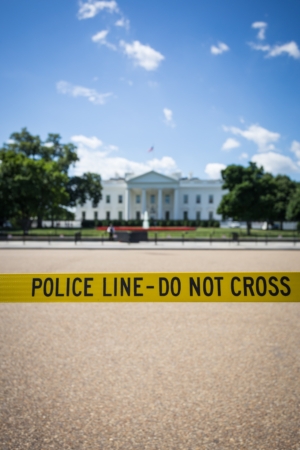 (Photo by Jacob Morch from Pexels)

At Goodyear, this latter category includes a workplace ban on MAGA baseball caps and signs bearing slogans such as Blue Lives Matter. It goes without saying that every life counts, and it can’t be denied that the job of a uniformed police officer is sometimes a dangerous one. But as we’ve seen in recent months, their reputation is not beyond reproach.  They grip hard, sometimes too hard, and the pistol is always within easy reach. Black people die more frequently than whites during police operations, even though in many cases officers claim shooting in self defence. Black parents even tell their small children to always stretch their arms and hands visibly forwards during a police check even if not asked to do so in order to nip in the bud any occurrence of possible ‘misunderstandings’ or ‘self-defence situations’.

When adrenaline and anxiety rises amongst police officers, they can certainly feel threatened and gain the impression that they’re responding in self-defence, which can lead to the use of their service weapon. But police forces in the USA don’t have a particularly good reputation. Applicants undertake a six-month ‘apprenticeship’ before entering service. Many new recruits are former soldiers  more used to receiving orders for action than de-escalating a situation. If something goes horribly wrong, those seeking answers come up against the known and feared ‘blue wall of silence’. The officers standing alongside see nothing and report nothing. This twisted esprit de corps exists in various manifestations and forms all over the world.

The extent to which Black Lives Matter highlights the problem of racism can be seen in a video shared by numerous media outlets. A young white man stood at an intersection in the small town of Harrison, Arkansas, holding a Black Lives Matter sign. The response from passing motorists was shocking. America is not a racist country, but there’s no shortage of racists nonetheless.

But it was Goodyear’s decision to prohibit the wearing of MAGA caps on company premises that pushed Mr Trump over the edge, and some consider his boycott correct. Anonymous commentators have swamped internet forums to rail against Goodyear’s separation of workplace and politics and to demand the plant manager’s sacking.

Such commotion over campaign baseball caps seems ridiculous here on our side of the Atlantic. But this is simply the way things are in that polarised country. You don’t have to spend much time watching television or browsing the news before hearing Trump described as incompetent, a compulsive liar and a psychopath. On top of accusations of narcissism, he’s also been been called – thanks to former chief strategist Steve Bannon’s far-right connections – a nazicist.

Trump may appear childish, vulgar, sneaky, incompetent, stupid, tasteless and dangerous. But that doesn’t mean his supporters lack grey matter. Even amongst the intellectual elite there are admirers who consider him a great man. A great man who, during a televised White House press conference, was asked by an accredited journalist which of his many lies he regretted most.

The coronavirus pandemic is currently pinning Trump against the wall, so even the most absurd diversionary manoeuvre comes in handy. A broadside salvo against Goodyear. Boycott! A company is persecuted and demonised for bringing its corporate governance and diversity policies to life in an exemplary manner. Whatever will Trump come up with next? It is only a few short weeks since the President denounced vehicle imports as a threat to national security. Now he’s turned 180 degrees and attacked his country’s largest tyre company. No re-election without MAGA caps? According to rumours, the entire Chinese Linglong workforce is already running about wearing red baseball caps in the hope of landing US government contracts. Their tyres are at any rate cheaper than Goodyear’s.  klaus.haddenbrock@reifenpresse.de/sg

Goodyear has been forced to release an official response after US President Donald Trump urged motorists not to buy its tyres in a social media message. On 19 August, the President rebuked Goodyear in an apparent critique of its “One Team” equality policies, saying: “Don’t buy GOODYEAR TIRES – They announced a BAN ON MAGA HATS”. He further suggests that motorists could “Get better tires for far less!” – pointedly undermining the company’s premium brand positioning and performance without reference to any tyre performance or price data. 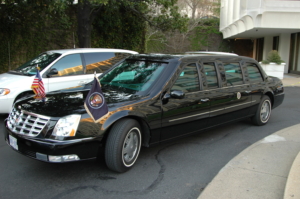 Trump, the presidential limo and its tyres

It is an open secret that the US presidential limo, affectionately known as “the beast” runs on Goodyear tyres. What many people are less aware of is that – owing to the fact that “the beast” has significant amounts of armour plating – unlike most limousines, the US presidential limo is actually fitted with 19.5-inch truck tyres that are better suited to the vehicle’s increased load. Whatever the fitment, 24 hours after Donald Trump tweeted “Don’t buy GOODYEAR TIRES”, adding: “Get better tires for far less!”, one has to ask if the current incumbent of the White House will be taking his own advice. 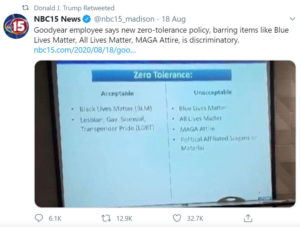 Titan to Trump: We’re not the Goodyear you want to avoid

In order to prevent damage from ‘friendly fire’, Titan International Inc. has issued a statement distancing itself from the spat between US President Donald Trump and the Goodyear Tire & Rubber Company. Titan wants to make it clear that there is absolutely no link between it and the alleged Goodyear diversity training document that’s circulating on the internet.