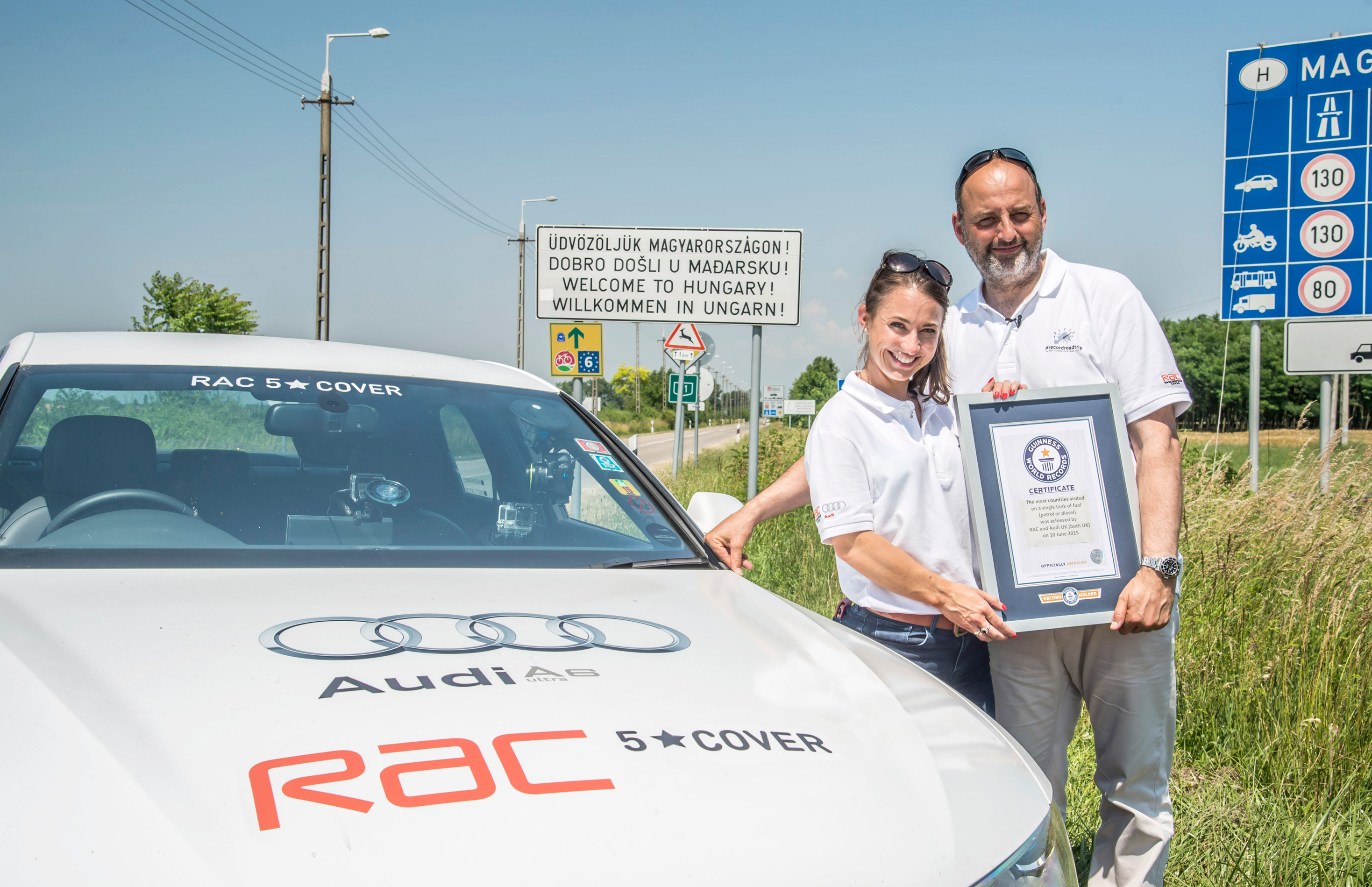 Record-breaking A6 ultra drives to 14 countries on one tank

Audi and the RAC have officially set a new Guinness World Records title by driving to 14 countries on a single tank of fuel. The unmodified Audi A6 TDI ultra chosen for the challenge comfortably exceeded its official 67mpg-plus potential by averaging a remarkable 75.9mpg and completing a total of 1158.9 miles without the need for a fuel-stop. Motoring journalist Andrew Frankel and racing driver Rebecca Jackson drove the A6 TDI ultra almost non-stop for nearly 28 hours from the Netherlands to Hungary, passing through Belgium, Luxembourg, France, Switzerland, Lichtenstein, Austria, Germany, Italy, Slovenia, Croatia, Bosnia and Serbia – 14 countries in all.

Commenting on the new record, Jon Zammett, head of Audi UK Public Relations, said: “By covering so much of Europe on a single fill-up, we have proven that real-world economy of almost 76 mpg or more can be had from the latest engine technology. The Audi A6 TDI ultra has proven the range capability of one of the world’s most advanced executive cars.”

Both drivers faced numerous challenges in their 28-hour driving adventure including diversions for both heavy traffic due to an accident and a closed tunnel which led to an unplanned mountain detour.

Andrew Frankel, car reviewer, said: “I’m delighted to be part of the team that has set this record and would like to think it will stand for some time as we eked out every last mile from the A6’s tank. From an endurance point of view the challenge actually proved to be far harder than both Rebecca and I imagined it would be.

“Despite sharing the driving we were on the road almost continuously for 28 hours, focussed on maintaining an average speed of around 50mph. In order to do this you have to be fully aware of what’s going on around you and anticipate what could happen with the traffic ahead. While it was normal driving in one sense, it was also a very different type of driving, but nevertheless demanding.”

Racing driver Rebecca Jackson added: “I feel Andrew and I have helped the RAC and Audi set a record to be proud of. I’m known for driving pretty fast, but this challenge was naturally more about maintaining a constant, fuel-efficient speed and not being caught out by vehicles which would cause us to slow down and then accelerate to the optimum speed again. This was an amazing event and a very different long-distance driving challenge to what I’m doing next year when I compete in the 24 Hours of Le Mans 2016.”

As the efficiency champion of the A6 range, the Audi A6 TDI ultra represents the pinnacle of the Vorsprung durch Technik brand’s absolute focus on maximisation of efficiency for extraordinary fuel economy and emissions, underpinned by a refusal to compromise on the hallmarks that define an Audi. The ‘ultra’ badge is also reserved for the most frugal A3, A4, A5, A7 Sportback and TT models, all of which are available to order now.