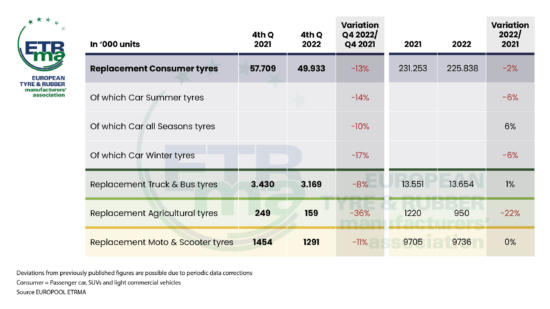 A positive first half of 2022 gave way to an increasingly bleak picture for replacement tyre sales according to overall figures published today by European Tyre and Rubber Manufacturers’ Association (ETRMA) members. Overall this meant replacement consumer tyre sales were 2 per cent down on 2021. Commercial replacement tyre sales remained largely flat, except for the agricultural tyre market, which was down more than a fifth (-22 per cent), having been in contraction all year. Quarter four saw double-digit percentage falls versus the fourth quarter of 2021 as the effects of war in Ukraine, including spiralling energy prices and a continental cost of living crisis, bit. The European replacement tyre segment’s first half of the year had been relatively buoyant, with double-digit growth in replacement truck and bus tyres the highlight.